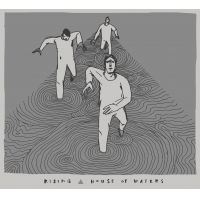 What you WILL hear from House of Waters is a synthesis of dense musical influences seemingly limitless in their scope. Together, Max ZT, classically trained on the dulcimer, and co-founder and bassist Moto Fukushima have astutely revolutionized a genre defying soundscape that encompasses a diversity of musical cultures dating as far back as the Renaissance. Cerebral in depth of composition and musicianship, House of Waters dares us to evolve, exquisitely and deftly bordering on the edge of comprehension. Drummer Ignacio Rivas Bixio rounds out the trio with opulent levels of percussion. Although "rounds" is not an appropriate word to explain the copious diversity of geometric shapes and sizes that emerge on Rising.