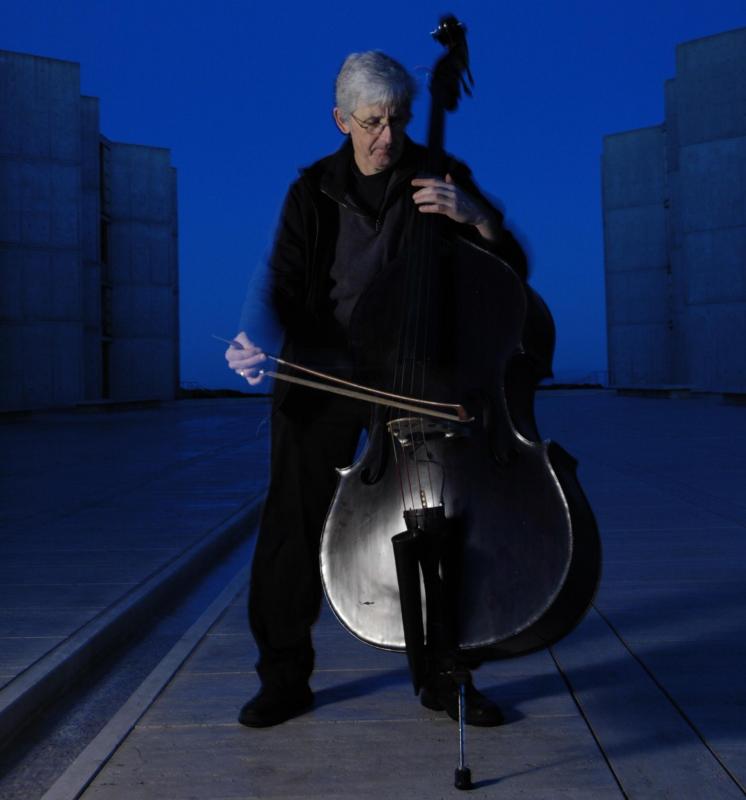 Double bass virtuoso Mark Dresser is a player whose expertise in multiple genres defies categorization. His is the story of the student becoming the maestro. Growing up, he was inspired by rock guitarist Jimi Hendrix, and bassist/composer Charles Mingus, and he began his formal studies with a classical music education—soon with Nat Gangursky, a pupil of Herman Rheinshagen, the man who mentored Mingus.

When it comes to jazz, he took lessons from Red Mitchell and Bill Plummer and a master-class with the inimitable Ray Brown while still a teenager living in Los Angeles. He moved to San Diego in 1971 to study with Bertram Turetzky—a mentorship that has served him well. He has the distinction of playing with the San Diego Symphony while simultaneously gigging with trumpeter Bobby Bradford, flautist James Newton and tenor saxophonist David Murray in drummer/music critic Stanley Crouch's Black Music Infinity in his early twenties.

The item on his resume that has brought him the most recognition is probably his nine-year tenure as a member of the Anthony Braxton Quartet. Along the way he has performed or recorded with trumpeter Leo Smith, pianist and composer Anthony Davis, trombonist Ray Anderson, and many others in the improvised music continuum. He relocated from New York six years ago to become a Professor of Music at the University of California San Diego.

Dresser has synthesized all of these elements to create his own highly personal musical language—one that tempers freedom of expression through the navigation of extremely complex melodic and rhythmic inventions that challenge those improvisers skilled enough to join him. While this may sound formal and intellectual, the prime effect felt by the audience at Dizzy's was one of joy. The concert drew some of the very best musical talent in town as audience members. It is a special event indeed when guitarist Peter Sprague, bassist Rob Thorsen, flautist Lori Bell, and KSDS "Free-Time" radio announcer Miff Mole all make the trek downtown early enough to occupy the first two rows, as they did that Sunday evening.

The ensemble assembled to interpret this incredibly intricate music was equally as impressive as the audience. On tenor and soprano saxophone, the under-sung horn avatar Tripp Sprague, whose association with Dresser goes back to the seventies when a government funded grant afforded them the opportunity to work together on a daily basis. Sprague has a warm, personal tone, a relaxed sense of swing and a very advanced harmonic gift. "What Tripp can do as a player," said Dresser, "cannot be taught: it's innate." San Diego drummer Duncan Moore has earned his reputation as a "first-call" drummer to the many traveling musicians who come to town. He can read anything (this gig required some serious reading) and he can play any groove. Michael Dessen of the excellent San Diego "free-jazz" co-op Cosmologic was another player who has deep roots with the bassist: they have both been performing "telematic" music with pianist Myra Melford for three years now. Dresser referred to him as a "black-belt" trombonist. The "young-lion" of the group is pianist Joshua White who began his education in music as both a classical music prodigy and a performer in his church's gospel music ensemble.

It is a testament to the respect these players have for Dresser's material that they put in four rehearsals for the gig. This concert had all of the elements that make jazz come alive. The music was full of gorgeous melodic content, very reminiscent of Mingus' long form work. Even larger were the complex ideas of "rhythmic substitutions." More on that later. If the music at this concert was simply complex for it's own sake, it might have been quite dreary. The gift of this performance was how seamlessly they incorporated all of these advanced concepts into something that just sounded completely fresh and innovative, yet was filled with the blues at every turn. That grounding supported every adventurous flourish. Mingus once said, "Making simple music sound complex is easy. It's making complex music sound simple that's hard." That is exactly what went down at this concert.

The evening began with "Rasa" (dedicated to Indian sitar-master Kartik Seshadri), which offered a long, winding melody that was tonal in nature but was enriched by Dresser's astonishing (and casual) interjections of his trademarked "double-glissando" technique. He cued all of the musical "signposts" from his position at the bass. Like many of the compositions played that night, this one featured Sprague and Dessen soloing at the same time. The combination of tenor and trombone was exciting and effective. It was hard to tell where the written material ended and the improvisations began.

Next was an incredible piece that Dresser introduced as a blues: "Digestivo." This showcased his very complex idea of "rhythmic substitutions," a notion he honed while studying with trumpeter Ed Harkins and further refined with drummer Gerry Hemingway while both were members of Braxton's quartet. Basically it's a concept that introduces constantly shifting measures of unusual time signatures while maintaining a 1-2-3-4 pulse. The net effect is to produce the illusion of the time contracting and expanding within the traditional constructs of a cyclical song-form. It's a tedium to explain but a joyride to experience. Drummer Moore characterized it as "very difficult music; I was hanging on for dear life at times, but I think we pulled it off." Quite so. The band often strutted through this tune with an intense swagger that Dessen exploited with his audacious use of the plunger mute. Dresser has been working on "Digestivo" since 1994!

The ensemble carried on with "Kind Of Nine" in which the soloists interpreted their form in 9/8 time, while the rhythm section juggled many differing sets of odd meters behind them. Again, it all sounded so effortless it was shocking to see the chart afterward. "Kind Of Nine" featured a terrific, inventive soprano saxophone solo by Sprague—he seemed to soar above the metric minefield with a perfect game plan. Pianist White was also an active participant—he was often the glue holding this material together. Dresser's music doesn't use chords in a conventional way: he examines the melody and experiments with clusters that develop or relate to the material, then he figures out what to call them. Whatever the specifics—White had a difficult assignment that he pulled off well. His Gospel roots came in handy for this often blues-drenched material—and on one feature, he sounded like a tonal Cecil Taylor, his hammering hands becoming a blur. He took his time developing a long, organic solo peppered with questioning chords and soulful accents. Dresser himself waited until "Kind Of Nine" for his first bass solo—and once he got there he didn't cut any corners—he exploded with rich, melodic content and many injections of extended techniques like glissandos, strange overtones and contrapuntal two-handed tapping.

Dresser's bi-tonal tapping led into the irrepressible South African groove tune, "Ekoneni," originally heard on his latest solo-bass CD, Guts (Kadima, 2010). The ensemble version fleshed out nicely: this tune was quite simply joyous, and drew out exceptional solos from each member of the quintet. Dresser captured the essence of South African music in supreme fashion—it brought to mind the music of Dollar Brand and Johnny Dyani.

After a short intermission (during which several of the musicians in the audience excitedly pored over some of Dresser's charts by the light of an iPhone), the ensemble returned for a second set, which began auspiciously with "For Bradford" (dedicated to the trumpeter Bobby Bradford). With this tune, the quintet swung hard. Pianist White unleashed a lyrical solo that brought Keith Jarrett to mind. Dresser's solo had him activating the hidden pickups embedded in the fingerboard of his bass, producing fantastical high-pitched overtones from low on the neck. It was visually confounding but musically superb. Like many moments in this excellent event, it constantly upped the ante on the surprise quotient.

Next up was the amazing ballad, "Para-Waltz." This one deserved a more beautiful title, as it had the most gorgeous melody. Dresser's sound on this one was huge, woody and raspy. There was a short soprano solo which was filled with quirky bent notes, then over to White who was on fire by this point. Dresser's solo featured him singing along with his bass lines—he ran through a series of bowed ascending "harp" and "false" harmonics before turning the song over to the band.

The concert continued with "FLAC" which in Dresser's words utilized a "kind of push and pull melody." Indeed, the tenor saxophone and trombone circled around each other like two prize-fighters in the ring—each one feinting and tripling up on the jab—whipping out combinations when the opportunity arrived. Drummer Moore got his chance, and he bore down with martial snare drum rhythms that churned the music ever forward. Trombonist Dessen also got an aggressive turn in: his blustery solo filled with raspy croaking a la Ray Anderson. "FLAC" definitely got the heart pumping.

It all came to a close with "Modern Pine" which was dedicated to the late great drummer Ed Thigpen. Once again, Dresser's melody seemed to go on forever, in the best possible way—it kept the audience leaning forward so as not to miss a note. Sprague took a sparkling, serpentine soprano solo, then White delivered an essay in swing, singing along with the constantly inventive and lyrical story that cascaded off his fingertips.

Watching this concert felt like witnessing the development of an entirely new advancement of small-group performance. Although it was grounded in elements of mainstream jazz, it was also an extension of the languages established by Charles Mingus, Ornette Coleman and Anthony Braxton. Excitement, surprise, the blues, all laid out with swing and swagger—what more could anyone ask for?