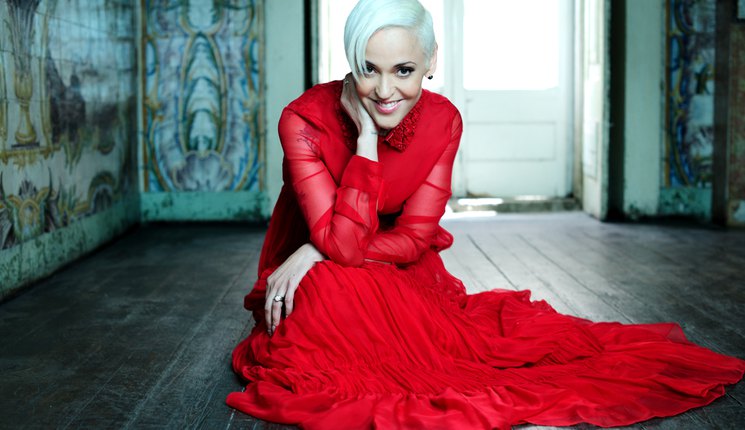 BY NENAD GEORGIEVSKI
September 9, 2016
Sign in to view read count
Listening to Portuguese fado singer Mariza, it's really hard not to be taken away by her passionate singing, charismatic stage presence, and sly sass. Yet, beneath her almost fragile and gentle appearance is a tiger waiting to spring. Ever since she burst onto the world stage 15 years ago, she swept the world with a fiery and emotional interpretation of songs belonging to the fado tradition. Linked with Portugal's rich maritime history, fado is music imbued with a sense of longing and lyrics that speak of love and loss. In Portuguese, the word denotes "destiny" or "fate." Its melancholic melodies are wrapped in beautiful guitar filigrees echoing joy and sadness at the same time. Mariza's breathtaking performances of fado standards have breathed new life into this music and basically, she reinvigorated and reintroduced this music to new generations of listeners worldwide.

Mundo is Mariza's first studio album in five years, as she had a child, and it's a landmark. In a way, it is a culmination of a musical evolution that has seen her expanding her vocabulary and the genre she works in. Over the years she branched out of the traditional fado and imbued her music with influences from Brazil, jazz, pop and classical. It's a journey taken through songs from Portugal, Cape Verde, Spain to Argentina. She took this journey with renowned producer Javier Limon who has also cross-pollinated the music of the artists he has worked with, most notably flamenco singer Buika or Ladino singer Yasmin Levy. But it's also an inward journey, a kind that showcases her newly found maturity and grace.

All About Jazz: What journey do you feel the songs on Mundo reflect?

Mariza: This is a record which took more than five years to make. I was trying to understand a lot of things in my personal and professional life. It feels almost like a record that was hand dress made because all my friends, who are Portuguese musicians, they got off together and they wrote some of the songs especially for me. This record is named Mundo which means "the world" not because of all the travelling and all the concerts. It's a "mundo" because I'm inviting all of this music to give an understanding of me now, in this moment, what I am and what I feel about music. It's about the person I am today.

AAJ: How has being a mother influenced the new record?

Mariza: I think all women when they have children start having a completely different outlook on life. And with me, it wasn't different. We feel more mature and we bear more responsibilities. We have a different perspective of feeling love or looking at the world. So, with me it's the same thing. Having a child influenced me tremendously and this is why this is a completely different record from the other one. I'm more mature and I feel I have a different understanding about everything.

AAJ: How did the collaborative process with producer Javier Limon work?

Mariza: Javier is a big friend of mine. He also worked on the album "Terra" and has always been very close. He is always calling to talk about his projects or to talk about music. It's a nice friendship, so when I decided to do this record Javier was the name which really, really first spring to my mind because he understands me so well. Sometimes producers make a mistake when they say "Oh she needs this and that." Javier tries to understand my ideas, my emotions and the situations I'm dealing with.

AAJ: The choice of songs encompasses different geographies and a various cast of authors. How were the songs assembled?

Mariza: This record features contributions by a lot of friends who had previously written songs that have appeared on my records. This record is different in the way it was written and composed especially for me and my voice. This is what makes the album so different than the others.

AAJ: Can you compare and contrast the approach you took to fado music on this record and the previous one, Fado Traditional? Both approach this music but in a completely opposing ways.

AAJ: What do you take into consideration when choosing and singing traditional material?

AAJ: How do you approach fado standards so that they resonate with today's audience?

Mariza: I never think about that. I just go on stage and sing. Fado is so transparent that I think people will understand it. Starting with my first album until today, people come to my concerts and they understand my music even though I speak a different language. So, I never think about how to make an approach when singing fado to achieve an additional effect. I'm just there. For me, it's the most natural thing to do.

AAJ: What was it about Fado music that made you decide that this is what you wanted to do?

Mariza: I never decided. It just happened. There was fado everywhere. It wasn't just sang in the tavernas, it was sang on the streets as well and the people who sang were everywhere in my neighborhood. I never had a plan where I was going to sing and do these things. It just happened. In Latin the word fado means "destiny" or "faith" and I think this was my destiny, my fado.

AAJ: What are some of the artists that have inspired you to take this route?

Mariza: Fado is basically an oral tradition. We listen to it on the streets and we learn it along the way. You either have the capacity and the ability for singing or not. So, all the voices that you listen to on the streets are lessons to be learned and they all taught me something from Carlos do Carmo to Amalia Rodrigues. All of them are teachers. It's a lot of names and a lot of voices in my head.

AAJ: How do you look back at your first record Fado Em Mim and the road you traversed from there?

Mariza: It happened 16 years ago and a lot of water passed has beneath the bridge. But I still sing songs from that album. It's my first album and it's my first baby. When I listen to it I hear a lot of things—the voice is so young. I think that "Mundo" is my best album when I compare it to others. But the road from Fado Em Mim to Mundo was very long. I really took the long route but it was very beautiful along the way.

AAJ: Many have pointed to you as being a catalyst for the renewed interest in fado music. What do you make of that?

Mariza: I never think of myself in that manner. I never think that I will make any changes or if I'm going to be commercial. Never. I'm just being myself. I think that's way music works. Music is more truthful when it is transferring your emotions rather than forcing things unnaturally. That way, I'm being more me and more close to what I try to do.