By Nicola Negri
September 9, 2016
Sign in to view read count 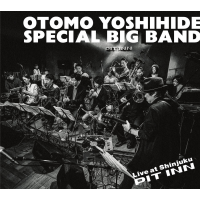 Is it possible to maintain impeccable avant-garde credentials and be a popular culture phenomenon? This is the case with Otomo Yoshihide, a central figure in the Tokyo improv community, known internationally since the late '90s thanks to his participation in the downtown New York scene alongside John Zorn and many others. The Japanese guitarist and turntablist has always conducted a parallel activity as soundtrack composer for film and television, and in 2013 his theme for the popular TV drama Amachan has become a huge hit in Japan, giving him exposure to a large audience probably unaware of his other experimental activities.

Live at Shinjuku Pit Inn documents a performance by his "Special Big Band"—the very same group that performed the Amachan soundtrack—and brilliantly mixes Otomo's many passions: jazz favorites by Charlie Haden and Eric Dolphy, quirky chansons like "Comme à la Radio" by Brigitte Fontaine, and his own work for a variety of films and TV shows.

Otomo's compositions highlight the exquisite pop sensibility of their author: the melodies are simple and lyrical, the orchestrations carefully conceived, the solos mostly developing the source melodic material. But there's always an element of surprise that gives even the most straightforward pieces a strange, adventurous atmosphere, like Sachiko M's alien sine waves on "Entertainment World" or Otomo's abstract, distorted guitar interludes punctuating the majestic "The Wages Of Resistance."

Eric Dolphy has been the subject of reiterated investigations by Otomo in the past, and three of his compositions appear also here. The opening section of "Something Sweet, Something Tender" is arranged as a woodwinds and brass concerto, employing gagaku (Japanese court music) harmonies to delineate the melody, before the orchestra enters at full force, the rhythm section rolling freely underneath. "Gazzelloni" is presented as a furious punk anthem, while "Straight Up And Down," one of the highlights of the album, divides the orchestra in small groupings, moving through a series of fiery solos—in particular Otomo's sharp excursions on guitar, Eto Naoko's angular piano statements and the nuanced marimba work of Uehara Nanae are outstanding—the overall structure governed by the leader's "conduction" through hand signals.

Before closing the album with the inevitable "Amachan's Theme," there's also space for a long, exhilarating rendition of the classic avant-song "Comme à la Radio," taken here at a faster tempo than the original, transforming it into an infectious latin number and taking advantage of the distinctive melody's articulations to continually push the excellent soloists forward.

Live at Shinjuku Pit Inn presents a more accessible side of Otomo's activities, while confirming how, despite the unexpected success of Amachan, he continues to be a voracious, adventurous explorer of the musical unknown.

Song For Che / Reducing Agent; Entertainment World; Something Sweet, Something Tender; OLO The Boy From Tibet; Gazzelloni; Umi; Straight Up And Down; The Wages Of Resistance; Years Of Solitude; Comme à la Radio; Amachan's Theme.