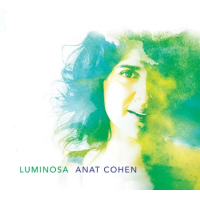 Anat Cohen's music is literally all over the map. Across her previous six albums, Cohen has explored the sounds of America, Brazil, France, Cuba, South Africa, and her homeland, Israel; she's addressed the work of John Coltrane, Antonio Carlos Jobim, Benny Goodman, Abdullah Ibrahim, Sam Cooke, Jacques Brel, Edith Piaf, Louis Armstrong, Ernesto Lecuona, Luiz Bonfa, and numerous others; and she's delivered original material that speaks to her ceaseless globetrotting. Here, she continues to explore a wide range of music, but there's a bit more focus on a single locale.

A strong Brazilian current runs through Luminosa. With three Milton Nascimento-associated pieces, two performances from a choro outfit, and key contributions from guitarist Romero Lubambo and percussionist Gilmar Gomes, many may simply look at this as a Brazilian-themed album. But that's not what this is. For Luminosa also contains a dimension-rich take on Flying Lotus' perky and mechanized "Putty Boy Strut," Cohen originals like the touching "Ima" and the excitable "Happy Song," and music that defies easy categorization. Luminosa, like every other Cohen release, is simply the artist's extension of self.

The aforementioned tracks prove to be album highlights, but there's lots more to admire here. "Beatriz," an intimate beauty that features Cohen's bass clarinet, is unforgettable; Choro Aventuroso—Cohen, accordionist Vitor Goncalves, guitarist Cesar Garabini , and pandiero virtuoso Sergio Krakowski—shines on "Ternura," which sings with a sense of longing, and "Espinha De Bacalhau," which comes off as sunny and gleeful; and Cohen's tenor saxophone makes for a good match with Gilad Hekselman's guitar on "The Wein Machine." Luminosa, like Claroscuro (Anzic Records, 2012) before it, manages to be both expansive and cohesive. It's another strong showing from one of jazz's shining stars.