Jack DeJohnette: Made in Chicago 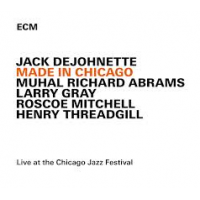 At one point on Made In Chicago, drummer—and occasional pianist—Jack DeJohnette announces, "We'd like to do something spontaneous for you." By then, spontaneity is a foregone conclusion. With a discography that includes almost two-hundred recordings, DeJohnette is best known among more casual listeners as one third of pianist Keith Jarrett's long-time trio. Significant though the role has been, it hardly represents the scope of his career or his musical proclivities. In 1965, along a group of local Chicago musicians and composers, DeJohnette helped found the still active Association for the Advancement of Creative Music. At the forefront of the original AACM were pianist Muhal Richard Abrams saxophonist Roscoe Mitchell and saxophonist and flautist Henry Threadgill. Together with the aforementioned, the quintet on Made In Chicago is filled by the versatile Chicago bassist Larry Gray whose work spans from the Chicago Symphony to saxophonist Branford Marsalis.

With this reunion of South Side friends and colleagues, DeJohnette has documented his purpose of re-connecting with his musical roots. Those roots are connected in the experimental and free jazz scene in Chicago of the 1960's, a time when free jazz was still widely vilified, even within the jazz community. However, there is nothing nostalgic in this live recording from the 2013 Chicago Jazz Festival. Of the seven tracks on Made In Chicago, one, "Announcement" is just that; a verbal set up to the closing number. The remaining six tracks clock in at well over ten minutes each, with the ironic exception of "Ten Minutes."

The set opens with the Mitchell penned "Chant" which moves from Abrams simple, dignified lines to forceful and enthralling group improvisations where melody minimized and the ensuing session builds to a feverish pitch. DeJohnette uses a hand-held mic to pick up the overtones of the cymbals on "Jack Five," an Abrams composition. The slower tempo piece has a warped floating feeling, anchored just slightly by Abrams and Threadgill's alto but once again, the piece takes off. DeJohnette's extended solo with its polyrhythmic intonations and variety of tones is exceptionally musical. Threadgill takes up the bass flute on Mitchell's neo-classically influenced "Think." Mitchell's bass recorder, Gray's cello and DeJohnette's disembodied thunder give the composition and ethereal feel. Abrams rolling blues and open harmonies dominate the early stage of DeJohnette's "Museum of Time," the most lyrical of the pieces on Made In Chicago. As on all the pieces in this collection, it eventually heads into abstract territory.

There isn't a venue that regularly gathers a more prestigious collection of progressive artists than does the Chicago Jazz Festival. DeJohnette, was given free rein to assemble a band and create a program and with the fiftieth anniversary of the AACM at hand he could not have paid a more fitting tribute to an organization that fosters imaginative thinking. More to the point of the music, to hear these veterans express the love of their work in a powerful, forward looking set that's not likely to be repeated.