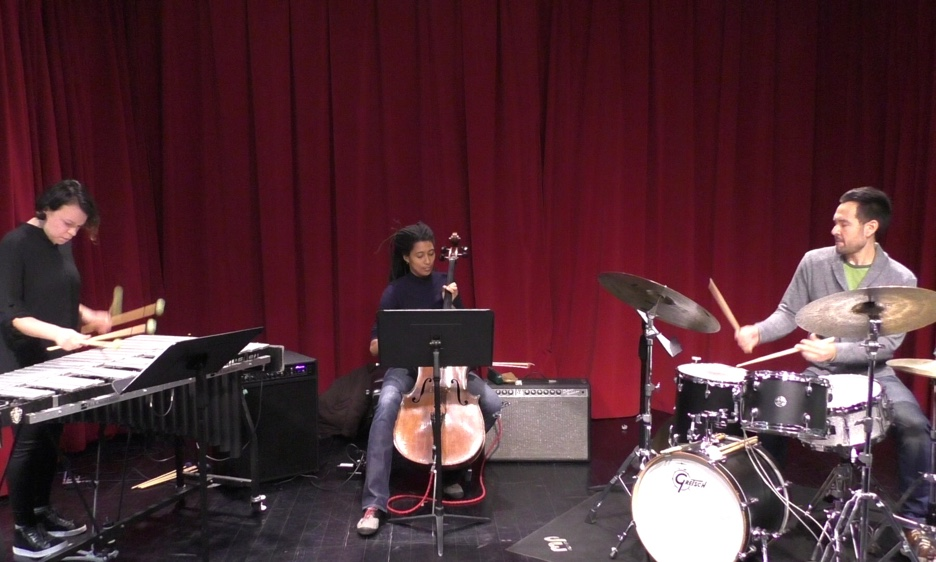 To assist with his investigation into tenor traditions, saxophonist Wayne Escoffery formed a full-thrust front line with Marcus Strickland and George Garzone, surely one of the most vibrant teams possible around current NYC clubland. The quintet was completed by bassist Yasushi Nakamura and drummer Kush Abadey. Their 10.30pm Saturday set created an expected frazzle of energy, with the Greenwich Village basement full to overflowing, a sold out proclamation on the street-door above.

The tenormen gambolled through tunes by Benny Golson and Elvin Jones, along with a few originals, the blowing session involving a rapid crossfire of solos. Each saxophonist kept their statements concise, passing the torch in speedy succession, taking turns in a continual circle of rising passion and increased technical dash. It was particularly exciting to find Garzone playing in a more straight ahead amphetamine-bop setting, although all three horners tended towards the inclusion of free jazz extremities, also adding bluesy grooves and soulful crying. Escoffery delivered an intense stream-of-consciousness solo, but Strickland casually picked up the gauntlet, alternating fast flurries with extended notes. Three tenor solos flew past in quick succession, with this structure repeated cumulatively. Garzone turned up the highest heat on the dial, tussling in duet with Abadey to cap off the second set of this controlled Smalls eruption.

Variations on the Charles Mingus large ensembles play each Monday night at the Jazz Standard, so there might be a feeling that these players are always around, though before we know it, we find ourselves marvelling at our diary track-marks, realising that we haven't actually been down there on a Monday for several years. It's always time for another Mingus session!

This week, it was the Mingus Big Band, although the Mingus Orchestra usually appears monthly. The accustomed strength of their numbers is particularly marked in the reed section, with Wayne Escoffery (again), Scott Robinson, and the lesser known, but still remarkable Jason W. Marshall and Alex Foster. Frank Lacy remains a central presence, on trombone and bonus vocal charisma. He dominated on "E's Flat Ah's Flat Too," a guaranteed pulse-pounder, with Marshall soloing on baritone, and Dave Kikoski also outstanding. He was so animated during this set, whether soloing or solo-comping, that he had the bearing of a muppet-creature, driven to a shaking ecstasy. Kikoski is simply one of the greatest pianists on the scene. Andy McKee made a talkative solo introduction to "Haitian Fight Song," then "Don't Let It Happen Here" featured an extended Burton tenor solo, complete with magnetic Lacy narration. The big band were in fiery spirits throughout the set. They are always a superb outfit, but surely this was one of the more exceptional Monday nighters. Can they be this great every week? Well, your scribe does recall similar sonic feats being performed during his last experience at this session, which apparently seems to be as far back as 2011.

Drummer and composer Tomas Fujiwara began a five night residency at The Stone, accompanied by cellist Tomeka Reid (he's a member of her quartet) and the less familiar vibraphonist Patricia Brennan. The scene was set for a meshing of chamber jazz, modern classical composition and improvisation, although most of Fujiwara's music sounded well organised in advance. All three players rose to an individual expression, working as a composite unit to deliver solo embellishments. Roles were malleable, as the listener decided whether everyone was soloing, or no-one. All three members were devoted to establishing a sensitive group consciousness, and they succeeded eminently.

Here's a relatively new venue, mainly an art gallery, and not too far away from the Brooklyn Museum. Such spaces normally feature harsh acoustic properties, not so suitable for drumkits, but HappyLucky No. 1 is quite intimate, and warmer-sounding than expected. Pianist Mara Rosenbloom played for a small audience at a place that still needs some effort to locate. If she'd appeared at one of the more established alternative joints, the numbers would doubtless have been greater. Nevertheless, saxophonist Stephen Gauci's Wednesday series here is helping to establish a strong reputation for the gallery-as-music-venue.

Rosenbloom was joined by tenor man Ras Moshe, bassist Adam Lane and drummer Jeff Davis. Jagged strikes were made with a telepathic union, cascading and shunting, Moshe and Davis finding a biting coincidence of attack, Lane groaning his bowed strings, his volume slightly upped for a solo interlude. Rosenbloom re-entered, dappling, whilst Moshe fluttered breathily, their progress passing from violent into serene, the pianist making birdwing cups with her hands, heading into a spuming almost-calypso section. The washes in Rosenbloom's patterns were constructed out of marshalled free phrasings. Explosiveness arrived once again, then a slugging, slow-drag sequence, like an interrupted blues-line. Attendance might have been sparse, but hearty appreciation emanated glowingly from the privileged few.

Ron Carter's Blue Note residency was originally scheduled for a Michel Legrand run, but the French pianist and composer cancelled due to illness. The dates became a celebration of his work, with bassman Carter's Big Band fulfilling the booking. Ultimately, the actual set (at least this day's 10.30pm second showing) didn't feature much actual Legrand work at all, but the audience were girded for a recalibration anyway. Looking across the ranks, we could espy that man Escoffery yet again, for the third time in this column. Carter was, as ever, a sharply besuited figure of benign authority, controlling via introverted strength.

Mostly associated with Joe Henderson, Carter's "Loose Change" had a lightly strumming guitar core, courtesy of Russell Malone, establishing a retro groove vibration. Pianist Donald Vega provided some emphatic riffing, and his presence was pivotal throughout this entire set, frequently soloing with gusto and flamboyance. The arrangements suggested a 1960s and '70s production style, taking the club back through a swirling vortex of time. It wasn't exotically extreme enough to be cool kitsch, but rather sounded slightly dated, with a faded period approach. Malone's empathy to the house style produced another well-suited nostalgia solo, and Escoffery made his tenor mark, yet again. In praise of Legrand, they selected "The Windmills Of Your Mind," a somewhat obvious choice, in a Bontempi keyboard Latin rhythm mode. Despite such observations, this set was still a slick, entertaining ride, scattered with juicy solos.