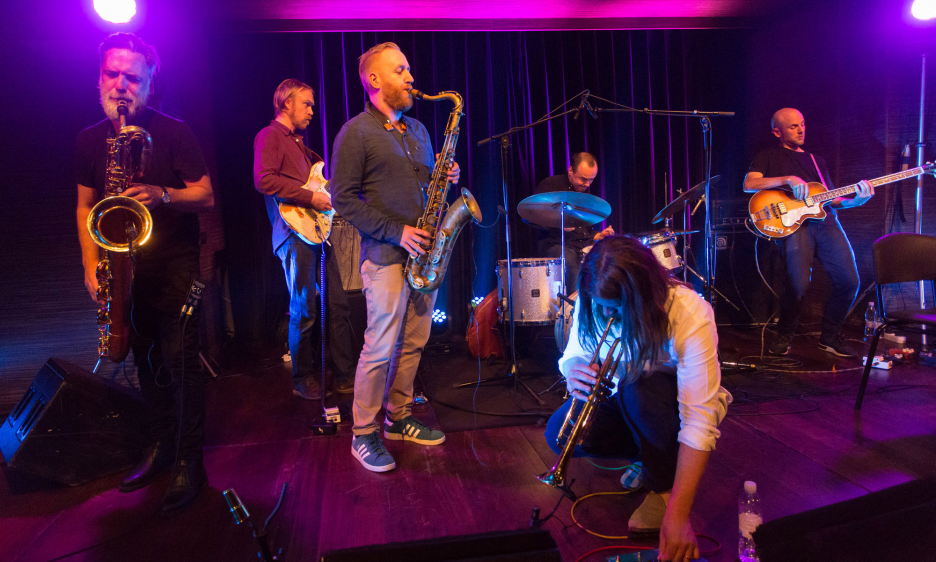 The Slovenian capital of Ljubljana has rightly become in the last few years one of the most loved tourist destinations in Europe. Hugged by its namesake river, crossing it with a variety of bridges, the city holds great artistic and historical memories, pleasant and wide green areas, great food and a positive, youthful vibe due to university students from all over the world. Reminding of Vienna in a smaller scale, has a rich cultural and musical life which includes the Ljubljana International Jazz Festival, one of the oldest in Europe, that will celebrate next year its 60th edition. But it is not any old festival—the European Jazz Network, a continent-wide association of presenters, awarded it this year with the Adventurous programming prize: the unique character of the festival is to be open for international directors, first the Portuguese Pedro Costa of Clean Feed fame, and now Edin Zubcevic from the Sarajevo Jazz Festival in Bosnia—also part of the ex-Yugoslavia but a very different city.

The festival is held in the Cankarjev Centre, the largest cultural centre of Yugoslavia, a huge building partially underground which despite some architectural excess—the marbled entrance halls especially—features a number of great spaces for performance, with excellent acoustic, top-quality equipment, comfortable sightlines and seating. And it's subject to intense usage since it holds more than 2.000 (two thousands) events in a year with more than 500.000 visitors (roughly twice the population of the city).

The program opened Wednesday June 27 with a double bill in the spacious, elegant Gallus hall. First the Slovenian musician Kristijan Krajnčan (who studied in Amsterdam) presented his own unique combination of instruments: he plays with equal facility cello and drums, alternating and sometimes at the same time. Compared to another other set by him that I saw, this time I found rather excessive the use of electronic sequencing in every single piece, leading to some monotony. But the closing evocative number with dancers Žigan Krajnčan and Gašper Kunšek was truly impressive. What followed, the Chris Potter—Zakir Hussain —Dave Holland trio, must be one of the world top jazz groups. An apparently effortless continuous flow of ideas in conversation, transporting the listener beyond virtuosity into the realm of timelessness. The sweet but sinewy grooves by Holland, the vertiginous variations by Hussain, the liquid lines by Potter intertwining in a delicate but perfect structure.

The program moved then out in the park, where in the middle of ancient plane trees the festival set up a stage and refreshing stand, for the concert of the extremely cool MTF feat. Sub-Lime band, a combination of two existing band into a coherent unity. Krajnčan was back at the trap set, accompanying rapper Murat, modern flamenco dancer Urška Centa, and a jazz quintet into a truly successful blending of languages into a new vibrant expressivity. Fusion in jazz is today's buzzword, and not a virtue in itself, but when it is successful brings the music into a new dimension.

Despite misgivings about the weather the second day also opened in the park, with the set by the ALEŠ Rendla sextet, a drummer-led band joining different generations of Slovenian jazz. The modern compositions were quite interesting, if a little diffuse at times, and the musicianship was first class, with brilliant solos by keyboardist Rebeka Zajc, saxophonist Primož Fleischman and clarinetist Aljaž Rendla. What followed was the December Soul trio, an Italian-Slovenian band featuring the master percussionist of Slovenian jazz Zlatko Kaučič, a key presence in many European Free Improvised music bands celebrating the 40th anniversary of his musical career with piano luminary Stefano Battaglia and Salvatore Maiore on bass. Maybe best suited to an indoor venue due to the intimate, delicate character of their music, the trio was nonetheless able to build an intense set with some breathtaking passages from lyricism to all-out energy music, and finally won the hearts of all but the most obdurate yappers in the audience. Due to pressing necessity of food and rest I wasn't able to follow the funk-meets-balkan set of saxophonist Lovro Ravbar with his Get On Board collective that sounded like great fun.

Friday's events started with the LORE quartet—a truly European ensemble, four young musicians from Slovenia, Italy and France living in Amsterdam. Singer Laura Giavon, alto saxophonist Pia Podgornik, baritonist Giuseppe Doronzo and drummer Tancrède Kummer presented an original program of carefully crafted compositions, using texts for songs that defied classification but left ample space for improvisation. Later in the day the presentation to the Adventurous Programming Prize was followed by a set of singer Rohey Taalah and her Norwegian band. The volume was so loud that since damaging what is left of my hearing is not something I look forward to I moved first away from the stage, and then away from the neighbourhood. Music that is meant to be listened with earplugs for me negates the purpose, so I will not comment on the music—the volume prevented me to listen to it. Did I mention that it was loud?

For the two final concerts of the day we moved to yet another venue, the CD Club on top of the Cankarjev Dom, a very pleasant room with a terrace and a breathtaking view of the city and the surrounding Alps, for two concerts that were nothing less than explosive. The spirit of Sun Ra is very much alive in the spectacular Subtropic Arkestra led by trumpeter Goran Kajfesfrom Sweden but originally Croatian. Goran's high profile collaborations include Fire! Orchestra and Angles 9; he quite startled me opening the first Cd of this band with a cover of Edip Akbayram's song Yakar Inceden, including its famous guitar riff, and then including several Turkish tunes in the second record, paying tribute to band like Muvaffak Falay's Sevda. They also covered a huge variety of pieces, from Weather Report to Soft Machine and Milton Nascimento in a series of brilliant records, but now moved to a repertory of original compositions, all performed with the trademark relaxed, spaced-out attitude of the band, a solid but easy-does-it groove over which solos grow, intertwine and develop. Think Lanquidity meets European Ethnojazz. A great set.

The Belgian/French trio formed by Manuel Hermia on saxophone, Valentin Ceccaldi on cello and Sylvain Darrifourcq on drums was equally impressive on a totally different vibe—the two concerts in fact set each other off in an example of successful programming. Ranging from timbral explorations to maniacal bursts of rhythm, the trio gave an all-out performance masterfully using dynamics and intense internal listening, with Darrifourcq especially successful in transforming the drum set into a timbral generator or a clockwork machinery gone amok.

The last day, Saturday, opened in the CD Club in the early afternoon for the classic presentation by Clean Feed and Pedro Costa, who miraculously brought to Ljubljana the Lisbon Underground Music Ensemble (L.U.M.E.) from Portugal. This a unique big band, not for the instrumentation but because the leader and composer Marco Barroso developed a specific and original style that could be described as big band swing meets funk. Played at ferocious speed and with impeccable precision the arrangements created unheard sounds with the resources of a big band; especially impressive were some waves of electronic-like timbres produced with the classic all-acoustic instrumentation enlarged by Manuel Luís Cochofel on flute and Paulo Gaspar on clarinet. Often coloured with humour and fragmenting in passages of free improvisation, the pieces opened spaces for brilliant solos, including a startling wa-wa trumpet offering by Jéssica Pina, but what remains in mind is the way that Barroso turned the tables on a well-established style.

To avoid overload I had to make some choices so I jumped the Rok Zalokar—Port Songs set to wait in the lovely round room of the Center for the Elifantree concert, which was a very pleasant experience. Powerful songs, great fun by all members of this Finnish trio lead by Anni Elif Egecioglu, of obvious Turkish origins, and such a pleasure to see a young woman assuredly in control of intimidating banks of electronics, pedals, synth and all while singing with such expression. By contrast the Saturday night concert by Dhafer Youssef was, quite frankly, embarrassing. Coupling oud and piano is in my opinion never a good idea, since the Arab instrument, progenitor to the European lute of the Renaissance, is forced to assume a guitar-like sound or to clash with the piano intonation. But there were deepest issues in a performance where the rest of the quartet were mostly left inactive on stage until they were called to act as props for the hystrionics of the leader. Never even trying to build a group sound, the show was totally self-centered and ultimately lacking any sense of an integrated musical experience, despite the very high quality of the sidemen including Azeri pianist Isfar Sarabski. A very early start the following morning forced me to leave before the end, but I was not unhappy to oblige, so my festival experience closed on a sour note, and could not listen to the following concerts by Bowrain, Shake Stew and Vasko Atanasovski's Melem featuring Bojan Zulfikarpasic that were extremely well received both by audience and by the many international professional guests who met at the festival.

The reader may or not have realized that in all the festival I have not listened to a single recognizable "jazz" tune from the "standard" repertory. All original compositions, or left-field pieces from odd corners. No tributes, not even recognizable quotations (from jazz at least—here and there classical or folk influences were floating by). It's a good sign for the vitality of the art form, and it does not matter if not all the tunes were masterpieces. The questions become—will at least some of this music solidify into a shared repertory? Do "jazz" still need it or can players meet in different ways? It's I think an interesting point that shows how good the Ljubljana festival was—a path of discovery that stimulated listening and thinking. I cannot think of an higher compliment to a festival program.