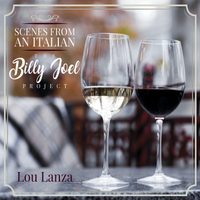 Lou Lanza is a charismatic jazz artist with a unique approach to his creativity. His 2018 album Scenes from an Italian: The Billy Joel Project is not about original songs, but it is actually about offering an original spin on the tunes of one of the most beloved songwriters of all time: Billy Joel.

Through his tasteful jazz arrangements, laced with subtle melodies and sophisticated grooves, Lanza set out to uncover the true core of Joel's infectious hooks, revealing the versatility of his compositions and making them shine in a very different context. The best songs out there always transcend their original settings of recording and release. In other words, a great song is a great song, no matter who will perform or record it -there is a very special essence that will always remain. Among the songs that have that unmistakable 'it' quality is "Hallelujah," made famous by Jeff Buckley, but originally written and performed by Leonard Cohen. Joel has a songbook that's filled with powerful and memorable songs that stand the test of time, and just like "Hallelujah," and will transcend different interpretative styles and performances.

Lanza's arrangements are filled with nuances and classy tones, and it will certainly please Joel fans while introducing the artist's classics to a jazz-loving crowd.

The Stranger; Modern Woman; Just the Way You Are; Shameless; Don't Ask Me Why; Rosalinda's Eyes; House of Blue Light; Zanzibar; Baby Grand; Scenes from an Italian Restaurant.