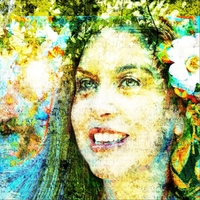 Easy on the ear does not necessarily mean easy on the consciousness. Many a sweet melody has served as a gateway drug to harder, horizon-expanding sounds. But Just One More Time, from UK-based vocalist Linley Weir, does not open any "doors of perception." Her brand of Latin-infused jazz-pop is safe as a bank vault. And, despite its lyrical themes of "love, loss, family relationships, and self-confidence," the music comes across as far too stately and refined to be at all cathartic.

The title track features a double bass solo that is at jarring odds with his bass playing elsewhere on the album. Where his bass-lines flow seamlessly, his solo is jagged, rough-cut. Against the smooth polish of Weir's composition, it sticks out like a broken limb. Her own deep contralto is a strong contrast against the glistening production and gentle accompaniment. Weir's voice has the potential power of a gale. But is reined in on "Just One More Time. " Brought down so it merely shakes leaves in its breeze.

The easy Latin-vibes of a track like "Island In The Sun," add to the chilled atmosphere. But they are rendered un-exotic and familiar on this record. All the rhythmic accents that signify the exotic are present and accounted for, just as they are on countless records and in countless lounges. Everything is done right for all the wrong reasons, rather than vice-versa. So what would once have been different is now conservative. And what would once have been smooth, is now sickly and hard to swallow.

On "Mr. Black," Weir almost hits the mark. Her vocals make their presence felt through her powerful delivery. Not forceful or domineering, but strong and independent. However, it is offset by the following track "Lover's Dance," where the exotic-by-the-numbers rhythm makes the track seem lifeless when it should inspire lust and movement. Just One More Time is an album that, in attempting to bridge genres and cultures, simply plays up to stereotypes. Not in a discriminatory manner. Just an unadventurous one.

Jazz has always been about moving forward. But Just One More Time harkens back to a time when the world wasn't as connected as it is today, when any hint of the exotic was welcomed as refreshing, exciting and unique. Linley Weir has connected those dots that reveal an exotic postcard. But she has not drawn her own picture.