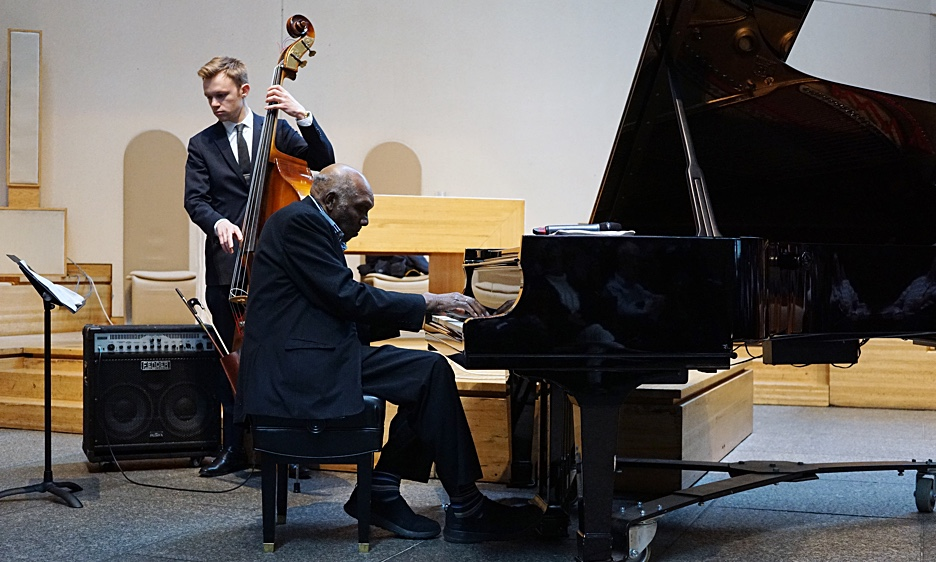 Following their residency at The Village Vanguard, two-thirds of The Bad Plus remained in the club for another week, teaming up with saxophonists Tim Berne and Chris Speed to form Broken Shadows. This quartet is dedicated to the music of Ornette Coleman with a faint streak of Berne's mentor Julius Hemphill. The roots of this group came out of Spy vs Spy (Elektra, 1989), John Zorn's album featuring Berne. Drummer Dave King has also worked with Berne as part of the Buffalo Collision quartet.

Coleman's original works were frequently negotiated at a hair-raising rate and crisscrossed with simultaneous soloing, making speedy shunts into new rhythmic constructions or dodging down melodic alleys. Broken Shadows intensifies this approach through a familiarity born from decades of these classic compositions bleeding into their bones.

Early in a rushing set of highly compressed detail, they rested for a spell with "Peace," letting some space and light into their heads. Yet hellbent exultation soon returned. King was scuttling and snicking at a manic pace, always a proud upholder of precision, the master of ricochet assault. Everyone in the band made intricate connections exactly synchronized as a composite Ornettian mind. Berne and Speed matched alto and tenor contortions, soloing tight and citrusy with bottomless bags of breath. "Civilization Day" was another standout. Of course, Coleman's famous "Lonely Woman" (initially without drums) closed a set that seemed much shorter than its actual length: it was so gripping that the tunes rattled and wheeled through without pause for observant timepieces. Broken Shadows could not have given these great songs a better new life, operating at such maximum levels.

Every Wednesday at 1 pm, Saint Peter's Church in Manhattan presents Midday Jazz Midtown, an hour-long set programmed by Ronny Whyte that is invariably well attended. Harold Mabern is one of the greatest pianists on the scene: technically exciting, extremely outgoing and loaded with anecdotes from his rich life of 83 years. This looked to be a solo set, but Mabern was joined by bassman Vincent Dupont, who was subtle for much of the set but leaned forward for a few pointed solos. Dupont used to be Mabern's student. It is clear that the pianist is an articulate, firm, energetic and humorous guide.

Mabern played tunes by Hank Jones and Clifford Brown, including a slow, thoughtful rendering of Brown's "Daahoud." Mabern also improvised on "Home On The Range," not unveiling his source material until the conclusion. Unfortunately, Mabern did make too many song quotations during each number, not just including fleeting snippets but entire chunks of other pieces (such as the horrific Steely Dan song "Do It Again").

Mabern's mind works as fast as his fingers. Dupont opened "My Favorite Things" with an extended solo, prompting Mabern to look at his watch. Ultimately, the showcase did not extend too far as the bassist imaginatively constructed its progress. Once again, we might almost forget which tune they were hearing, but the theme returned in force to close this brief set filled with masses of well-formed notes!