BY JEFF DAYTON-JOHNSON
August 29, 2012
Sign in to view read count 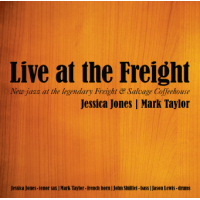 Live at the Freight chronicles a June 2011 date at the venerable Freight & Salvage coffeehouse in Berkeley, California, co-led by tenor saxophonist Jessica Jones and French horn and mellophone player Mark Taylor. The compositions, all originals and mostly quite good, are split between the two leaders.

The first slightly unusual twist to the quartet is the presence of the French horn, rather than a trumpet. Saxophonist Jones makes the case for the French horn this way: "Trumpeters don't go to a pillowy place very often. They stay piercey." Pillowy rather than piercey is a good way to characterize Taylor's playing, and it softens the sound, perfectly in keeping with the low-simmer, talking-rather-than shouting, unhurried groove of the conversation captured on the record.

There are hints here of bassist Charles Mingus' "Celia" (in "Breath.Eyes"), and saxophonist Yusef Lateef's "Like It Is" (in "Waynopolis"), and a lot more than just hints of the music of saxophonist Ornette Coleman. The altoist's imprint can be heard in the laconic half smile hidden in the theme of the lovely "Waiting for the Vampire's Redemption," or in the way the soaring horn melody is somehow untethered from the busy bass and drums underneath in "By the Park at Midnight."

But Coleman's influence is felt more profoundly in the way Jones and Taylor master the "controlled freedom" that fuelled Coleman's early harmolodic masterpieces in the early 1960s: a mix of empathy, close listening and blues oozing out of every pore. This demanding interplay is the source of Live at the Freight's most lasting delights.

On some numbers, like "What Purpose Is Your Pain," Jones and Taylor interweave their horns contrapuntally in the statement of the melodic line, like Coleman used to do with pocket trumpeter Don Cherry, or indeed, like saxophonists Paul Desmond and Gerry Mulligan on their Two of a Mind (RCA, 1962). It's a practice, piano-less, that hearkens back to the original New Orleans lineups. On "The Zamindar Gambit," the leaders' solos seem to speak to each other: Jones circles in around the melody oddly, catlike, as multi- instrumentalist Eric Dolphy used to do; when Taylor's turn comes, he sidles up to the melody in the same way.

The strong sense of fellow-feeling extends to the excellent bass of John Shifflet and drums of Jason Lewis: their Latin-like dual solo on "The Zamindar Gambit" is among the record's highlights.

Shortly after recording this concert, Taylor was diagnosed with a neurological condition that may prevent him from playing in the future. The sad news is rendered more poignant by the excellence of this record. Throughout, the playing on Live at the Freight is marked by an abundance of good ideas and the patience to allow those ideas to develop fully and cooperatively.

Furious George; Waiting for the Vampire's Redemption; By the Park at Midnight (Zamindar's Promenade); The Zamindar Gambit; Waynopolis; Manhattan; Sketch #2; What Purpose Is Your Pain; Breath.Eyes.