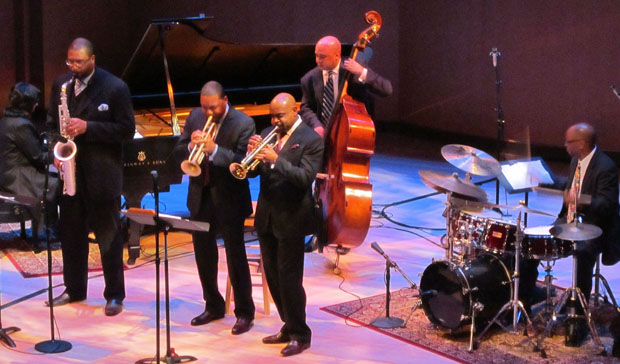 An evening of bebop, swing, Latin and blues celebrated acclaimed drummer Lewis Nash and raised funds for youth programs of Jazz in Arizona. The 35-year-old nonprofit jazz-support organization recently opened The Nash, a performance and youth education center established in Phoenix to honor the musician in his hometown.

Nash's innovative percussion during the 45-minute set ranged from graceful swing to bombastic fuel. He was especially intriguing during solos with drumsticks, while his brush work on heads and cymbals was intricately composed. His cliché-free delivery created a diversity of rhythms and timbres, without abandoning the fundamental role of drummer as timekeeper. The audience definitely dug Nash even more when he injected a bit of humor, first clacking his crossed sticks in mid-air, the next time pantomiming the move to elicit a wave of chuckles.

The concert opened with Marsalis and Nash delivering a purely perfect trumpet-percussion dialogue on "Lady Be Good" that was sparked by an ear-bending scat segment. Both donated their time and talent for the concert, Marsalis later stating that even though both had arrived in New York in the early 1980s, they had never played a gig together until this night.

Segments of speeches and awards to event supporters followed. Then Marsalis joined the all-stars on Oscar Peterson's stop-tempo "Hogtown Blues" that featured another Nash scat excursion in "Clark Terry-meets-Al Jarreau" style, producing a roar of crowd approval. The final chart was the dreamy ballad "Goodbye," which Nash said he played with singer Betty Carter after she hired him from an audition tape. Marsalis delivered his trademark sweet heat, while Nash played as softly as a prayer to enthrall the audience.

The musical performances were preceded and dotted by speeches and thank-yous to donors (the audience of 300 included young jazz students attending with tickets underwritten by sponsors). Guest emcee Todd Barkan, director of programming for Dizzy's Club Coca Cola for Jazz at Lincoln Center, presented a series of video-taped tributes to Nash by Bill Cosby, Randy Weston, Ron Carter, Tommy LiPuma and George Wein.

Nash's former Arizona State University classmate, saxophonist Allan Chase, now on the Berklee School of Music faculty, reminisced about their student performing years, saying the drummer's achievements came "from hard work driven by love." An early mentor, Arizona pianist-educator Charles Lewis, recalled Nash's role in the late 1970s on the growing Phoenix jazz scene. When Nash spoke, he credited Lewis and pianists-composers Prince Shell and Keith Greko with giving him opportunities to perform while still a student. The concept of student involvement was sustained during a pre-concert performance by a young trio from Arizona State University, with Chris Pena on piano, Andrew Schiller on bass and Wes Anderson on drums.

The evening ended with commentary by Herb Ely, the philanthropic founder of The Nash, who linked jazz with the American civil rights movement. "Our nation's greatest injustice gave birth to our nation's greatest cultural achievement," he said, adding that "The Nash is a place to continue our expression of freedom through jazz, and especially to cultivate young musicians and audiences."