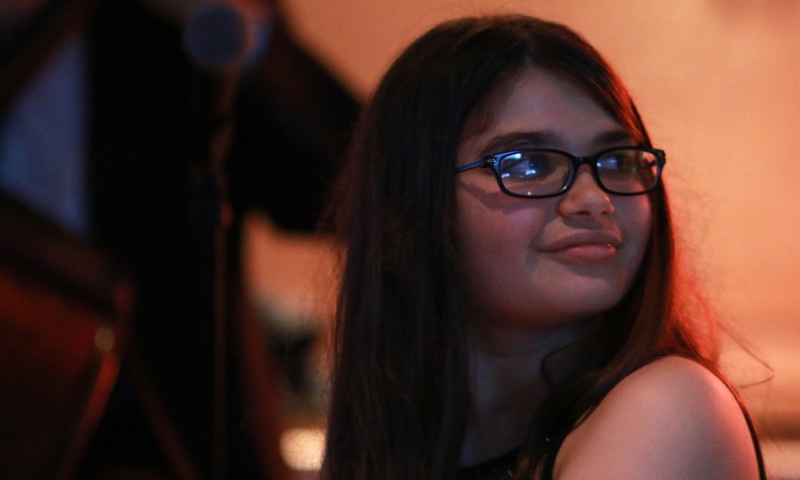 By DAVID A. ORTHMANN
July 27, 2016
Sign in to view read count
The setting is a living room in a suburban northern New Jersey home. For the most part, it's filled with things not necessarily available at the furniture outlets that line the local highways. An upright piano takes up most of the wall adjacent to the front door. A harpsichord spans the area between the entrances to the kitchen and the dining room. A comfortable sofa is placed between a Hammond B-3 organ and a Leslie speaker. It is clearly a space where the "living" in living room is synonymous with making music. And for this occasion, a rehearsal for keyboardist Leonieke Scheuble's upcoming, three-day recording session, a full set of drums and a conga are positioned close to the center of the room.

Leonieke ("lay-o-nee-ka") is on a summer vacation before entering her freshman year in high school. She is the daughter of Theresa, an engineer, and Nick, a jazz drummer, composer and bandleader who has been active in area venues for over thirty years. Inspired by the Ray Charles biopic, Ray, she took up the piano at age six, and has been at it ever since. Enamored of the blues and soulful sounds in general, everything Leonieke plays is in the service of making music in the moment. Her shy, quiet demeanor belies an inquisitive mind and a determination to solve musical problems on her own terms even while navigating the art of jazz performance, an intensely social practice. I recall an incident from a few years ago, during her father's Sunday morning gig at a local farmers market, where, between sets, Leonieke was encouraged to try out Ron Oswanski's portable Hammond organ. When she sat down there was nothing tentative or child-like in her approach to the instrument. Here was an old soul intent on playing everything for keeps.

In the past few years, Leonieke has received an impressive amount of support from the jazz community. In 2013 she won the International Women In Jazz "Youth In Action" Award. In 2015 she was the "Best Up-and-Coming Young Artist" Hothouse [Magazine] Award winner (see video below). The legendary Rudy Van Gelder engineered Debut, Leonieke's first commercial CD, in his Englewood Cliffs, NJ studio. The Hammond B-3 organ in the Scheuble's living room was a gift to her from a 2017 National Endowment of the Arts Jazz Master, Dr. Lonnie Smith. For several years she's studied with the noted jazz pianist, Steve Ash, and has received valuable advice and assistance from Bob Belden, Antoinette Montague, John Girvin, and Champian Fulton.

Father and daughter work their way through the harmonic structure of the standard "These Foolish Things," talking and playing while Max, Leonieke's younger brother, wanders in and out of the room, having fun with Jasper, the family dog, and occasionally landing a few light hits on the conga. Nick and Leonieke anticipate the arrival of bassist Tim Givens, who has worked most of Leonieke's live gigs and played on Debut. Without any prompting Nick comments that Givens "hears everything," and Leonieke adds, "he's so easy to work with." As if entering on cue, Givens arrives, bass in tow, and readies himself to rehearse. Both Nick and Givens have been on the receiving end of rear end automobile collisions, and a brief dialogue ensues about the insurance payout for vehicles of a certain age.

A solo order is briefly discussed, Leonieke counts off a tantalizingly slow tempo, and the trio begins "Please Send Me Someone To Love." She offers blues effusions on the tune's melody, and during her solo Givens tactfully wraps his bass around her lines. Givens' improvisation is both closely related to the material and highly individualistic. Leonieke finds a climax of sorts on the out head of the song. The trio replays the ending, just to make sure it works to their satisfaction. Another coda is conceived on the spot. Nick explains that all of today's effort is a means of devising just enough structure to walk into the recording studio and play. He emphasizes that nothing is etched in stone, and things that sound fine during a rehearsal are often subject to change.

In preparation for the recording, Nick and Leonieke have been conceiving arrangements on three fronts—the piano trio, the trio plus two different vocalists and, for the last day of recording, the addition of three horns and a guitarist while Leonieke plays the organ. Much of the material has been road tested in various live performances. The actual task of writing the arrangements for the horns and guitar session is the responsibility of saxophonist Andy Farber, who will join the group in the studio for production assistance—and perhaps play a solo or two—on one of the three days. Only seconds before starting "You And The Night And The Music," Leonieke briefly turns her head away from the piano and laughs at Jasper's antics with a chew toy. The trio takes the tune at a middling tempo, Leonieke and Givens solo, and there are four bar trades between Leonieke and Nick. The drummer, who has a nice, affable way of questioning his own playing and decision making, asks "Am I too loud?" The immediate answer from both Leonieke and Givens, neither of whom is playing with any amplification, is "No."

The next couple of selections are arrangements for the trio and vocalist Dyahnah Wilson, a young, gospel influenced singer who Leonieke met at a rehearsal for a performance at the Nuyorican Poets Café in New York City. Wilson was unable to make today's rehearsal, so the trio is faced with the task of working through the material without her. "Goodnight My Love" is taken as a languid ballad, with Nick humming the melody in lieu of the vocal. After the first run through Givens questions some of the chords and their sequencing on the sheet music. He makes some changes that they'll get back to Wilson for her approval. At one point Nick asks, "Does my hi-hat sound too pronounced? Does it sound too much like a metronome? Will the time sound solid enough if the hi-hat is eliminated?" After they play the tune again Givens and Leonieke vote to leave the hi-hat in.

The second of Wilson's numbers, "Mean To Me," is executed at a middling pace. Leonieke plays the melody in Wilson's absence. She has a nice, taut way of phrasing the tune. At this point in the afternoon I've all but forgotten the novelty of Leonieke's age, and I'm simply enjoying her work. She's holding her own in the company of two seasoned professionals. It's also interesting to think that rehearsals such as this one—where changes are made on the fly, and flexibility is essential to making successful music—are an essential part of her education as a jazz musician.

Next up is the African American Spiritual, "Wade In The Water." It's the most difficult arrangement of the rehearsal. Among other things, it's comprised of two different bass lines, one a Montuno rhythm played by Leonieke's left hand, and the other executed by Givens' upright bass. Eventually it evolves into a swinging blues in D minor. The first take, featuring solos by Leonieke, Givens, and Nick on conga, sounds good, but everyone agrees that the form of the arrangement is much too long. A discussion between three minds and musical sensibilities ensues. Despite the dissatisfaction with the initial result, there's no tension or anxiety in the room. A second, trimmer version is played, but once again they believe that it is excessive in length. Eventually, Nick and Leonieke agree to table the arrangement for now, and in the next few days they'll go back and work on it again.

Early on during a selection tentatively referred to as "Leonieke's Untitled Slow Blues," the music sounds more like a real performance than a rehearsal. Taken at a pace so slow that, Nick quips, you can drink "a cup of coffee between beats," Leonieke sounds patient and authoritative, gradually building to climaxes. Nick starts with brushes and eventually switches to sticks. Givens plays more notes than usual, giving the trio a fuller sound. Everyone is genuinely happy with the take in general and Leonieke's playing in particular. Nick mentions the possibility of adding a tenor sax solo by Andy Farber on the recording.

At the beginning of a dinner break, the conversation turns to the perils of getting hit up by scam artists in New York City. Nick tells a story and then Givens adds one about a friend of his. Leonieke stays at the piano and offers a gospel-fueled solo version of the standard "Georgia On My Mind." Her improvisation is emotionally on target and structurally cogent. During dinner Theresa and Natasha, Leonieke's older sister, who is majoring in Vocal Performance/Opera Studies at Purchase College, Conservatory of Music, join us. The conversation turns to less harrowing topics while Stanley Turrentine and the Three Sounds play on the dining room sound system.

The first item on the post-dinner agenda is a version of Cole Porter's "So In Love" that features Natasha's vocal. Nick executes bossa nova rhythms with a combination of a stick and brush, and Leonieke plays a neat introduction. Elegant and relaxed, Natasha's voice is in perfect control, as she handles Porter's lyric in a rich, flowing manner. Leonieke's solo displays elegance not unlike her sister's, as every note firmly occupies its own space. Once again, it's easy to forget that this is a rehearsal in which ideas are accepted, altered, or rejected, rather than a performance in a club or concert hall. The spell is temporarily broken when Nick suggests that they try the song again, this time with his conga instead of the trap set. He asks Leonieke to play a little more assertively while accompanying Natasha, and she responds with keen phrases that don't interfere with the silky quality of the vocal.

Natasha gets right to the essence of Gorney's and Harburg's, "Brother, Can You Spare Me A Dime?," one of the best-known songs of the Great Depression. After Leonieke's introduction, she sings the lyric in a straightforward manner, and maintains an emotional connection to the poignant words by humming a solo. There's a touch of desperation that the song demands when she returns to the lyric.

The evening's activities conclude with the trio's version of Horace Silver's "Nica's Dream." Nick, Leonieke, and Givens debate whether they want to incorporate a shout chorus into the arrangement. The first time Leonieke's solo includes a long, slow trip down the keyboard. The second time they utilize a shout chorus that encompasses Nick's conga solo and some stick (on the drums) and conga combinations. While saying their goodbyes, everyone sounds pleased with the results of the rehearsal. And while there's still some more preparation to be done, Leonieke, Nick, Givens, and Natasha are well on their way to making memorable music in the studio.