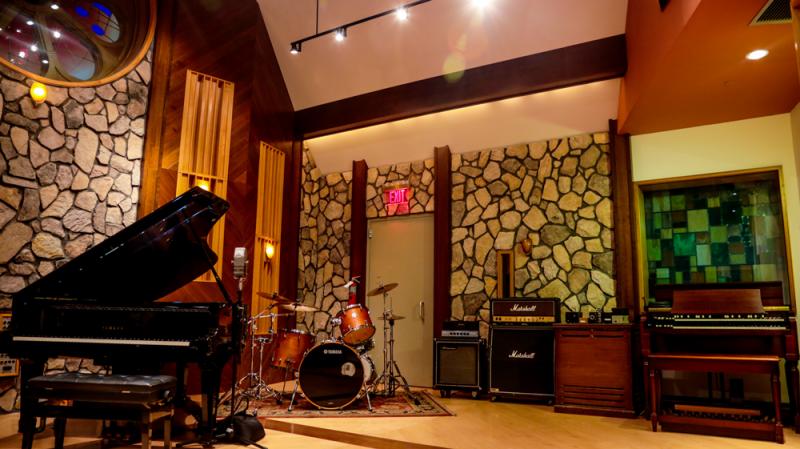 Day 2 commences with only Nick, Leonieke, Givens, and Gillespie inside of Studio A. The instruments and mics in the live room and isolation booth are still intact from yesterday's session. While everyone sits in the control room, Nick asks Gillespie to playback "Please Send Me Someone To Love." The balance between the three instruments, as well as the strength of the individual performances, is striking. Nick and Givens agree that it was an excellent take. Nick then calls for Farber's solo on "Brother, Can You Spare Me A Dime?" He notes that the element of "frustration" in the improv goes well with the lyric. "Don't delete that one," Givens jokes, looking at Gillespie. Even though Nick loves Natasha's vocal and Farber's solo, he wants to take another crack at "Brother." Call it a willingness to stay open and explore all possibilities, rather than dissatisfaction with anything thing he hears. Nick expresses concern about his own efforts on "You And The Night And The Music." He likes the "edgy quality" of yesterday's take, but wonders if his drumming is "too much." Everyone assures Nick that his playing isn't overly assertive.

Back in the live room, Nick sets up a conga in anticipation of recording the African American Spiritual, "Wade In the Water." Gillespie follows with a mic specifically for the drum. The arrangement of the song—devised by Nick and Leonieke—is, in part, comprised of two different bass lines, one a Montuno rhythm played by Leonieke's left hand, and the other executed by Givens' upright bass. Eventually it evolves into a swinging blues in D minor. The immediate concern is deciding on a suitable tempo. Instead of moving to resolve the issue, Nick offers a temporary diversion by suggesting that they play the theme song from a recent James Bond movie. "Just something for the future," he says with a smile before the three of them casually run down the tune.

After resuming "Wade In The Water," Nick makes a brief trip to the control room to check on how a cymbal he's added to his drum kit sounds in a playback. Leonieke uses the down time to play a slow blues. When Nick returns he asks her to avoid trying to replicate the tempo for "Wade" they've rehearsed at home. "Go with the tempo you feel like playing today." After the first take, Givens suggests that they do another, "just for fun." When Nick makes a joke about his obsessiveness when it comes to detail, Givens quips, "How do you buy a car?" The easy rapport between the three of them bears an uncanny resemblance to a rehearsal in the Scheubles' living room. The second take highlights the delicious disparity between the Latin and swinging blues elements of the arrangement. Leonieke offers a keen contrast in dynamics when hard, authoritative chords rapidly yield to lower volume single notes.

Leonieke's solo piano on "Georgia On My Mind" requires some mic adjustments. While Gillespie makes the changes, Nick snaps some photos of Leonieke at the piano. Since this combination of mics is particularly sensitive, Gillespie asks Nick and I to leave the live room. Leonieke plays the first and only take. Back in the control room she's satisfied with the playback, and Givens adds his approval. Nick briefly talks about feeling "beat up" after yesterday's session. Though he never shows any outward signs of the pressure, it must be taxing to juggle the demands of making music in a studio environment while attempting to produce takes that sound fresh and spontaneous. Back in the live room, they make quick work of a successful take of Horace Silvers "Nica's Dream," and a rewarding return to "You And The Night And The Music."

The feeling of the Scheubles' home that's been in the air for most of the day is made complete when Theresa, Natasha, and Max enter the break room with food. For awhile all of the decision making and effort that goes into producing the record is put on hold in favor of some family time. Displaying the concentration and attention to detail that characterizes his father's and sisters' artistic endeavors, Max is busy creating a large drawing of a dinosaur which includes spelling out the word "dinosaur" several times, followed by groups of four or five numbers. Today's topic of discussion is both speculative and practical: In terms of improving one's skills in a given endeavor, is it better to dwell on strengths or weaknesses? Pros and cons of both approaches go around the room. Theresa speaks to concentrating on strengths as a means of extending and developing them to the fullest.

The post-break activity begins with Natasha's singing "So In Love." Once again, she's positioned in the isolation booth and everyone is wearing a headset. The sisters flash wide grins to one another through the glass barrier. Amidst the relaxed bossa nova groove, Leonieke lays down a relatively simple foundation that nearly sounds complete without the sound of Natasha's vocal. Back in the control room, Nick intends to focus on the effect of his cymbals, but notices that the tempo has sped up during the course of the take. A brief discussion ensues and the matter is quickly settled. Regarding her interpretation of Cole Porters lyric, Nick asks Natasha to "imagine a scenario with your boyfriend." He pauses as if having second thoughts, and says with a laugh, "I don't want to know about it!" I stay in the control room for the second take. Natasha conveys Porter's words with a sincerity that doesn't sound cloying. Immediately before the third take, Theresa blows kisses to Natasha through the control room window. Givens does an admirable job of providing an underpinning as well as tastefully filling brief gaps during Leonieke's solo.

Looking for a contrast to yesterday's performance, Nick calls for a take of "Brother, Can You Spare Me A Dime?" Natasha's vocal is nothing short of stunning. There's absolute conviction in the way she delivers the lyric. I ask myself, how can a nineteen-year-old capture the essence of the pain, suffering and injustice of the Great Depression? The moment passes and, once again, they're listening to "So In Love," which leads to a final take at a slightly slower tempo.

Having exhausted the material intended for today's session, the trio revisits familiar songs, tries some new ones, and listens to previously recorded takes. Though there's still a considerable amount of inspired musicianship, it's evident that their energy is on the wane. They take another crack at "L's Blues." Nick's brush strokes glide under Leonieke's piano and, during her solo, his pinpoint ride cymbal rhythm with a stick gently but firmly delineates the tempo. Playbacks of "Nica's Dream" and "You And The Night And The Music" meet with everyone's approval. Nick remains dissatisfied with the ending of a take of "Wade In The Water," but for the time being lets it go. Leonieke casually begins to play Stanley Turrentine's "Sugar," a selection they've planned for tomorrow's sextet session, and they do one take. Without any intention of putting it on the record, John Coltrane's "Mr P.C.," featuring Nick's invigorating solos atop Givens' walking bass line, is played twice.

From the control booth, Gillespie suggests a return to the James Bond movie's theme song, and suddenly they're playing for the sheer fun of it. Givens says, "That can turn into some good," and Nick adds, "It has possibilities." Still uncertain about their previous effort on "Wade In The Water," they all agree to another take. A brief spasm in one of Nick's hands brings things to an abrupt halt. When they begin again, there's real joy in the room as everyone, particularly Leonieke, is focused and inspired. Theresa requests something with a groove, and they briefly work on Herbie Hancock's "Cantaloupe Island." Leonieke finds some interesting rhythmic variations of the chords.

Nick declares, "We're done, I'm done," bringing today's session to a close. Max comes into the live room and gives his father a hug. On his last day in the studio, Givens gets special thanks from Nick and Leonieke. Over the past couple of days, the bassist's superior musicianship, the ease in which he handled the session's stops, starts, and changes in direction, as well as his dry sense of humor, were genuine assets.