Leonieke Scheuble is a gifted pianist and jazz organist who has a rare talent for blues and jazz improvisation at an unusually young age. Born to an engineer mother and a musician father in 2002, she was given a Dutch name after her parents lived in the Netherlands on assignment and developed an affection for Holland and the Dutch people. Her namesake is the Dutch pianist, Leonieke Vermeer.

Leonieke (phonetically pronounced “lay-o-nee-ka”) started to play piano sometime after being inspired by “Ray,” a movie based on the life of Ray Charles. Without any prior musical training, she began to spend great lengths of time at the piano creating songs that were rhythmically interesting and compositionally balanced. This was at age 5 or 6.

At age 7, Leonieke recorded a handful of pieces including two of her own compositions. This was brought to the attention of Steve Ash, a highly respected Jazz pianist, who then agreed to take her on as a student. She has been with him ever since. As her love of Jazz, Blues, Soul and Gospel motivated her to develop her musical skills, Leonieke has been receiving a great deal of attention and is afforded some wonderful opportunities.

Among them would be winning the 2013 International Women in Jazz “Youth in Action” Award (eligible to female jazz musicians under 18 years of age) presented in performance at “The Jazz Church” (St. Peter’s Church in Manhattan). Other performances followed though The IWJ, Jazz Foundation of America and “Rome Neal presents.” She has also performed in fundraisers for The Un-Domiciled Project (Brooklyn, NY), American Cancer Society (Rockaway, NJ) and The Victoria Soto Memorial Scholarship (Woodstock, CT).

A two-time featured artist at The Watchung Arts Center with the Beacon Hill Band, Leonieke was also featured at the 2012 FusionFest, and has performed in several Jazz Vespers along with Steve Turre, Tim Ries and Bill Crow. She is often invited to sit in at various New York City Jazz Clubs.

Two world class jazz organists have played a pivotal role in Leonieke’s development. The first is Joey DeFrancesco who introduced her to his Hammond B-3 at Dizzys Club Coca-Cola in February of 2011. The other is Dr. Lonnie Smith, who in July of 2012 met Leonieke and watched a youtube clip of her performing on piano. After learning that she had an interest in jazz organ, he arranged for a Hammond organ to be delivered to her as a gift. Earlier that year, Bob Belden, (former A&R Blue Note records) introduced her to Herbie Hancock and has since become a mentor (Belden), guiding her mainly through recordings. Radio station WBGO Jazz 88.3FM featured Leonieke in interview along with trombonist Coleman Hughes in an hour long special entitled, “The Future of Jazz” (10/2/13).

On October 13th 2013, she recorded her debut CD engineered by Trustees Award Grammy winner, Rudy Van Gelder, widely recognized as one of the most important engineers in music history. She returned to his studio again on November 17th and was joined by Jazz legend, Jimmy Cobb (drummer on Miles Davis' “Kind of Blue”). It was during these sessions, recorded in the same studio and by the same engineer that “A Love Supreme” and countless other jazz classics were recorded, that Leonieke was able to play on the exact organ that her main influences, the great Jimmy Smith and Ray Charles, recorded on.

That organ, referred to as “The Old Girl” by Jimmy Smith can be heard on Leonieke's first professional recording entitled “Debut” released in January 2014.

She is joined on that recording by Tim Givens on double bass. Her dad, Nick Scheuble and Jimmy Cobb split the drum responsibilities, and her older sister, Natasha, contributes two selections on vocals. Maureen Sickler assisted Mr. Van Gelder in the engineering booth and the very gifted composer/pianist Cecilia Coleman produced the recording.

Leonieke aspires to continue to perform professionally, grow musically and compose more of her own music.

Note: A month after Leonieke’s “Debut” release, Joey Francesco let her sit in with his band at Birdland and the nightclub has since added her CD to their house music system. - See more at: http://www.leoniekescheuble.com/biography.html#sthash.PVRtq7Mp.dpuf Show less 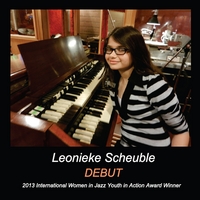 All About Jazz musician pages are maintained by musicians, publicists and trusted members like you. Interested? Tell us why you would like to improve the Leonieke Scheuble musician page.