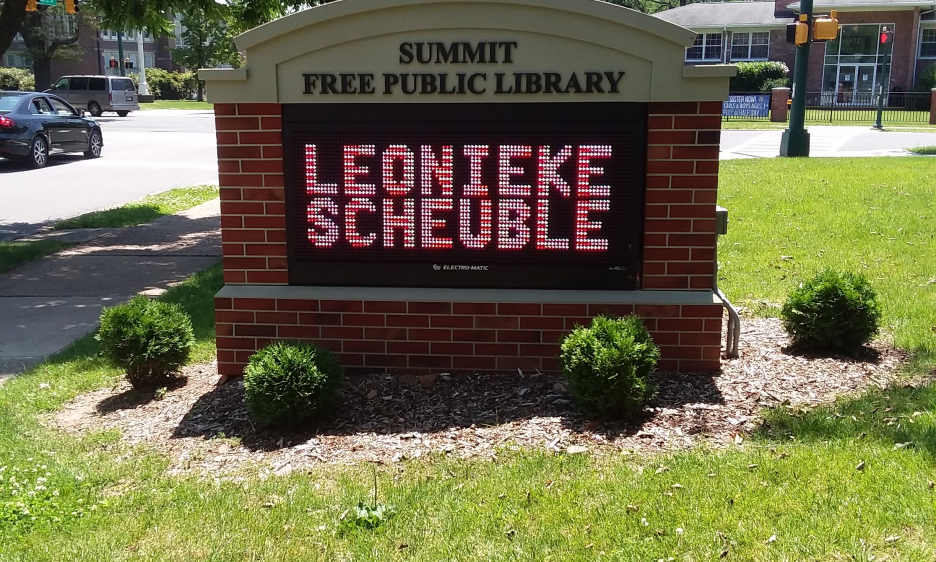 BY DAVID A. ORTHMANN
July 29, 2019
Sign in to view read count
Located right in front of a train station, the South Orange Gazebo is an uncommonly boisterous location for a jazz concert. Whistles blowing, brakes screeching, trains arrive and depart every ten minutes or so. Automobiles access parking lots via a rotary about fifteen feet away. Their horns and sound systems blare as drivers compete for space. The South Orange Fire Department building stands across the street from the gazebo. On a warm evening in late June, the blast of a departing fire engine's siren adds to the clamor.

It's a real challenge for any musician to cope with such cacophony, induce at least some of the commuters to stop and listen, and keep the regular attendees of the Downtown After Sundown concert series in their seats. While some performers might be tempted to simply crank up the volume and offer music of the lowest common denominator, Leonieke Scheuble, a seventeen-year-old pianist who just completed her junior year in high school, earned an enthusiastic response from the crowd without attempting to compete with the racket, dumbing down her sound or resorting to theatrics of any kind. During the course of two seventy-five minute sets Leonieke held their attention by playing a brand of jazz that appealed to casual listeners and aficionados alike.

South Orange was one of five places in Northern and Central New Jersey where Leonieke led bands during the month of June. These performances presented a unique opportunity to scrutinize her musicianship in venues populated by audiences of varying ages and degrees of familiarity with jazz. By and large, the people in all of these places reacted to her music in similar ways. From makeshift bandstands near the stacks of the Roxbury and Summit libraries, to the basement room of Tavern on George (under the auspices of the New Brunswick Jazz Project), to Van Gogh's Ear Café in Union, audiences usually listened attentively, often applauded vigorously, weren't shy about giving verbal encouragement, and a surprising number of people indicated their approval through bodily movement.

The appeal of Leonieke's music lies in a number of factors. Perhaps the best place to start is her repertoire. In the span of nine sets spread out over the five gigs, she played upwards of thirty different selections. In addition to her originals, "L's Boogaloo" and "Sunday Night At Shanghai," the material encompassed Soul Jazz favorites ("Dat Dere," "Moanin,'" "Sugar"); Latin Jazz compositions ("Cubano Chant," "Morning," and "Sofrito"); selections from the Great American Songbook ("Angel Eyes," "Softly As In A Morning Sunrise," "These Foolish Things," "Deed I Do"); Jazz Standards ("Senor Blues," "Billie's Bounce," "In A Sentimental Mood"); as well as Spirituals ("Wade In The Water," "I Want Jesus To Walk With Me").

Apart from the breadth of her selections, the manner in which Leonieke inhabits and makes herself at home in each genre is genuinely impressive. She sounds utterly authentic—as well as very comfortable—executing swing (in a number of tempos), Latin beats, as well as funk and ballads. Leonieke displays an impeccable grasp of the degrees of their rhythmic complexity. Her take on "Cubano Chant," "Morning" and "Sofrito," for instance, sounded like different dialects of a Latin-oriented musical language. Another factor is her insertion of blues inflections throughout almost all of the material. One example of many is the insertion of a brief, bluesy run in the middle of an otherwise introspective ballad treatment of "Angel Eyes." And, lastly, there's nothing casual or perfunctory about Leonieke's approach to the songs. She never hastens through a tune in the manner on someone who is itching to take a solo. A ballad interpretation of the melody of "Willow Weep For Me" was a complete, satisfying performance in itself. It's evident that Leonieke hasn't just dutifully learned all these songs; rather, following in the footsteps of many distinguished jazz artists, she has taken the time to bond with and internalize them.

Leonieke's improvisations combine a logical chain of thought with a sense of certainty that never sounds forced, self-centered, or arrogant. "Softly As In A Morning Sunrise" and "Dat Dere" contained good examples of solos in which she evinced genuine authority and created excitement right off the bat. Leonieke never takes an especially long solo and, even during her most imaginative flights, retains a connection to the song. Convoluted tangents and displays of technical wizardry that might leave the listener impressed but emotionally distanced are noticeably absent. Moreover, she doesn't have to go full bore to be very effective. A solo on "Morning" proved that she's capable of generating excitement at a relatively low volume and without playing an abundance of notes.

Leonieke's swing always feels rooted to the bass and drums rather than indecisive, casual or flyaway. There's an ongoing sense of contrast and cooperation going on between her left and right hands, particularly on the Latin-oriented material. Despite the relative density of what she's playing both hands give each other some space rather than fight for attention. She has a penchant for changing dynamics fairly often and in various ways; that is, in emphasizing a particular section of a tune; building to a climax; or, simply becoming louder or softer in the course of a few bars or even a single phrase.

While Leonieke certainly was the focal point of each of the five performances, it's important to emphasize that she didn't dominate the music. Listening to and interacting with sidepersons was as important to her as playing the tunes and improvising. In part because her presence wasn't overwhelming, the music as a whole breathed and sounded playful even during particularly intense moments. Throughout the heads and her solos Leonieke left ample space for bassists—Jennifer Vincent (Roxbury), Todd Coolman (Summit and New Brunswick) and Ed Fleischman (South Orange and Union)—each of whom stepped up and made essential contributions to the ensemble as well as distinguishing themselves as soloists. Her witty chordal and single note comping during the bass solos added spice without getting in anyone's way. It was also gratifying to hear Leonieke assume the role of a smart, sensitive accompanist for the vocals of her sister, Natasha Scheuble, on "Angel Eyes," "Cry Me A River" and "Brother, Can You Spare A Dime." As expected, her "Angel Eyes" solo didn't upstage Natasha's vocal or take the music to another place.

The drumming of Nick Scheuble, Leonieke's father, stayed in the thick of things throughout every selection of the nine sets. In an age when many trapsters assume the role of brash, pushy instigators, Nick's sticking and footwork radiated wisdom gleaned from decades of study and working with Jazz and Latin bands throughout New Jersey and New York. He's not a drummer who knocks you out with technical prowess and audacity; he's the guy who consistently makes you shake your head and think, "That was exactly the right thing to play." Aside from consistently keeping good time, Nick's contributions included deft interactions with Leonieke and the bassists (during the South Orange gig, he and conga player/percussionist Chuggy Carter often finished each other's phrases); tastefully evoking nearly every conceivable texture on a four piece set of drums, cymbals and a conga, by striking heads, rims, cymbal stands and shells with combinations of sticks, brushes, hands and mallets; and executing four and eight bar breaks as well as extended solos, all of which stayed in character with the material yet often sounded highly idiosyncratic.

Apart from the satisfaction of taking in nine impressive sets of jazz, it was a pleasure to witness the host of ways in which one audience in particular expressed appreciation for Leonieke and her band. In the midst of so much extraneous noise and activity the people in South Orange made certain their support could be seen and heard. Commuters leaving the train station and approaching the gazebo smiled and applauded in response to "You And The Night And The Music." A man standing about ten feet from the band juggled his car keys in time to "L's Boogaloo." The crowd spontaneously clapped and cheered when Leonieke kicked off "Sofrito," and erupted again in the middle of her solo. Someone yelled to Leonieke to "wait for the train" to get out of earshot before she introduced a song. A number of people chanted "Sing, Sing, Sing" as a means of encouraging Natasha to perform. Applause and whooping began to build well before Leonieke ended "Moanin,'" the final number of the night. Could a young jazz musician ask for anything more?