Beginnings sounds as if it's guided by an old hand instead of someone relatively new to the demanding art of leading a band. The debut recording of trumpeter Bruce Harris captures a coherent, homogeneous group sound, while utilizing several different combinations of instruments. Harris ties together material ranging from Harold Arlen, to Bud Powell, to Prince, ...

Many a debut album receives a largely positive critique before being cut down to size with a qualifier. It's simply a jazz journalist's nature to paint newcomers as nascent talent in need of seasoning, players showing signs of potential, or artists taking a good first step with a first record. But sometimes a debut album is ...

Rehearsal | Part 1 | Part 2 | Part 3 When I walk into the live room, a little early, on Day 3, Gillespie has already swapped out the piano for a Hammond B-3 organ and Leslie speaker. Three boom mics are positioned in the area closest to the window to the control room. ...

Rehearsal | Part 1 | Part 2 | Part 3 The Barber Shop Studios are located on the West Shore of Lake Hopatcong, a body of water spanning about four square miles, which makes it the largest freshwater body in New Jersey. The immediate neighborhood is a patchwork of bungalows, upscale homes, newly constructed ...

Los Angeles songwriter and vocalist Steven Davis, finally reveals a non-holiday big band vocals album of his own with the swinging The Way You Look Tonight following in the tradition of great singers like Frank Sinatra, Tony Bennett, Sammy Davis, Jr. and others. This is traditional big band swing with a new voice interpreting the standards ... 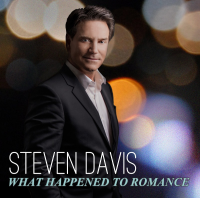 Jazz crooner Steven Davis ponders “What Happened To Romance,” his first big band album due June 23, led by the original song featured in an international television commercial. Nashville, TN: Bolstering the belief that romance is always en vogue, crooner Steven Davis plies his big voice backed by a big band on the swinging set “What ...