American jazz drummer Justin Page, born in New York City, started playing at the tender age of 8. In 1978, at age 11, he was the youngest musician ever to perform in the Newport Jazz Festival.

He graduated from the High School for the Performing Arts in New York City, and then attended Manhattan School of Music for Composition.

Justin was named a U.S. Presidential Scholar in 1985, the first jazz musician or drummer ever to be so named.

Justin Page Drums
"Justin Page is a drummer who understands that less is more. Most musicians take a lifetime to learn this"

From: Lost and Found
By Justin Page 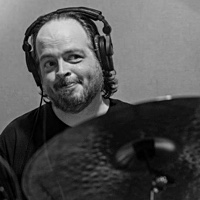 All About Jazz musician pages are maintained by musicians, publicists and trusted members like you. Interested? Tell us why you would like to improve the Justin Page musician page.