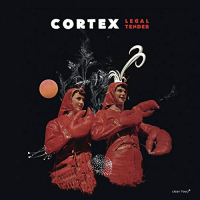 The Norwegian quartet Cortex answers the question, what would have happened if the Wynton Marsalis and Branford Marsalis, had advanced the jazz canon instead of looking backwards for inspiration. Remember when the two young lions burst onto the scene in the 1980s with their self-righteous mission to save jazz? They did so by stuffing it, much like a taxidermist, to preserve an endangered species. Their neocon approach actually can make us grateful for bands like Cortex with their inclinations to push jazz forward into the 21st century.

Legal Tender is the band's sixth disc, with the last four released on Clean Feed Records. It follows Avant-Garde Party Music (2017) and Live In New York (2016). Like the previous discs, Cortex is on a mission to entertain and engage listeners. Like their other releases, trumpeter Thomas Johansson (Paal Nilssen-Love Large Unit, Friends & Neighbors, Jon Rune Strøm Quintet) has written most of the compositions heard here. The opener, "Anthem For The Uneasy," recalls not Ornette Coleman's quartet but its offspring, Old And New Dreams with Don Cherry, Dewey Redman, Charlie Haden, and Ed Blackwell. The ceremonial two horn lineup, Johansson plus saxophonist Kristoffer Berre Alberts (PNL Large Unit, Saka, Snik) blow forth a ceremonious entrance procession over the formal mallet pulse of Gard Nilssen's (Bushman's Revenge) drums.

The music is both urbane and tuneful. "GTM" swirls speedy bebop, drunk dancing a with unlaced shoes, while "I-95" marches, all-business, until Johansson tears into a muscular solo. A much different solo from the extended technique he displays on bassist Ola Høyer's (The Way Ahead) composition "10-4." His scuffing/scraping overblown trumpet pairs with the tumbling and endlessly falling gravitation of the piece. It is Høyer that opens the sly "Blue Gromka," which produces a noirish gambit under his beefy pulse that snowballs into a musical colossus. Cortex retains memories of Ornette Coleman, Sonny Rollins, and Charles Mingus, while speaking a language of the future.