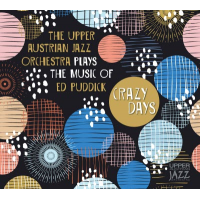 The opener / title track of this album could well be taken to refer to Britain's 2016 referendum on whether or not to remain in or leave the European Union, for the disc's second half, and its main event, is composer Ed Puddick's thirty-five minute "The Brexit Suite." In fact, Puddick was thinking about something else when he wrote "Crazy Days." But the two words neatly sum up the chain of events which led to a small majority of voters—a majority bolstered by every racist, xenophobe, cultural reactionary and petty nationalist in Britain—voting to leave the EU. It may well prove to be the greatest self-inflicted wound in British history. Time will tell. (But take heart: nothing lasts forever).

The task of telling the Brexit story, or indeed any linear story, through a series of wholly instrumental big-band orchestrations is a tough one. Broad emotional brushstrokes are as close to narrative as the format allows. Literalist composers sometimes employ spoken word to bridge the gap, but Puddick wisely rejects any such temptation. The suite begins with "June The 23rd 2016," the date of the referendum itself. Its vibe is upbeat, curiously so unless you read the liner notes for the track, in which Puddick writes that "Whatever their viewpoint, people were optimistic of better days ahead." The next three tracks—"52% Major 48% Minor," "Article 50" and "Withdrawal Agreement"—could be about anything, including the pure joy of writing arrangements for a top-drawer seventeen-strong jazz ensemble—but the closer allows no doubt about where Puddick's sympathies lie on Brexit. "Prorogation" is a desolate, heartrendingly sad piece that could only be a remembrance of something tragic. At 7:18 it is not the longest track on the album, but it is without a doubt the most affecting and it is a small masterpiece.

Puddick teaches jazz composition and arranging at London's Guildhall School of Music and Drama and the Royal Birmingham Conservatoire, where he was a student between 2000-2004 and where one of his composition tutors was Michael Gibbs, who has since become his friend and mentor. Gibbs is one of the giants of British jazz, who in the early 1970s was among those London-based composers who reinvented big-band orchestrating for the post-rock age. Puddick refers to the arresting character of Gibbs' music in his liner note for the track "Slow News Day," writing that Gibbs' piece "And On The Third Day" was always one of his, Puddick's, favourites. The good news is that the Gibbs album which included "And On The Third Day," his debut, Michael Gibbs (Deram, 1970), is one of those scheduled to be reissued on audiophile vinyl as part of Universal/Decca's 2021-2022 British Jazz Explosion: Originals Re-Cut program.

Bittersweet Postscript: In 1995, when Britain was still in the EU, Michael Gibbs wrote the arrangements for and conducted the orchestra on Joachim Kuhn's beautiful Europeana: Jazzphony No. 1 (ACT). A collection of folk music from all across Europe, the album was a celebration of the diversity, and the underlying unity, of European culture. A truth that is anathema, of course, to the Little Englanders who voted leave in 2016.