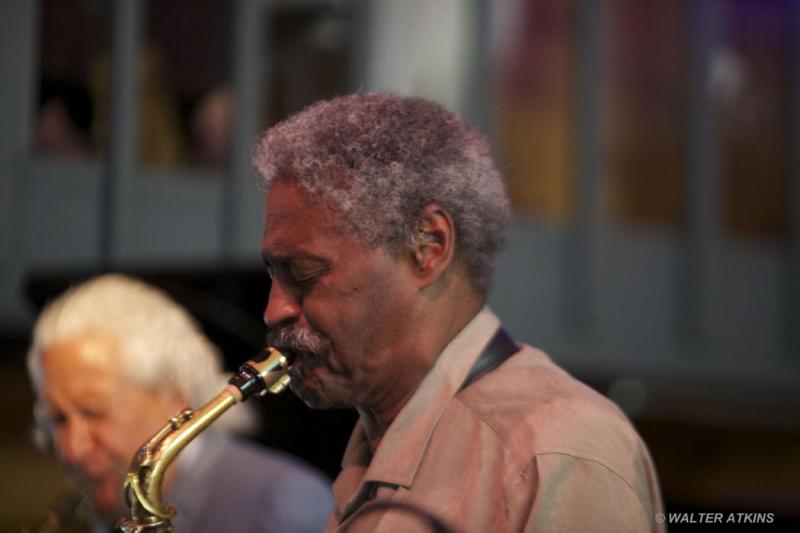 BY WALTER ATKINS
August 6, 2017
Sign in to view read count

Take care of the music, and the music will take care of you
—Todd Barkan, Keystone Korner Founder

In July 1972, young pianist Todd Barkan opened the storied Keystone in the City's North Beach neighborhood. Located near the City's Central police station, the small intimate club quietly began it's historic eleven year run. The venue's name was inspired by the 1900's Hollywood movie Keystone Cops and referenced the existing station. During that extraordinary period, the venue grew and hosted an unrivaled Who's Who of jazz on the west coast. After providing some of the world's finest jazz for over a decade, the Keystone was shuttered in 1983 for economic reasons.

Fast forward to July 2017.The first show of the fantastic musical triumvirate jumped off Friday night at the cozy Kuumbwa Jazz Center, located seventy miles south of San Francisco in downtown Santa Cruz CA. The second round took place Saturday afternoon at the beautiful beach front Bach Dancing & Dynamite Society in Half Moon Bay. The final gig was held the same day at San Francisco's Pier 23 Café on the busy Embarcadero water front. I covered the Half Moon Bay date and later the SF set. As a famous '70s rock singer once said, "Two out of three ain't bad!"

Zeitlin opened with a solid solo piano set. Back in the day, he was in medical school in Baltimore Maryland and, "looking for a place to play to maintain my chops." He continued the tale of meeting a local club owner with a son who also played there. To his pleasant surprise, he discovered the young gifted saxophonist Bartz.

Barkan graciously introduced the members of Bobby Hutcherson's family to the overflowing audience. He also shared a story about Sonny Rollins only playing for twenty nine minutes one night. We he asked him about it, the saxophone colossus said, "Don't call it a set. Let's call it an episode." The attendees roared with approval.

Bartz and the other artists then joined Zeitlin. The august group played jazz standards and a "ballad medley." Fortunately, there was no prearranged song list. With the consummate musicians on the bandstand, improvisation among friends was easy and the music just flowed. According to Barkan, "We really had no "set list" for any of the Keystone concerts. Everything was decided at the spur of the moment of creation. The songs that the cats played were: "Moment's Notice," "I Should Care," "Last Night When We Were Young," "You And The Night And The Music," "Alone Together," "Easy To Remember," "But Beautiful," "Billy's Bounce," "Calling All Spirits," "Bright Moments," "Now's The Time" , "Walk Spirit, Talk Spirit," "Lonnie's Lament," "Simone," and "Makin' Out."

All the band members' solos and blithe interplay were impressive through the breezy afternoon. One of the last tunes was the 1931 Klenner/ Lewis jazz staple "Just Friends." Both guitarist Hashimoto and Kawamura gave the music fans competent solos. The unexpected treat here was Atsuko Hashimoto's energetic B3 organ solo that propelled the band into an extended version of the track. It brought the lively crowd to its feet for a massive standing ovation.

At the Pier 23 Café, Barkan talked about the idea for the anniversary and some of the key people involved with making it happen. They included Tim Jackson, musical director for Kuumbwa who jumped at the opportunity, San Francisco Chronicle music critic Joel Selvin and many others.

The comments for both concerts ranged from succinct to effusive. Toni, an East Bay resident proclaimed, "It was fabulous!" Karen, her traveling companion added, "I thought the Keystone show was amazing. The musicians continued the show at Pier 23, which was one of the best jam sessions I've ever seen. Back to back groups playing non-stop. They were still playing when we left. I also ran into Denise Perrier in the audience, who was leaving (she must have sung before we got there). I recognized her and told her I was a long time fan. She was so nice and gracious."

Musicians and singers have always preferred locations that provided encouraging environments that contributed to their elevated performances. On a first visit to Santa Cruz's KJC just a few weeks ago for a Stanley Clarke Band appearance, I appreciated Clarke's comments about musicians loving to play there and it's inviting atmosphere. The old Keystone reflected the same positive vibe. My good fortune was to have been there in 1982 for the explosive Art Blakey And The Jazz Messengers. It was also surprising to find my coworker was a serious jazz aficionado and he wanted to catch the current version of the Messengers, then boasting both Wynton Marsalis and Branford Marsalis. It was several years later when this photojournalist discovered the live session had been recorded as Art Blakey And The Jazz Messengers, Keystone 3 (Concord Jazz, 1982).

The all star list of seasoned artists and their amazing performances for Keystone Korner's 45th anniversary provided an unprecedented tribute to the Keystone, and was a living endorsement of San Francisco and the jazz community world wide. Owner Todd Barkan's unwavering philosophy summed up the spirit and support of Keystone Korner's 45th anniversary. The words on his business card simply captured the marvelous musical weekend: "Take care of the music, and the music will take care of you."