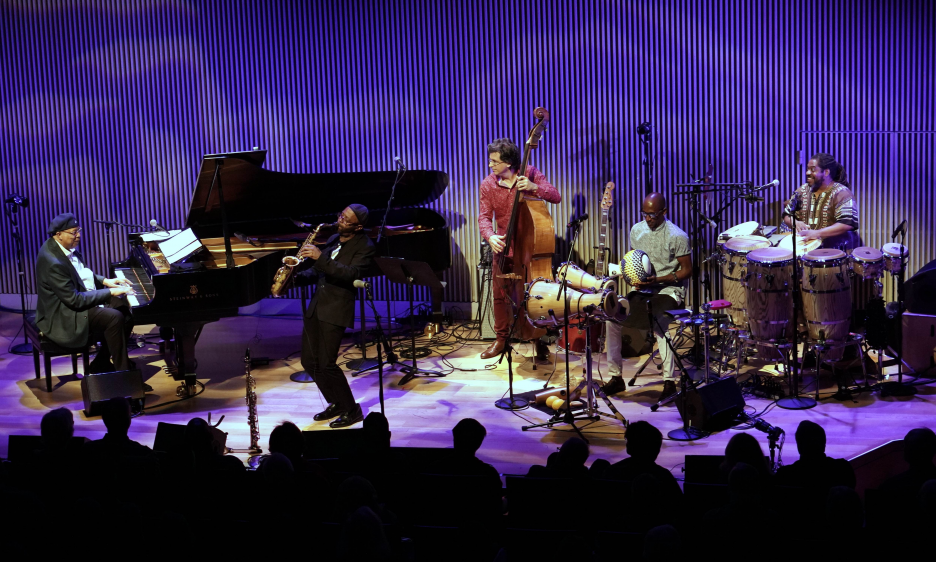 Seventy-six-year-old pianist Kenny Barron needs no introduction to avid jazz fans, having been a fixture on the scene for decades. He is known for his own work as well as his participation as co-founder of the Thelonious Monk tribute band Sphere which was active from 1982 to 1998 and had adopted the late pianist's middle name as its moniker. He currently teaches at Juilliard School of Music and formerly taught at Rutgers.

For "Kenny Barron and Friends," Barron selected two outstanding musicians to share the stage with him at Herbst Theater in San Francisco, California put on by SFJAZZ: Miles Okazaki and Benny Green. Port Townsend, Washington-native Okazaki is renowned for his opus Work Volumes 1—6 (The Complete Compositions of Thelonious Monk) (Self Produced, 2018) and so was a natural pick for the evening. Born in New York, Green was reared in Berkeley, California where he took up piano at the age of seven. His style is often compared to that of Oscar Peterson and Bud Powell, and he is a veteran of Betty Carter's band.

Taking the stage at the Herbst, Barron launched into an evocative and winding rendering of "Monk's Dream." Introducing "Reflections," Barron told the audience that "Monk wrote some beautiful ballads which are some of my favorites." Barron worked through a percussive version of "I Mean You" next before standing to introduce the bearded and bespectacled Okazaki. His first choice was a sensitive version of "Locomotion," followed by "Brilliant Colors" and "Nutty." He bent and swayed as he plucked. Next, Green shared his version of "Monk's Dream," a favorite of his father. "Tinkle Tinkle" and then "Ruby My Dear," named (Green told us) after Monk's first girlfriend, followed. Just before the intermission, it was time for an elaborate and lovely version of "Teo," named after the producer Teo Macero.

Taking the stage again, Barron and Okazaki played "Epistrophy," another number and then played riffs off of each other during "Round About Midnight." Barron was replaced by Green for "Hackensack." Barron then returned for a memorable trio version of "Mysterioso."