Binker & Moses: Journey To The Mountain Of Forever 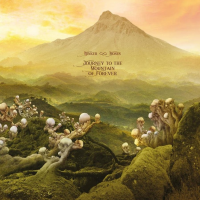 A double album with a title—Journey To The Mountain Of Forever—straight from the annals of Prog Rock (maybe with a short diversion via the Coltranes' spiritual jazz). A cover design that's a close relation to Led Zeppelin's Houses Of The Holy—a link made more explicit by an inner sleeve illustration that features a character in a Led Zeppelin tour t-shirt. Track titles that Yes would be proud of. It's—rather surprisingly—the excellent second album from the exciting young UK duo of Binker & Moses: saxophonist (and inner sleeve illustrator) Binker Golding and drummer Moses Boyd to be precise.

Binker & Moses burst onto the UK scene in 2016, releasing the high-energy Dem Ones (Gearbox Records) and winning awards. The debut was full of inventiveness, musical twists and turns, and some seriously hard-blowing and hard- hitting playing from both men. Journey To The Mountain Of Forever retains that inventiveness and ability to surprise, but also exhibits a more varied musical approach, enhanced by the presence on the second CD (or the second disc, given that this is also available on vinyl) of a few guest artists.

Record 1 is a duo set, opening with the slow-burn of "The Departure," a tune that displays Binker & Moses' more controlled and restrained side. "Intoxication From The Jahvmonishi Leaves" finds the pair getting down and funky, driving irresistibly forward with Boyd's muscular drumming setting a rock-solid foundation for Golding's flowing tenor lines. "Fete By The River" is a jaunty, Sonny Rollins-ish, toe-tapper. Three tracks in, and the duo have shown an enviable breadth of musical creativity.

The guest players, including legendary free-jazz saxophonist Evan Parker, ensure plenty of sonic variety on record 2. Binker and Moses remain at the centre of things, however, refusing to be intimidated by the presence of experienced improvisers like Parker and trumpeter Byron Wallen. The duo's creative breadth continues—"Gifts From The Vibrations Of Light" combines mystery and grace, thanks to the contributions of harpist Tori Handsley and tabla player Sarathy Korwar: Golding and Parker dart around each other on "The Voice Of Besbunu." A double album would be a step too far for most young players, but Journey To The Mountain Of Forever never fails to surprise and delight.

CD1: The Departure; Intoxication From The Jahvmonishi Leaves; Fete By The River; Trees On Fire; The Shaman’s Chant; Leaving The Now Behind. CD2: The Valley Of The Ultra Blacks; Gifts From The Vibrations Of Light; Mysteries And Revelations; Ritual Of The Root; The Voice Of Besbunu; Echoes From The Other Side Of The Mountain; Reverse Genesis; Entering The Infinite; At The Feet Of The Mountains Of Forever.