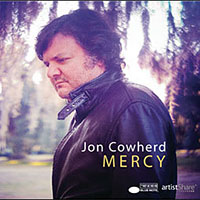 It's always difficult for an artist who has become so intimately associated with a group—especially if he or she has been a significant compositional contributor—to build a separate identity outside of that group. It might be one of the reasons that Pat Metheny Group keyboardist Lyle Mays—who not only contributed compositions of his own, but also co-wrote some of the group's most well-known and well-loved material—has released so few recordings under his own name.

Pianist/keyboardist Jon Cowherd is nowhere near as joined at the hip to Brian Blade & The Fellowship Band, heard most recently on the characteristically superb Landmarks (Blue Note, 2014); in addition to his tenure with a band first documented under the ubiquitous drummer's name on the 1998 debut, Fellowship (Blue Note), but increasingly represented by Blade, in subsequent years, as a group whose name tells the true story, Cowherd has appeared, on record and/or on the road, with everyone from Cassandra Wilson, Lizz Wright and Kellylee Evans to Rosanne Cash and Iggy Pop. Still, the Fellowship Band—where Cowherd regularly contributes compositions and who, since the group's second record, Perceptual (Blue Note, 2000), has co-produced every album alongside Blade—is the group that has somehow come to truly represent the pianist's true musical personality.

Or so it seemed. Mercy, released digitally in late 2013 by ArtishShare and only now seeing hard CD issue as a collaborative effort with Blue Note, supports the idea that the Fellowship Band may be Cowherd's true home but, at the same time, it also suggests that there's even more to this talented composer/performer than his work with Fellowship has already amply demonstrated.

It's true that a good proportion of the eleven Cowherd compositions on Mercy could easily fit within Fellowship's combination of folkloric aesthetic, unfettered collaborative freedom and adherence to melody in whatever guise it may be found. Still, he has rarely been afforded this much space to stretch on record, though anyone who has seen the band in the past few years—in locations as far apart as Oslo, Norway and Ottawa, Canada—knows, as it has slowly whittled down from its original septet to a leaner quintet, that Cowherd has assumed an even great role in performance, both as a soloist and as a harmonic colorist whose voice is as definitive of the group's overall complexion as the other members of a band who have, over the past 17 years, truly become brothers: along with Blade, bassist Chris Thomas, saxophonist Melvin Butler and saxophonist/bass clarinetist Myron Walden.

Still, while there's little on Mercy that couldn't easily be refitted for Fellowship, Cowherd's decision to recruit bassist John Patitucci and, in particular, guitarist Bill Frisell to join Blade in this quartet date recorded nearly two years ago in December, 2012 renders it a significantly different experience, despite it now being even clearer why Cowherd and Blade have evolved into such a strong writing and production team. The three-part "Mercy Suite"—four, if you include the appropriately titled and still connected "Postlude" that follows—creates a 25-minute centerpiece to an album filled with writing as episodic and cinematic as anything Cowherd has written for Fellowship, but remains distinguished for his greater overall dominance.

It's also significant in providing a context where Frisell delivers, if not his finest work in recent years—that would be a difficult challenge when rendered against his own work in so many different contexts, most recently debuting his impressive Guitar in the Space Age! project at the TD Ottawa Jazz Festival, along with a fantastic revision of his music for Buster Keaton's 1925 silent film Go West the following evening—then certainly some of the most atypical work in a long time.

Frisell's gritty and angular work on the fiery "Postlude," for example, is the closest he's come to attaining the climactic power and structural beauty of one of his most memorable solos ever on Don Byron's "Next Love," from the clarinetist's Tuskegee Experiments (Elektra/Nonesuch, 1992), or his similarly edgy work on Madonna's "Live to Tell," from the guitarist's own Have a Little Faith (Elektra/Nonesuch) the following year. The context is, of course, completely different; "Next Love" positively oozes New York attitude, while the similarly propulsive and equally incendiary but somehow less jagged "Postlude" speaks, in some fashion, to the southern roots coupled with Midwestern influence of Cowherd's native Kentucky.

Of course, an artist's music doesn't necessarily have to reference where he or she comes from—in particular from a pianist born in Kentucky, schooled in New Orleans and who now calls New York City home. No, not all of Mercy references those early roots—the album-opening "The Columns" a cornucopian blend of his many travels—yet there does remain something inherently folkloric about songs like the far gentler "Baltica," where Frisell's rich-toned yet twangy guitar entwines perfectly with Cowherd's confident but ever-sensitive lyricism and similarly collaborative nature. A feature for Patitucci—who has become an increasingly important player of his generation largely through his collaboration (alongside Blade) in Wayne Shorter's endlessly searching quartet of the past 13 years—the empathic fashion in which Cowherd and Frisell support Patitucci is almost as impressive in its spare elegance as the bassist's own performance. And when Cowherd takes the lead soon after, Blade—as ever, a fountain of both responsive and suggestive ideas ranging from explosive snare and tom punctuations to pointillistic cymbal work—helps propel him forward for a solo that's as perfectly constructed as the swelling guitar work that lies beneath it.

There are also more through-composed pieces like "Surrender's Song," a rubato tone poem where Frisell manages to double Cowherd's bittersweet melody while, at the same time, creating the perfect accompaniment to the pianist's brief solo. And while acoustic piano is his main instrument here, just as on the Fellowship Band's Landmarks, Cowherd again turns to mellotron for a curious duo with Frisell, "Seconds," combining wavering flutes, swirling electronics, dissonant harmonics, gentle power chords and other quirky guitarisms that act as a palette-cleanser for Mercy's closing two tracks: the lovely waltz-time "Lowertown," where Cowherd reconciles his own roots with Lyle Mays' more decidedly Midwestern Wyoming upbringing; and the atmospheric "Four Rivers," where the pianist seems as connected at the hip with Frisell as Mays was, for most of his career, with the guitarist's relative contemporary, Pat Metheny.

While Cowherd's birth date isn't listed anywhere, it's a safe bet, since he was schooled in New Orleans where Blade was also educated (at the city's Loloya University), that they're both approximately the same age, placing the pianist in his early-to-mid-forties. That's a long wait to finally put out an album under his name but, with the Fellowship Band such a strong representation of Cowherd's identity—despite the pianist's many extracurricular activities—neither is it a particular surprise. It certainly seems a certainty, at this juncture, that the Fellowship Band will continue—the bond between these five men being so strong, by now, that it's hard to imagine anything breaking it up. But given that band's relatively diminutive output (just four albums in 16 years), now that Cowherd has made that all-important first leap with Mercy—an album inexorably tied to Fellowship but, at the same time, a departure in its emphasis and so strongly predicated on the remarkable chemistry shared by these four players who are connected in so many ways—it would be a real shame if this were to be a one-off event.

And the chemistry shared amongst these four players is no coincidence; instead, it's the sum total of working together in various combinations, just never in this particular one, with Blade representing a connective thread; in addition to his work with Cowherd in the Fellowship Band and his relationship with Patitucci in Shorter's quartet, Blade also toured with Frisell and the perennially undervalued Sam Yahel in 2004, in a trio that never released a commercial recording but is documented in the fourth installment of the guitarist's ongoing Live Download Series.

With music this well-conceived and a band so telepathically connected, it may have taken Cowherd a long time to release an album under his own name, but with Mercy as the result, it's been well worth the wait; hopefully there won't be such a long one for the follow-up.