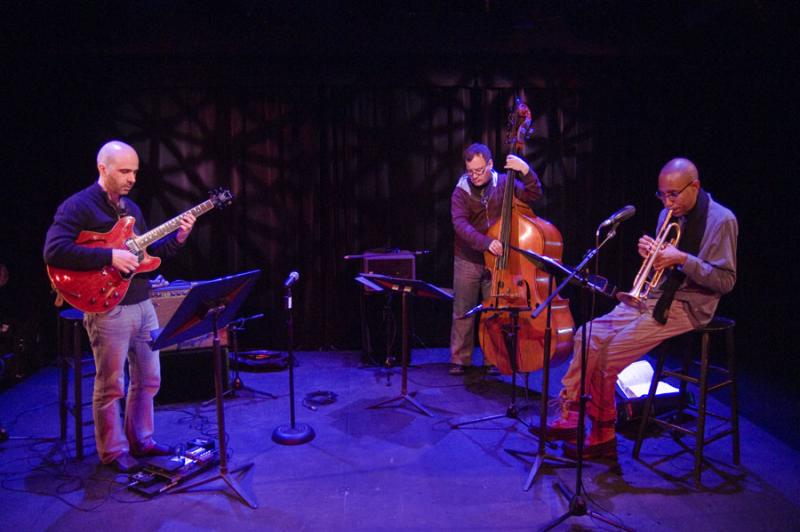 For his first concert of 2012, bassist John Geggie reaffirmed the astute ability to bring together musicians in unheard-of configurations that's made his longstanding Geggie Concert Series an Ottawa institution. Despite living in a city that would have a hard time getting classified as a jazz mecca, Geggie's leadership of the Ottawa International Jazz Festival's late night jam sessions, touring with groups such as Chelsea Bridge and artists such as pianist D.D. Jackson, and his current role as an educator at Suny Potsdam in upstate New York—not to mention possessing the networking skills to take advantage of every opportunity that comes his way—have helped the bassist put the city on the jazz map through his world-class collaborations. Past work with pianists Marilyn Crispell, Frank Kimbrough and Edward Simon, trumpeter Cuong Vu and guitarists Vic Juris and Ben Monder have all been successful examples of how music without a safety net most certainly works better on some occasions than it does on others, but that the journey is often as good (or better) than the destination.

There's no denying some of Geggie's lineups gel better than others, that the collective chemistry of musicians who have never played together in a specific configuration (if they've ever played with each other in any context), and with minimal rehearsal time, sometimes happens and sometimes doesn't. But few of the Ottawa jazz fans who regularly attend his series in the roughly 175-seat, club-like Fourth Stage at the city's National Arts Centre would ever suggest that time with Geggie and friends is anything but well spent. Still, every now and then, the bassist's choices are particularly inspired, and if Colorado-based trumpeter Ron Miles is a better-known entity than Torontonian guitarist David Occhipinti, individual cachet mattered little in a trio that created some of the loveliest music this city has heard in some time.

With his own small but impressive discography including the particularly fine Woman's Day (Grammavision, 1997) and, more recently, Stone / Blossom (Sterling Circle, 2007), Miles is perhaps best-known for his work with guitarist Bill Frisell, on albums including Blues Dream (Nonesuch, 2001) and History, Mystery (Nonesuch, 2007). A melodist at heart, that doesn't necessarily mean his concepts are straightforward or predictable, but with an ear open to everything around him, it does mean that he's ready, at the drop of a hat, to shift gears and turn more oblique, as he did on "Paul Motian in White Fields," a new Geggie composition demonstrating that the bassist may not be particularly prolific, but when he does put pen to paper, the results are invariably memorable. In the context of a trio where, as Occhipinti pulled back from chordal support to solo, the collective sound became more rarefied, Miles also demonstrated a rare ability to, with the sparest and oftentimes quietest of underscoring lines, played with a warm and appealing tone, make his instrument work as a compelling accompaniment instrument.

Occhipinti's longstanding quartet with Toronto-based saxophonist Mike Murley and drum legend Terry Clarke hasn't released an album since 2007's Forty Revolutions (Self Produced), but he's been busy in other areas, in particular composition, and is currently preparing for a new recording of chamber works. But his connection with Clarke has even great significance than simply playing with a drummer who has brought an elegant yet swinging touch to recordings by everyone from John Handy to Moe Koffman, and that's just the reed players. With Clarke the drummer on Jim Hall's classic Live! (Verve, 1975), there's a direct connection between Occhipinti and a guitarist who's more than a significant touchstone, having studied with him nearly 20 years ago. Here, Occhpinti's tone was soft, warm and round, but with an undercurrent that, like his mentor, included the actual acoustic sound of his hollow-body Ibanez electric, fed through a stereo rig of two Fender Deluxe amplifiers and a small pedal board of effects. The guitarist, after the show, admitted that the volume of the trio was so quiet that he actually found himself continuing to turn down throughout the show.

In a set that combined two originals each from Geggie, Occhipinti and Miles, three standards and a pop ballad chestnut from The Beatles, the focus was on interaction and interpretation. Occhipinti's arrangement of "Good Morning Heartache"—first made famous by singer Billie Holiday on her classic Lady Sings the Blues (Verve, 1956)—included a more modernistic bridging section but, when it came to the familiar melody, the trio's reverence for the original was clear, even as Miles' lines were ever-so-slightly skewed, Occhinti's chordal work of the language but somehow extended, and Geggie's support rock-solid yet responsive. 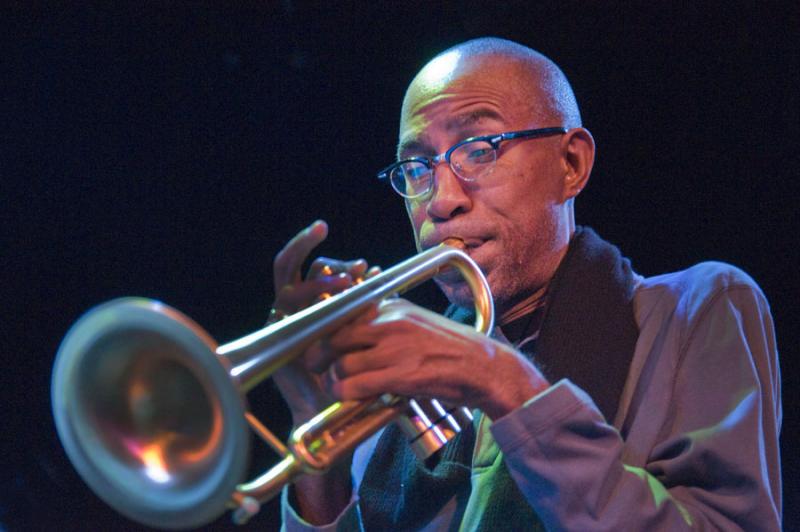 It was a relaxed setting where all three had plenty to say but nothing to prove; more about the collective sound than any individual contributions, though everyone had plenty of opportunity to shine: Miles, as ever, with his burnished tone and curious yet singable lines; and Occhipinti the definition of restraint, so that when he did occasionally cut loose, it was all the more impressive.

The past few years have been particularly significant for Geggie, beyond (or, more likely, because of) his Geggie Concert Series. With the near-concurrent release of his overdue first recordings as a leader—Geggie Project (Ambiances Magnetique, 2010) and Across the Sky (Plunge, 2010), the bassist has made some significant leaps, soloing with greater dexterity and confidence than ever before, and an arco tone that's part and parcel of his work in the classical field.

Delivering two sets that were so eminently engaging that they seemed to pass by in a moment, the temperature may have been particularly cold outside on this early January evening in the extreme weather capital of the world, but inside the Fourth Stage there was plenty of comforting warmth that didn't make any sacrifices when it came to adventurous experimentation.