BY DUNCAN HEINING
October 29, 2012
Sign in to view read count 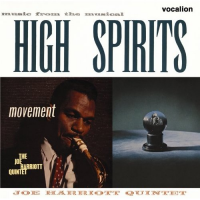 The acquisition, ownership and handling of a back catalogue of classic British jazz from the sixties by first Polygram and then Universal Supersession is a story of meanness and incompetence. It meant that key recordings by the likes of saxophonists Joe Harriott and John Surman, pianists Mike Westbrook and Stan Tracey, the Don Rendell-Ian Carr Quintet and quite a few others have either never been issued on CD or been patchily available at best. Some of this material is now entering or about to enter the public domain. On the one hand, this means that fans may at last actually get to hear these sides. On the other, it also means that these are likely to appear in poorly presented packages, often using vinyl copies rather than original masters in the reissue.

Two British companies stand out from the rest in all respects-Beat Goes On and Dutton-Vocalion. Over the last few years, both labels have ensured the availability of records that tell the rich and varied story of British jazz in the 1960s. Ideally, one would like to see expensive, Mosaic-like box sets of Westbrook's Deram albums or Joe Harriott's Lansdowne releases, complete with original sleeve notes and artwork, full and annotated recording details and more. The market just wouldn't stand it, of course. In a way, that makes the efforts of Dutton-Vocalion and BGO all the more important.

Harriott's career is beautifully recalled in Alan Robertson's biography, Fire In His Soul (Northway 2012). The Jamaican alto saxophonist recorded and released ten LPs for Denis Preston's Lansdowne Series between 1960-69. Of these, three saw him experiment with an abstract approach to jazz that paralleled but was quite different from saxophonist Ornette Coleman's work in the USA. Free Form (1960) was reissued last year as part of the four-CD The Joe Harriott Story (Properbox, 2011). Abstract (1961), his best album, came out on Universal in 1999 but has long since been deleted. Movement (1963) is the third and last in that sequence. As to the reasons why Harriott abandoned his experiments, these are well-documented in Robertson's biography and elsewhere on this site.

Movement is perhaps the best representation of a typical Joe Harriott Quintet gig of the period, combining as it does straight-ahead tracks with his free-form work. British pianist Brian Dee has remarked, in my recently released Trad Dads, Dirty Boppers and Free Fusioneers (Equinox, 2012), that Harriott's way of mixing sets in this way did not help his cause, leaving audiences puzzled and unsure about how they should respond. Indeed, there are intimations of this when hearing this record. And yet, that does not ultimately detract from it. In fact, it allows conclusions to be drawn and, more than that, the opportunity to see how the experimental stuff is to some degree derived from and related to the more bop-oriented music.

So, it opens with the easy swing of "Morning Blue" with Harriott's alto warm, sunny and optimistic and Shake Keane's flugelhorn light as air. "Beams" follows, echoing Harriott's two previous records in several ways. Firstly, it is immediately apparent that this is very much a group music. The horns, in particular, seem almost mutually dependent, with Harriott and Keane interlocking and playing off each other. The music is held in place by Coleridge Goode's walking bass, with piano and even drums having greater licence within the rhythm section. Secondly, it's clear that this music is not really modal at all; rather, it is developed from melodic fragments and motifs.

"Count Twelve" is pure bebop rooted in the blues with some simply lovely flugelhorn from Keane and delightful piano from Pat Smythe. The relationship between Goode and drummer andBobby Orr here is almost symbiotic, while Harriott's own solo is wild and free-flowing.

Michael Garrick's quirky "Face in the Crowd" follows. Originally, it accompanied Jeremy Robson's poem of the same name on Poetry & Jazz-Record Two (Dutton-Vocalion, 1967) and on which Harriott played as part of Garrick's quintet. It's a fine, angular performance that sits well with Harriott's own more abstract writing. "Revival" is one of the saxophonist's most Caribbean-inflected tunes and is perhaps the record's highlight, whilst Garrick's "Blues on Blues" reveals perfectly how very, very good this group really was.

The album concludes with three tracks: "Spaces," which was arguably the most abstract piece Harriott ever recorded; the fine, if mainstream bop "Spiritual Blues," with some great bowed bass from Goode and excellent drums from Bobby Orr; and the album's title track. "Movement" itself has an intensity not found in all of Harriott's free form work. It's a stunning group tour de force, again building from comparatively simple melodic materials into something that is dark, brooding and even slightly unsettling. Of the two records in this package, Movement is the one that is absolutely essential. Were it not for these earlier achievements, High Spirits might come more highly recommended. It is of a much lighter weight but it does have its share of pleasures. It is doubtful that Harriott could ever have made a bad record and, by most other people's standards, this would be top flight.

The shortcoming of High Spirits lies in the sense that these show tunes, from the musical based on Noel Coward's play Blithe Spirit, are really fairly average West End/Broadway fare. "You'd Better Love Me" is a case in point. It really doesn't deserve Pat Smythe's elegantly poised solo. Smythe did the arrangements here and he made a more than adequate fist of the task. In fact, Smythe has the album's finest moment in his lovely, limpid performance on "Forever and a Day." The band's playing, however, is lively and authoritative throughout, and Shake Keane is on wonderful form and particularly so on "If I Gave You." There's also a certain poignancy to the way Harriott plays on each of these eight tracks, almost as if somehow he can compensate for the lack of depth to the original tunes. In any other context, his solos on "I Know Your Heart" and "Was She Prettier Than I?" would count as prime Harriott. Perhaps, this a little ungenerous. This is a strong pairing of one very good record with another that is more than acceptable. Many people may want this release for Movement alone, in which case High Spirits is a bonus.

Tracks: Home Sweet Heaven; If I Gave You; Go Into Your Trance; You'd Better Love Me; I Know Your Heart; Was She Prettier Than I?; Forever and a Day; Something Tells Me.

Tracks: Movement>: Morning Blue; Beams; Count Twelve; Face in the Crowd; Revival; Blues on Blues; Spaces; Spiritual Blues; Movement. High Spirits: Home Sweet Heaven; If I Gave You; Go Into Your Trance; You’d Better Love Me; I Know Your Heart; Was She Prettier Than I?; Forever and a Day; Something Tells Me.