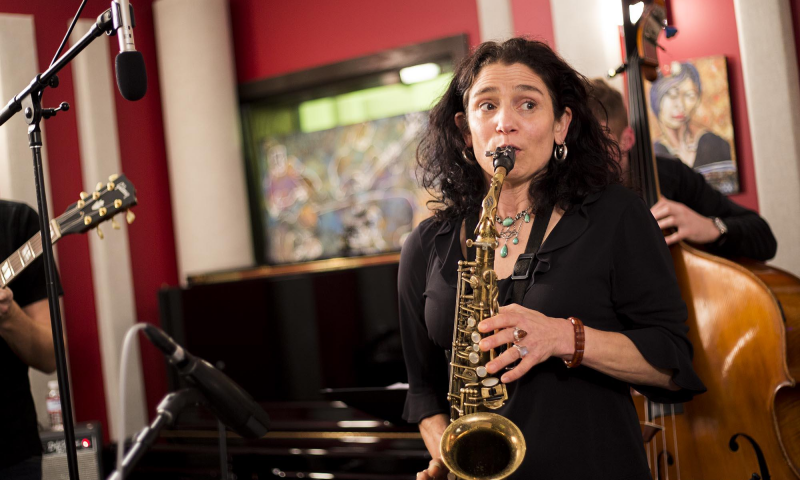 “I’ve found in Seattle, more so than any other place, the ability to have spontaneous improvisation that can sound like a song, where people are improvising, but there’s a thought about an art, and a narrative within the music." —Jessica Lurie

Jazz music, in all its forms, spread throughout world culture, is deeply embedded in the American experience. It is a culture based phenomena uniquely reflecting that experience in such a personal and expressive way as to embrace the myriad of crosscurrents that express new interpretations of the form.

It is deep as the physicality of its beings, from the heart that pumps life into its veins, to the soul and conscious understanding of the constant, forever assimilation of new streams of world civilization. We are born into familiar backgrounds rooted in the traditions of Africa, Europe, Asia, from social communal variances within our own massive continent. This primordial American concept continues to grow, to spread, to diversify in terms of rhythmic, harmonic and melodic context.

The music of Jessica Lurie therefore is not hanging on the periphery of what we call jazz music, as some may believe, or perceive. This art form is uniquely, forever expressing the spirit of humanity, in such a way as to constantly rewrite the cultural DNA of the American experience, and that of other peoples in sisterhood, and brotherhood throughout the world. In this sense, Lurie's creative output, rooted in the eclectic jazz and improvised music community in Seattle, and propagated on the New York scene can be seen as a 21st century expression of her own familiar roots. Its inspiration is in a far reaching way, tied to the deep taproot that is the blues based music we have come to refer to as jazz.

Lurie grew up around the music of her parents, playing classical flute at an early age, and ultimately would become influenced musically by her father's Jewish heritage, as well as other varying streams of influence present in the eclectic music scene in Seattle. Though Seattle is known commonly for rock, she would inevitably be drawn in by the jazz scene there that had been making its mark on this indigenous American art form from its beginnings.

"I'm relentlessly eclectic! I grew up playing classical music. I started getting into jazz in high school, but I was also playing baroque music. I think playing saxophone really opened up my ears to a lot more music, in terms of what I was pursuing. Then at Wesleyan University in Connecticut, I was in the ethnomusicology department, studying South Indian music with T Vishwanathan. I studied composition with Bill Barron, and with Hafez Modir for saxophone and theory. As an undergrad, you can sit in on all these graduate classes. I audited classes by Anthony Braxton though he wasn't a direct mentor. I Also did a ton of West African stuff. I really got into Ornette Coleman, and saxophonists like Cannonball," she recalls.

Saxophone was not her original instrument of choice, first excelling on the flute and accordion." I started playing saxophone in college because it was louder. Arne Livingston from the Daylights, we went to high school together," she says, alluding to her friend that she would eventually partner with in the power jazz/jam band trio, Living Daylights. While the alto became her instrument of choice as her career advanced forward, it certainly wasn't just a foray into the sounds of Ornette Coleman, or for that matter, Cannonball Adderly. Inevitably she began to explore tenor players of note.

"I also transcribed Sonny Rollins, and John Coltrane. These were the days when we had cassettes, so you could adjust the speed, and I mistakenly learned the "Giant Steps" solo on alto, but a half step off! I listened to just about everyone, and the teachers that we had at Wesleyan were really great. It exposed me to a lot of different kinds of music. The music I write, and the music I love to listen to is folk music in some kind of way. What I love about jazz is when it harkens back to the blues, not that it's all blues, but that it has this element of folk music. So stuff that I write I think it's almost like fucked up folk tunes. I don't know what to call it, they don't have a record bin for it," she says.

Her time in Seattle in the '90s provided plenty of inspiration and diverse musical activity. Partnered with saxophonist Amy Denio, The Tiptons Saxophone Quartet took off into uncharted territory, inspired by the life and music of Billy Tipton. Tipton had spent his entire adult life living and performing as a male, but was assigned female at birth. The band's reverence for Tipton's work was a source of strength for an all female saxophone band, that even in the alleged progressive world of the 1990's was a constant challenge due to gender bias. The overwhelming dominance of male instrumentalists in jazz remains a major hurdle for the music to overcome, to truly be the indigenous expressive art form it claims to be. "If you go to a festival and see 100 instrumentalists, 96 of them are men. And I live in New York, where there are so many bad ass female players," she states emphatically.

Denio became a major influence on Lurie, in terms of exposing her to jazz music that was more out on the edge, and engaged in the avante-garde. At the same time, her time in Seattle reunited her with high school friend Arne Livingston, who had been studying in Boston.

"When I came back to Seattle, Arne moved back here, he had been in Boston doing freestyle, and Dale Fanning was here and this was '95 or so-he had been doing so much Afro Cuban stuff. That played into weird, angular, funk groove stuff," recalls Lurie.

"Playing with the Tiptons, Amy Denio really got me listening to a lot of outside music, avant-garde music," says Lurie. This would lead to the formation of Living Daylights with Livingston and Fanning, a powerful trio consisting of electric bass, drums, and the now strong voice Lurie had developed on saxophone.

Lurie's music undeniably takes on the many strong musical roots in her life, from her parents love of classical music and musicals, to the open minded jazz and improvisational music scene in Seattle. Though her early experiences in music were largely experienced on flute, her eyes were opened to the multiplicity of sounds she could express on the saxophone. She discovered the wide range of sounds, textures and colors available on the instrument, like so many in the jazz tradition had before her.

"I was listening to more and more jazz, early songs, early blues, and learning standards. My parents both loved musicals, Cole Porter, so my dad would play piano and we would sing these musical songs. They became part of the jazz canon. I was playing really well on flute, but really working hard on saxophone, and it being my main tool for learning that repertoire. I felt like it was a whole lot of things at once. Coming from classical, I knew I could learn the instrument, and I was feeling less inhibited to improvising on the saxophone. Even though I could improvise better on flute, I would find different sounds, and try to find extended sounds. I think I took a semi conventional approach, and then began to get into more experimental stuff. I really got into Duke Ellington, Charles Mingus, I learned the language," says Lurie, thinking back to her earliest experimentations with the saxophone, and with the standard jazz repertoire.

Lurie considers herself a bi-coastal musician, spending time both at her residence in Brooklyn, and at home in Seattle. As a native New Yorker, and now a forty year resident of the Seattle area, it is easy for me to see and hear the influences of these two very vibrant, but very different musical cities in her music. When in New York, one feels the history and tradition that the city embodies. Since the 1920's, New York City has been the true cradle of jazz expressionism. Seattle, from its roots on Jackson St. during prohibition, to it's vibrant and eclectic jazz and improvised music scene of today, has had a collective open mind to extended forms of jazz, and progressive social awareness.

"I've found in Seattle, more so than any other place, the ability to have spontaneous improvisation that can sound like a song, where people are improvising, but there's a thought about an art, and a narrative within the music. So coming to New York playing free, we could put our egos somewhere else, and just listen, and have it take shape. There are so many amazing players there," says Lurie about her bi-coastal tendencies. "I like groove music too, or when it can go in and out of groove. Totally free, and then go back into that pocket. I guess what I bring is my love for all these different kinds of music, and not being afraid to put them into my tunes. I'm not a pop musician, but I can play pop, I don't have that standard bebop sound, but I love these elements."

Lurie is currently riding the wave of her new release, Long Haul (Chant Records, 2017), a title expressing her collective career of 30 years that has moved forward fearlessly and creatively. In some ways it alludes in terms of texture and sonic resonance to her ensemble record, Shop of Wild Dreams (Zipa!Music, 2009), but there is notable forward progress in compositional form and diversity, and in her arrangements.

"What's different on this record is I'm not singing. My last few records, I've been singing half the tunes. Four of the tunes were older works that hadn't been recorded yet, that I reworked. I think it's an evolution of my harmonic approach. The newer tunes were written in the last year, year and a half. I think I'm better at arranging, you're always learning, every single time," says Lurie with a refreshing sense of pride and humility.

There is a notable personnel change, being in the person of brilliant pianist Brian Marsella. There is a very open and cerebral connection between his playing and that of Lurie, through a myriad of rhythmic and stylistic changes throughout the recording.

"He's amazing. He's from New York, I play with him in Zion80, which is this African Jewish band where I play baritone. We play the music of Fela Anikulapo-Kuti. He's just a genius, he's one of those classical virtuosos that had a major meltdown for real, and came back as a jazz virtuoso," states Lurie about the mercurial pianist.