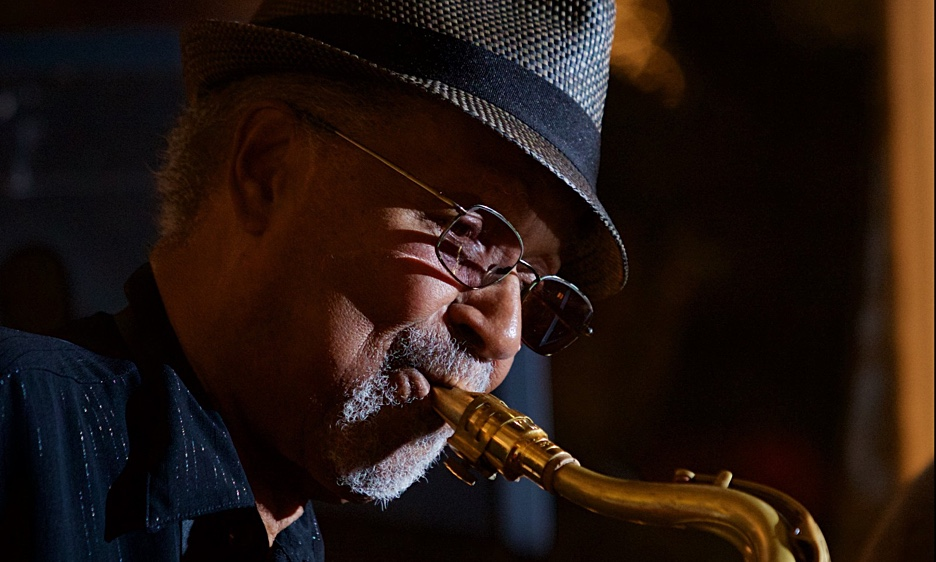 By KARL ACKERMANN
December 3, 2019
Sign in to view read count

The arts [are] what man has to depend on to remain civil. —Thales Thomas Pearson

The oral history traditions of West African griots led the preservation and interpretation of music that would become the fundamentals of jazz. In previous Under the Radar columns we looked at institutions that further the cause of safeguarding the genre; university-level academic programs and jazz museums whose hands-on experiences, community outreach, teaching and sharing of history, are helping to keep jazz relevant. In the decentralized, smaller, and culturally diverse world of jazz societies, the dissemination of jazz history is often managed by small organizations on shoe-string budgets. As of 2019 there are approximately two-hundred documented jazz societies in thirty-eight states including Alaska and Hawaii, in Washington, DC and in the territories of Puerto Rico, Guam, American Samoa, the U.S. Virgin Islands, and the Northern Mariana Islands. Globally, there are similar organizations from Australia to Zambia.

Jazz societies and foundations vary as much in their overall objectives as they do in the scope of their operations. It's neither unusual to find a group managed from a kitchen table or one with an office at a university. Some have regional interests at stake: The Seacoast Jazz Society (Durham, NH) has been supporting jazz in New England for three decades; The Charlottesville Jazz Society (Virginia) provide connections between fans and the local jazz community. For some organizations, the name tells a good part of the story. The Dixieland Jazz Society of the Lowcountry (Hilton Head, SC), West Coast Ragtime Society (Sacramento, CA), and The Swingtime Jazz Society (Troy, NY), have their primary focus on promoting a sub-genre of jazz. Others such as The Bix Beiderbecke Memorial Society (Davenport, IA), and the Duke Ellington Society of Southern California (Culver City, CA) are principally interested the legacy of their namesakes. Some, like The Skipp Pearson Jazz Legacy Foundation incorporate the broader goal of honoring and celebrating the historic, educational and creative consequences of jazz.

John Birks Gillespie clarified it: he wasn't coming home again. The native son of rural Cheraw, South Carolina had been informally appointed a US State Department Jazz Ambassador in 1956. He traveled to Europe, the Middle East, and Asia with the U.S. government's hope that he would represent an impartial and idyllic notion of his country. When the South Carolina House of Representatives confirmed the title of Ambassador of Jazz for South Carolina on the man who became Dizzy Gillespie, he accepted the title but refused the offer to move back to a bulwark of racial intolerance. Following Gillespie's death in 1993 the mantle of Ambassador of Jazz for South Carolina was passed on to a musician whose renown was far more concentrated than Gillepsie's: saxophonist Thales Thomas "Skipp" Pearson.

Skipp Pearson, a native of Orangeburg, South Carolina was born into a family whose affinity for music spanned generations. Pearson was playing in area bands and appearing on local television by the time he was thirteen. Following four years in the United States Air Force, he returned to Orangeburg and earned a Bachelor of Arts degree in music from Claflin College in 1973. Pearson's dedication to community greatly affected his lack of wider recognition. He worked as a band director and music teacher for twenty-five years in sparsely populated agricultural South Carolina counties of Bamberg and Clarendon while continuing to perform. In his final interview—with Columbia's Free Times—Pearson stated: "The arts [are] what man has to depend on to remain civil." Pearson formed The Jazz Resource Center, an enrichment program to help students and provide a studio and meeting space for jazz musicians. Among the honors he received was South Carolina's highest civilian honor, the Order of the Palmetto. Pearson was inducted into the South Carolina State University Jazz Band Hall of Fame in 1998. The saxophonist was a regular performer at Columbia's Le Cafe Jazz, the Hunter-Gatherer, and played that city's popular club, Greenstreets. Despite recording little, Pearson deep, bluesy tenor sax was active in performing nationally and internationally.

I spoke to several representatives from jazz societies, highly engaged in communities large and small. We begin with Shirley Martin, the Executive Director of The Skipp Pearson Jazz Legacy Foundation and formerly Pearson's business manager. Not a household name of national scope, Pearson, a native of Orangeburg, South Carolina passed away in 2017 and remains a legend in his home state of South Carolina. Known as "Pops," his fifty-year career included work with Wynton Marsalis and Miles Davis and mainstream artists such as Patti Labelle, Otis Redding, and Sam Cooke. While in the Air Force, Pearson served in Ipswich, England. Originally a student of percussion, he had the occasion to sit in as drummer with the as-yet discovered John Lennon and Paul McCartney, playing a gig in Liverpool. Pearson played at President Barack Obama's 2009 inaugural ball and had performed earlier for Presidents Johnson, Carter, and Clinton, and twelve governors.

The official charter of the Pearson Jazz Foundation states its mission is preserving and promoting ..."the artform of live Jazz Music through the presentation of a myriad of educational programs and projects for the benefit of the public. The primary mission of the Foundation is to discover, develop, train and enhance the lives of all persons by providing on-going projects and programs that preserve the history and technical development of Jazz Music. Additionally, the Foundation seeks to advocate and to foster the highest level of training excellence and technical standards available to young performers desiring a career in the music industry. Finally, the Foundation seeks to support career track pre-professional musical artists for the benefit of enriching the 'quality of life' in all communities."

I asked Ms. Martin for an example of how the Pearson Jazz Foundation is preserving jazz. She explained: "Annually the Foundation provides a minimum of twenty-five free admission live music performances to children and teens to continue the late Ambassador Skipp Pearson mission to foster a greater appreciation for the art of jazz music." The Foundation has been operating for over twelve years. Informally launched in the summer of 2005, its official founding date by the South Carolina Secretary of State is March 19, 2007. The Foundation website lists an all-volunteer staff of ten, operating out of Columbia, SC. Ms. Martin describes a typical day at the Foundation: "[It] is organized months ahead. We have planning seasons built around our three signature events: National Jazz Appreciation Month, International Jazz Day and Jazz on the Road. A typical day at the Foundation around these three events which annually consume April, October and January is the pre-production process of securing enough funds to cover the costs of each project and program. Presently we are engaged in securing enough funds to present all programming for A Day of Jazz in New York City." She adds that "Our demographics cover the globe and cross all generational and ethnic lines."

As early as the 1960s, Miles Davis had told CBS Records' Clive Davis, "Jazz is dead." He was referring to the jazz "tag," not the music, but others have prematurely written off the genre through the years. I asked Ms. Martin how she would assess the health of jazz in 2019. In her opinion, "Mr. Davis was correct, in the 21st century the art of Jazz music is struggling, seemingly consumed by new genres that more often than not exhibit contempt for the roots of jazz and of those who are its unsung pioneers. But then Ambassador Pearson was a jazz purist...the belief that original music forms of early 20th century jazz did not require any extraneous elements to survive the test of time." In addition, she does not feel that the survival of jazz depends on integrating modern elements such as hip hop and electronica: "In a word...no. Jazz music, like every other performing and visual art has its commercial side. There will always be musicians that look for the pure, unaltered roots of Jazz music and once finding those roots for themselves will bring forward their form of integration remaining true to the art form."

The Foundation has several initiatives to acquaint future generations with a genre that no longer receives broad exposure. Their new Legacy Project will attempt to record and archive the music and personal history of twenty-five jazz artists each year for the next five years and may focus on "unsung pioneers" of the art of twentieth-century jazz music. Their goal is to work with the Smithsonian and other entities to accomplish this endeavor. The Foundation offers a "public arts music education" program which their employees and members are free to attend. "The Southeast region of the United States has not yet achieved an understanding that the performing arts should be an integral part of daily life. The Pearson Jazz Foundation reaches out to the local community, through providing unique program content that attempts to share the full history of jazz music." As an example, Ms. Martin cites programming being organized by the Foundation in support of the United Nation's International Jazz Day USA 2020 will focus on Women in Jazz.

The Foundation's 2019 celebration of International Jazz Day was held in a number of Washington, D.C. locations including George Washington University. There current plans for 2020 International Jazz Day include Pearson's home state and New York City venues. The Skipp Pearson Jazz Foundation also facilitates a Jazz on the Road series "designed to enhance... members listening experiences." The series allows members to travel with the Skipp Pearson Ensemble as they perform across the country and around the world. The most significant idea that the Foundation wants to express, according to Ms. Martin, is: ..."the art of Jazz music matters in that in its development you will find the history of America and the culture of a people." More information is available at skpfoundation.org. Part II of Jazz Societies will take a broader look at active organizations from coast to coast.

Vintage Years with Skipp Pearson and Friends, Part I 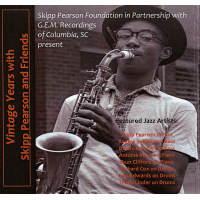 Vintage Years with Skipp Pearson and Friends, Part I is Skipp Pearson's collection of standards played in a straight-ahead manner but the leader's inventiveness is continually on display. Pearson is surrounded by local South Carolina musicians, the line-up changing throughout the program.

Caravan; Little Sunflower; Poinciana; My Funny Valentine; Green Dolphin Street; In the Mood; What a Wonderful World; Misty; Take the A Train; When the Saints Go Marching In.