By MARK SULLIVAN
December 3, 2019
Sign in to view read count 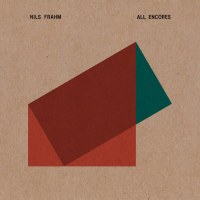 German composer and keyboardist Nils Frahm celebrated the completion of his Berlin studio with the release of All Melody (Erased Tapes, 2018), an expansive program which included acoustic piano, harmonium, and classic analog synthesizers, plus a cast of guest musicians. But Frahm began the recording process with a great deal of material that did not make the final cut; only 12 out of 60 sketches were used. When he launched a world tour, much of this music wound up being used as concert encores, which he has documented with the EPs Encores 1-3 (Erased Tapes, 2018-2019). All Encores compiles all three into a single collection.

The first group of pieces concentrates on acoustic music utilizing piano and harmonium. "The Roughest Trade" opens the set with gentle, lyrical piano, but "Ringing" includes trumpet sounds (either real or sampled). The melodic "The Dane" apparently became a favorite during the tour—it could almost be a Keith Jarrett out-take. As the title suggests, "Harmonium In The Well" focuses on a harmonium with heavy reverb. It is the longest track by far, and creates a slow-moving atmospheric setting.

The second collection explores a more ambient sound world. "Sweet Little Lie" opens with piano with heavy reverb, rippling arpeggios establishing the setting. "Spells," the longest track, creates a denser atmosphere with sequenced rhythms, a foundational bass line, and sampled vocal lines. The third instalment focuses on the percussive and electronic aspects of his work. After the brief vocal samples and percussion of "Artificially Intelligent," the lush, rhythmically-propulsive soundscape "All Armed" features a bass line, percussion and a synthesized melody. "Amirador" builds on a sustained drone, bringing the whole collection to a gentle, minimal conclusion.

So, there is a general progression from acoustic to increasingly electronic sounds over the course of the album. Frahm considers the Encores set to be complementary to the All Melodies album. But it arguably gives a fuller picture of his range, as both composer and performer.