BY C. MICHAEL BAILEY
February 7, 2014
Sign in to view read count
February's Jazz Quanta is a beautifully mixed bag of blues, jazz instrumental and classical. There is never a dull moment.

Renee' and the Walkaways—The Walkaway Sessions (Self Produced, 2013). Vocalist Renee' Cheek heads up the piquant gumbo talent of her very own band, the Walkaways. The Walkaway Sessions is a Louisiana grassroots affair produced by David Hyde, who also provides bass playing. The music is a rich roux drawing equally from the blues, country, zydeco, Tex-Mex and jazz...but make it heavy on the country. Originals "No Regrets," "Poor Cold Heart" and "I Don't Need You" are the country anchor that holds this musical boat steady, allowing this crack band and vocalist to explore the creole wonder of "Easy Come Easy Go" or the swampy R&B of "Too Stupid To Stop." Cheek's vocals are stripped down and unadorned, infused with the necessary twang to make her singing authentic. With Dr. John on organ and Marcia Ball singing background vocals, one can not go too far afield. When Cheek gets that full horn section behind her, she is a wonder.

Scenes— But Not Heard (Origin, 2014). Of their second recording, Along The Way (Origin, 2006), guitarist and All About Jazz contributor John Kelman said, "There's an airy, ECM-like feel to much of the album... more in its aesthetic than any direct stylistic reference." That immediately frames the music of guitarist John Stowell, bassist Jeff Johnson and drummer John Bishop, giving it a definition and location. The "ECM sound" at once defies accurate definition while immediately preparing one's ear. This is true of Scenes' fifth recording which features the addition of saxophonist Hans Teuber to great effect. It is Teuber's flute suspended over the plush and understated blanket of sound that Stowell and trio place beneath it that beckons ECM comparisons. Light and airy, these seven pieces make up a seamless sonic poem that grows with each listen. Fertile is the band's mind and talent for a sound ethereal.

Shawn Maxwell—Shawn Maxwell's Alliance (Chicago Sessions, 2014). Chicago-area Multi-reeds player Shawn Maxwell unveils his big band. But this is no ordinary big band. Inspired by the 1970s minimalist compositions/instrumentations of composer Philip Glass: using high reeds and the vibraphone in complex and repetitive figures that develop into more elaborate sonic thoughts over the course of the recordings 18 relatively selections. This is music as cacophony. "From Parts Unknown" is the creative result of Bach meeting Philip Glass, the two having a couple of glasses and Bach demonstrating his concept of counterpoint that was to come after The Art of Fugue. Maxwell favors simple figures over which to place solos, solos that could be wordlessly vocal or instrumental. The band touches the free ("Plaza") and near-New Age ("Waiting Food"). "Radio Hit Number Four" is a cry from the analyst's couch that resolves...into nothing but the following "Here's Your Swing Tune" which is anything but. Maxwell has a dry musical sense of humor that he uses to challenge the listener to hear at higher levels. His "big" band magnifies this effort.

Marcos Pin & Yago Vazquez—Duology—Session 1 (Self Produced, 2014). Five famous jazz compositions, a little over 30- minutes long: this slim CD might be better termed an EP save for the intelligent and blistering performances by guitarist Marcos Pin and pianist Yago Vazquez. Promising a multivolume series of duets performing standards, Pin inaugurates things with Duology— Session 1, pitting guitar against piano. Alto saxophonist Charlie Parker provides two of the five selections here: a Hot Club take on "Donna Lee" and muted and introspective "Dewey Square." Pin and Vazquez play foil to one another, effectively comping behind one another. On "Donna Lee" Pin establishes a single- string walking bass behind Vazquez, who boils beyond a simmer in his solo. The pair straighten out Thelonious Monk's "Blue Monk" into the spooky blues it is. Pin plays his best Joe Pass in the solo passages and his best Freddie Green in the rhythm sections. The pair take the bebop out of "All The Things You Are, giving the piece an impressionistic feel, while peeling "You don't KNow What Love Is" away from Chet Baker and injecting it with a bit of bop. More to come. 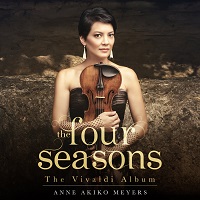 Anne Akiko Meyers—The Four Seasons: The Vivaldi Album (Entertainment One, 2014). Is there the least inkling of need for one more "The Four Season" when the record bins (records?) are chock full of so many cutouts that they could provide anyone with a CD (or MP3) player with a perfectly good performance rendered in whatever historic flavor desired? There is, if that performance can be a bitingly fresh and vibrant as that of Anne Akiko Meyers, sawing her 1741 "Vieuxtemps" Guarneri del Gesu against a fine English Chamber Orchestra led by a historically informed David Lockington. The four concerti are dispatched with beautiful and faithful authority, Meyers' playing muscular when necessary and delicately nuanced throughout. Temp are brisk, but not so as the early period instrument performances of the 1980s. Lessons learned and Meyers' evenly distributed maturity since her debut in 1992 make this the opportune time of perform these Vivaldi warhorses with an informed grace and presence. 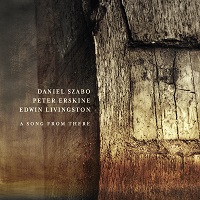