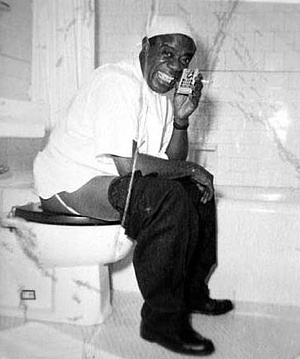 Some of the 20th century's greatest eccentrics were jazz musicians. That is no surprise, given the link which psychologists long ago suggested exists between creative thinking and "abnormal" behavior, and which has been confirmed by recent neurological research locating both activities within the same area of the brain.

Trumpeter and singer Louis Armstrong's lifelong evangelizing of patent medicine laxatives is well known—the trumpeter famously had greetings cards made which showed him photographed sitting on the toilet, his pants round his ankles, with the motto: "Satchmo says put it all behind you."

Other musicians' eccentricities have been less well documented—but that is about to change. The Institute of Jazz Studies at Rutgers University today published a paper titled Fruitcakes and Psychos: The Offstage Antics of American Jazz Musicians. Here are a few of the entries:

Benny Goodman. When he was 15, Goodman was arrested for stealing women's panties from washing lines in neighbors' back gardens. The habit persisted throughout the clarinetist's adult life. On tour, Goodman would disappear when the band bus halted for a meal break, and come back with paper bags stuffed with undergarments. By the time a tour ended, half the space in the bus' storage compartment was filled by Goodman's pilfered panties. In an odd twist, he would present the eight most form fitting examples to his wife as Hanukkah gifts.

John Coltrane. Albert Ayler is well known for his love of leather suits (green ones, particularly). Less well known is fellow saxophonist Coltrane's obsession with lederhosen. Coltrane bought his first pair on tour in Germany in 1963 and is believed to have acquired over 300 pairs by the time of his death four years later. He regularly threw barbecues at his upstate New York home where he and pianist Alice Coltrane would model their latest purchases to music provided by a local oompah band. Pianist McCoy Tyner and drummer Elvin Jones both quit Coltrane's "classic quartet" when Coltrane insisted they wore lederhosen on stage.

Miles Davis. The trumpeter's impish sense of fun sometimes bordered on the absurd. He would surprise audiences by turning his back to them, slipping on a red clown nose and then stopping the band while he told jokes. Critics accused him of tomming, but Davis said he got his inspiration from Louis Armstrong. "You can't tell a single joke that hasn't already been told by Armstrong," he once said. "We is happy folks, yassuh boss," he added.

Ella Fitzgerald. Tourette's syndrome is not, strictly speaking, an eccentricity, more a tragic mental illness whose sufferers deserve our sympathy. But hey, it gives the rest of us a lot of laughs! Fitzgerald's friends long kept secret the fact that the singer was a person living with TS, but in his autobiography, I Slept At The Ritz, The Band Stayed In The Bus (University of Winnebago, 2001), her manager, Norman Granz, revealed all. Performances were frequently halted when fighting broke out between Fitzgerald and audience members who she had called "motherfuckers" or "pig bastard whores." And Granz wrote that the recording session for Ella And Louis (Verve, 1957) briefly broke down when Fitzgerald told Armstrong he was "screaming faggot stoner with a mouth like a camel's butt."

Coleman Hawkins. Jazz's first tenor superstar was unable to walk past a rest room without going in and attempting to urinate, even if he had no physical need to do so. If he knew it would be a while before he came across another rest room, Hawkins would linger at the urinal for as long as it took. As a consequence, he was several times arrested on charges of "lewd conduct." Hawkins' bitter enemy, Lester Young, once deliberately set Hawkins up by telling a club manager enquiring of Hawkins' whereabouts, "Lady Hawk is in the john, and she ain't coming out till she's satisfied." For his part, Hawkins was frequently approached by men who were in a rest room looking for sex; he took to carrying a stuffed raccoon for protection, using it to beat around the head anyone who came on to him.

Dozens more musicians' eccentricities are detailed in the Rutgers study, which includes a request for readers to write in with cases not covered in the paper.