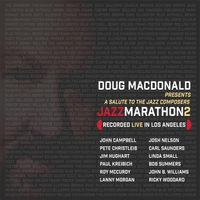 For those who thought that guitarist Doug MacDonald's happy-go-lucky jazz marathon had crossed the finish line with the release more than a year ago of Just for Fun, the good news is that MacDonald and his talented teammates have found their second wind and the marathon continues through a second effervescent two-CD session taped at the Crowne Plaza Hotel in Redondo Beach, CA. The group remains largely intact, with trumpeter Carl Saunders and saxophonist Pete Christlieb added and trombonist Linda Small, bassist Jim Hughart and pianists John Campbell and Josh Nelson replacing Les Benedict, Luther Hughes, Llew Mathews and Andy Langham, respectively, with no discernible loss in continuity or quality.

As before, the bill of fare consists for the most part of well-known jazz standards with one original by MacDonald ("Bossa Don") pressed onto Disc 2. This time around, there are no songs from the Great American Songbook as there were on Just for Fun, which included seven. The rationale remains the same: to use front-liners in various formats with a rotating pair of rhythm sections to produce an almost uninterrupted flow of music that lasts for several hours (i.e., a marathon), an idea first proposed to MacDonald by longtime friend Don Thomson. It's the kind of enterprise that could be impaired by the presence of one or more weak links; happily, there are no slackers to be found on this bandstand.

Nor are there any less than admirable themes, from Tadd Dameron's "Our Delight" to Sonny Rollins' "Sonnymoon for Two" sandwiched around classics by Thelonious Monk, Horace Silver, Dizzy Gillespie, Charlie Parker, Clifford Brown, Blue Mitchell, Benny Golson, Frank Foster and an Ellington medley ("Just Squeeze Me" / "What Am I Here For" / "Sophisticated Lady" / "Cottontail"). As for soloists, those who follow contemporary jazz, West Coast chapter, needn't be reminded that MacDonald, Christlieb, Saunders, Campbell, Nelson, trumpeter Bob Summers, alto Lanny Morgan and tenor Rickey Woodard are among the most perceptive and resourceful improvisers the left coast has to offer, while Williams, Hughart and drummers Paul Kreibich and Roy McCurdy (holdovers from Just for Fun) leave no grounds for censure in the rhythm department.

Be advised that the "marathon" is likely to try your attention span, as no number on either disc runs for less than seven minutes and the Ellington medley lingers for more than sixteen, as does Foster's Basie touchstone, "Shiny Stockings." For those who hunker down for the long haul, however, their forbearance will be amply rewarded. MacDonald and friends offer more than one hundred-thirty minutes of scintillating small-group jazz, almost every one of which is explicitly persuasive and well worth taking to heart.