By Jack Bowers
November 5, 2018
Sign in to view read count 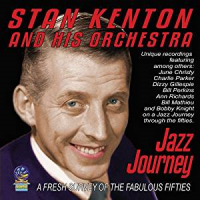 For those who thought that reissues of albums by the Stan Kenton Orchestra had faded away as the well ran dry, think again: from Sounds of Yesteryear comes a welcome and invigorating Jazz Journey, traversing half a dozen concerts by the superb Kenton Orchestra that consist for the most part of unissued material from the years 1953-60, more than half of it recorded by famed engineer Wally Heider.

As author and Kenton scholar Michael Sparke observes in his perceptive liner notes, these were "arguably Kenton's most popular years, the 'Concepts' era of the 1950s (roughly the period between Innovations and the Mellophoniums)." As he further notes, Jazz Journey "avoids the well-known music and focuses on the less familiar, generally from previously unreleased performances." Of special interest is the concert held in Portland, OR, on February 25, 1954, whose celebrated guest artists were the peerless alto saxophonist Charlie Parker ("Night and Day," "Cherokee") and Bird's alter ego and fellow bebop pioneer, trumpeter Dizzy Gillespie ("On the Alamo" and "Ooh-Shoo-Be-Doo-Be," on which Gillespie also sings). According to Sparke, the all-star concert was a part of the 1954 Festival of Modern American Music. Even though Bird especially seems out of his element in a big-band setting, the concert is of great interest from an historical perspective.

A year earlier, at the Hollywood Palladium, vocalist and Kenton alumna June Christy appeared with the orchestra on the eve of her departure to entertain American troops in Korea, singing the standards "If I Should Lose You" and "Jeepers Creepers," both arranged by trombonist Bill Russo. There are two numbers from November '56, at the Macumba Club in San Francisco, "The Nearness of You," arranged by Johnny Richards, and "I Remember You," arranged by Bill Holman. Holman's "Sketch" (later titled "The Opener") leads off the aforementioned Palladium concert from January '53, which also includes Pete Rugolo's treatment of the Rodgers and Hart standard "Blue Moon."

Completing the splendid anthology are two numbers from March '58 at the Rendezvous Ballroom in Balboa Beach, CA, featuring vocalist Ann Richards, three from a June '59 engagement at the Red Hill Inn in Pennsauken, NJ, and five from a February '60 concert in Tacoma, WA. Russo arranged "Nobody Knows the Trouble I've Seen," Holman "Out of This World" for Richards, while Bill Mathieu was the Red Hill Inn's draftsman ("Lazy Afternoon," "Lush Life," The Thrill Is Gone"). In Tacoma, Gene Roland arranged the prosidic "Opus in Chartreuse Cha Cha Cha" and Billy Strayhorn's "Take the 'A' Train," Kenton "The Night We Called It a Day," "Early Autumn" and "Theme & Sign-Off."

As a bonus, Kenton introduces some numbers along the way, and even with the likes of Parker and Gillespie holding forth in Portland, one shouldn't discount the leader's broad arsenal of blue-chip soloists from that span of the orchestra's heyday, including trumpeters Conte Candoli, Buddy Childers, Lee Katzman and Bud Brisbois; saxophonists Holman, Richie Kamuca, Bill Perkins, Lennie Niehaus, Charlie Mariano, Bill Trujillo and the too-seldom-heard Marvin "Doc" Holladay; trombonists Bobby Burgess, Jimmy Knepper and Kent Larsen; bass trombonist Bobby Knight and bassist Pete Chivily. That leads to the inescapable Achilles heel in any series of concert / nightclub recordings from sixty or more years ago, namely sound quality. While it varies in some degree from date-to-date and year-to-year, the sum total leaves no doubt as to where and when these recordings were made. Even so, that may not unsettle in the least those to whom Jazz Journey is aimed: passionate Kenton enthusiasts who are eager to hear and embrace any forgotten treasures that may emerge from history's archaic vaults. From that vantage point, it readily achieves its purpose.

Sketch; Blue Moon; If I Should Lose You; Jeepers Creepers; Night and Day; Cherokee; On the Alamo; Ooh-Shoo-Be-Doo-Be; The Nearness of You; I Remember You; Nobody Knows the Trouble I’ve Seen; Out of This World; Lazy Afternoon; Lush Life; The Thrill Is Gone; Opus in Chartreuse Cha Cha; The Night We Called It a Day; Early Autumn; Take the “A” Train; Theme & Sign-off.