Jimmy Knepper, a jazz trombonist best known for his productive but stormy association with Charles Mingus.

Over the course of a career that began when he was in his teens, Mr. Knepper was a featured soloist in countless bands, big and small. But his reputation as one of the most original trombonists of his generation rests largely on the music he made with Mingus from 1957 to 1962.

Mr. Knepper's distinctively gruff sound and loose-limbed phrasing were essential elements in some of the most celebrated albums by Mingus, the great bassist and composer, including ''The Clown,'' ''Tijuana Moods'' and ''Mingus Ah Um.''

But relations between the plain-spoken Mr. Knepper and the notoriously volatile Mingus were often tense, and they came to an abrupt and violent turning point during preparations for a New York concert in 1962. Mr. Knepper recalled in a 1981 interview with Lee Jeske of Down Beat magazine that in the course of an argument about Mr. Knepper's role as music copyist for the concert, Mingus ''just kind of slapped me in the mouth,'' and the blow ''just happened to break off my incisor.''

The injury seriously affected Mr. Knepper's embouchure; it took him several years to regain his full range on the trombone.

Mingus was convicted of third-degree assault (his sentence was suspended), and a fruitful collaboration was seemingly ended forever. Surprisingly, though, Mr. Knepper worked with Mingus again in the 1970's, appearing on the album ''Let My Children Hear Music'' in 1971, at a Carnegie Hall concert in 1976 and on the last three albums Mingus recorded before his death in 1979.

By January 1963 Knepper was able to play again after a fashion and was hired by Peggy Lee to back her at the Basin Street East in New York.

Knepper's trombone solos and ensemble playing had been a vital part of Mingus's bands for five or six years until then. He was a vital figure in much of the composer's best work, including the albums “The Clown”, “Tonight at Noon”, “Mingus Oh Yeah”, “Blues and Roots”, “Mingus Ah Um” and the unique “Tijuana Moods” suite of 1957.

During this time he had also graced bands of similar moment led by Gil Evans, with whom he recorded in 1960 his unforgettable classic feature on Where Flamingos Fly, surely one of the most beautiful and moving performances ever recorded on the instrument.

Although his trombone playing was most intricate, full of flying triplets and unusual intervals, Knepper always made it sound easy and he became the idol of other trombonists during the Sixties and Seventies. Unlike some of the brilliant technicians of today, Knepper kept a high emotional content in his work and involved his international audiences, who responded enthusiastically.

This was the apex of Knepper's career. He first took up the alto horn when he was six years old and in military school. He played in the school's marching bands and when he left, because his mother wanted him to play in marching bands and orchestrally, changed to the trombone. He finished his music studies in Los Angeles, and joined the Freddie Slack band, recording with Slack in 1947. Bebop had arrived and the big-band era was coming to a close. The result was that Knepper's playing reflected the swing style of the trombonists Dickie Wells and Lawrence Brown and absorbed the revolutionary alto sax style of Charlie Parker. His tone on the instrument avoided the brassy and concentrated on a fleet dexterity to express his original ideas.

But his years as a soloist still lay ahead. In the late Forties and early Fifties he followed the hectic sideman's path through the tail-end of the big bands, working for Gene Roland, Charlie Spivak, Charlie Barnet and Woody Herman. He briefly formed a quintet with Dean Benedetti, a saxophonist obsessed with the work of Charlie Parker. Knepper helped Benedetti in his mission to record unofficially as many of Parker's solos as he could - their efforts survive in a much-coveted seven CD set.

Knepper joined the Claude Thornhill band in 1956 for its tour of American bases in Germany, France and North Africa. In February 1957 he made the fateful move to the Charlie Mingus group, where he replaced one of his friends, another white trombone player of similar talents, Willie Dennis.

Although he had by then left Mingus for Tony Scott's group, Knepper was delighted to be named “New Star” on the trombone by Down Beat magazine in 1959 for his work with Mingus. He was sure more work would follow as a result:

I didn't work for three months, and I panicked. Then Gene Roland got me into the Stan Kenton band. We made a cross- country tour. Kenton was one of the nicest leaders I ever worked with. A real gentleman.

Knepper had to leave the band because of his wife's illness: “After I left the band immediately went into a New York studio and recorded all the things that I had soloed on.”

Frequent returns to work with Mingus in New York were peppered with trips abroad. He toured in Africa with Herbie Mann in 1960 and was in the Benny Goodman band for the disastrous tour of the Soviet Union in 1962. The members of the band got on well with the Russians, but Goodman's behaviour towards his musicians made them vow never to work for him again.

Knepper worked as a member of the Gil Evans Orchestra whenever he could between 1960 and 1967, interspersing his jazz work with jobs in Broadway pit bands - he was in the band for Funny Girl on Broadway between 1964 and 1966.

Mr. Knepper characterized his return to the Mingus fold as a kind of grim inevitability. Knepper spent much of the 1980's as a member of Mingus Dynasty, a group devoted to playing Mingus's music and made up primarily of former Mingus sidemen.

Idol Of The Flies 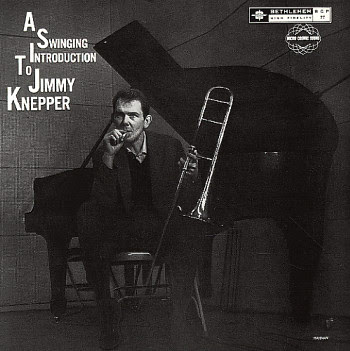 All About Jazz musician pages are maintained by musicians, publicists and trusted members like you. Interested? Tell us why you would like to improve the Jimmy Knepper musician page.