Lennie has also been composer for numerous Clint Eastwood's films including Pale Rider, Unforgiven, The Bridges Of Madison County, Absolute Power, True Crime, Space Cowboys, and Bird, the award- winning tribute to legendary bebop artist Charlie Parker. In 1994 he won an Emmy for his score for the Showtime film Lush Life.

Lennie Niehaus admits that he “has every reason to be proud and happy”. In his early career he was acclaimed internationally as jazz altoist, composer and arranger (Stan Kenton and his own six albums as leader). Then, in these latter years, Lennie has garnered accolades as a leading Hollywood film composer. Yet he has always continued to utilise and expose his jazz background. This has culminated in his much-envied assignment as musical director and composer on the upcoming Charlie Parker Bird film, produced and directed by Clint Eastwood.

Lennie’s sister was a concert pianist and his father was an expert violinist. Père Niehaus started his son on violin at age seven. “I went from violin to oboe to bassoon,” Lennie recalled. “Then, at thirteen, I took up alto and clarinet.” He went on: “I was always interested in composing and writing; I wrote music as a young teenager. I had always heard advanced chords, listening to my sister and father play romantic era music.” In 1946, while still studying music at college, Lennie started his professional career, along with reedmen Herb Geller, Herbie Steward and Teddy Edwards. He went with the Stan Kenton orchestra for six months, and then was drafted into the Army in 1952. Discharged in 1954, he rejoined Kenton for five years.

“I left in 1959"I wanted to write. I came back to town (Los Angeles) to arrange for the King Sisters, Mel Tormé, Dean Martin and Carol Burnett.” It was in 1962 that Lennie started orchestrating for that great film composer Jerry Fielding, whose untimely death at a young age musicians still mourn. “I did about sixty or seventy TV shows and films for Jerry,” Lennie recalled. Since Fielding’s death, Lennie has been a leading film composer in his own right. “And I always do my own orchestrating. I always think orchestrally,” Lennie informed.

In films Lennie never forgets his jazz roots. He instanced: “The story of the film City Heat was cast in the ‘thirties. I wrote jazz of that period using people like altoist Marshal Royal. Bill Perkins came in and played like Lester. I had a jazz violinist who sounded like Stephane Grappelli. Then there was a boogie woogie sequence with three pianists Pete Jolly, Mike Land and producer Clint Eastwood.” In the last eight years Lennie had not played his alto at all. Today he’s back blowing, reportedly in top form, although he confessed: “Now I hear a little differently.” The Charlie Parker film, tentatively titled Bird, has just finished shooting. Release is expected for the Autumn.

Clint Eastwood, who produced and directed, reportedly once played for beer and tips in an Oakland, California bar. A jazz fan from way back, weaned on his father’s Fats Waller records, he stated that his “first idol was Lester Young.” His first exposure to Bird was in an “incredible Jazz at the Philharmonic concert” that also included Coleman Hawkins and Flip Phillips. When Eastwood was in the Army at Ft. Ord, California, he would go to hear Gerry Mulligan and Chet Baker. It was at Ft. Ord that he first met Lennie Niehaus.

As the Parker film’s musical director, Lennie revealed: “I went to all the musical scenes and I helped also with all the editing. Unlike past films on jazz, this one will be a hundred per cent authentic.” Playing Bird in the movie is twenty-six year-old Forest Whitaker, who once played trumpet. Lennie taught all the alto fingerings to Whitaker in the Bird numbers featured “Now’s The Time” and “Just Friends” are just a couple mentioned. Lennie told me: “I have been listening to Bird since I was fifteen; I had taken down a stack of his stuff.” As Lennie and I talked on the Burbank Studios movie lot, he pointed out a reconstructed brownstone house just across from where we were seated. “This was the house built for Chan’s (later Bird’s wife) apartment. It’s exactly like the one she had in New York.” (Chan is a consultant on the film).

There’s a supposedly true story that Bird had two of his friends serenade Chan outside her window with “Why Do I Love You?” Then Bird came along on a horse and doffed his hat. “This is all in the movie,” Lennie said. “I taught the song to the two actors.” Other scenes show Bird at age sixteen in the Reno Club, Kansas City, where they didn’t like his playing and the drummer threw a cymbal at him. “For young Bird in this episode we used Forest Whitaker’s young brother, who is also aged sixteen.” All the alto playing heard in the film is from actual Charlie Parker recordings.

“A lot of the stuff we used was never released,” Lennie told me. “There’s nine choruses of “Lester Leaps In” jetted at about sixty bars a minute. Then there’s some stuff that Lennie Tristano recorded in his own home studio, with himself on piano, Bird, and Art Blakey playing brushes on a telephone book.” The sound engineers isolated Bird’s solos by cutting the highs (cymbals, drums) and the lows (bass), thus eliminating the original, badly recorded rhythm sections. Then Ray Brown (bass), John Guerin (drums) and Monty Alexander (piano) were brought in to record a modern"sounding background to Bird’s solos. “The original piano (in that register) was obviously hard to eliminate completely but is covered by Monty Alexander’s playing,” Lennie said.

Numbers such as “Koko” (Cherokee”) were re"recorded using Jon Faddis (for Dizzy Gillespie who was unavailable), Walter Davis (piano) and bassist Ron Carter. To act the part of the young Dizzy they used Sam Wright. “For ‘Ornithology’ I showed Sam how to breathe and finger,” Lennie said.

“Strangely, Sam was born thirteen miles from Dizzy’s birthplace in South Carolina.” Michael Zelniker played the part of trumpeter Red Rodney, who also plays on the soundtrack and, because of his close association with Bird, was consultant on the picture.

“There was one number where we didn’t use Bird’s actual recorded sound,” Lennie informed. “A take of ‘Now’s The Time’ featured altoist Charles McPherson from San Diego. There were many suggestions for a Bird sound"alike Phil Woods, Joe Maini, Frank Morgan but none was as close as McPherson.” Lennie himself got to play alto for one scene. In the Reno Club episode there is a tenor/ alto cutting session with James Rivers and Lennie supplying the soundtrack.

To ensure complete authenticity, the old Birdland, Three Dueces and a complete 52nd Street was built at the Burbank Studios. To further illustrate the authenticity, Lennie pointed out: “We sought out a twenty-two-year-old white bop drummer who played left-handed because Stan Levey was the left- handed drummer with Bird on 52nd Street.” Show less 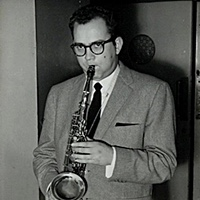 All About Jazz musician pages are maintained by musicians, publicists and trusted members like you. Interested? Tell us why you would like to improve the Lennie Niehaus musician page.