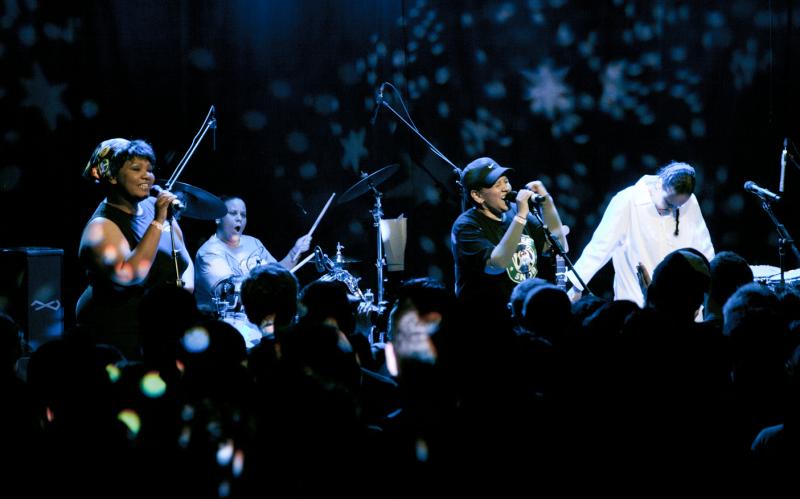 The leader of this quartet is actually its least-known member, outside of the hardcore free jazz zone. This gig arrived towards the conclusion of a fortnight's curation at The Stone by Joe Morris, who played upright bass for Brazilian tenor saxophonist Ivo Perelman. The other members were pianist Matthew Shipp and drummer Gerald Cleaver. An impressive combination of players, even before their first notes were sent running. Microphones were strategically placed, and maybe this set will be publicly released one day. That would be a good move, given the potency of the single improvisation presented. Around an hour's worth of fierce momentum, broken up into various subsections, but never relinquishing its linear push.

Initially, the vocabulary was not so removed from the expected roles for each player, but a variety of subversions were on the way. Perelman deliberately focused on a narrow mission of piercing, prodding, repetitive enunciations, highly rhythmic in their progress. Morris and Cleaver set up a blurring storm in the lower depths, whilst Shipp latched onto Perelman, underlining with extremely hard and dense ramming, interspersed with flights of steel-fingered soloing dexterity. His pointillist strikes were of the Cecil Taylor school, but dusted with blues or even gospel trimmings. The overall structure wasn't too far removed from bebop changes, but with the language and execution operating in a more extreme area. Perelman gave way to Shipp, then Morris soloed, followed by a brief lonesome detonation from Cleaver. Perelman became increasingly involved, his cyclic screaming getting so forceful that he began to shower the front row with spittle.

Cleaver introduced the first bout of unpredictability, setting up an intensely repetitive drum pattern that was equal parts rock and funk, hunkering down to his obsessive business. Once again, Shipp responded in kind, and Morris began to set up his own hard-fingered riff. Several times, Perelman's single-mindedness gave way to a restrained silence at the edge of the action, leaving the remaining threesome to brew, lending his reappearances a renewed energy. Shipp moved from brutally slamming rhythmic structures to unfettered single note trills, and it was this contrast that dominated the character of the quartet's improvisation. Maybe the single piece was just a touch too long and maybe Perelman could have periodically widened his vocabulary, but the main mass of this extended adventure vibrated with an immense creative power, emanating from a particularly exciting chemical combination of players.

Post-punk Bronx funk group ESG has been together for 35 years, with a relatively brief dormant period in the late 1980s. In recent times, the group has become addicted to threatening repeatedly that a given show will be its last ever appearance. It's a retirement that seemingly never arrives. Last June, ESG heralded its gig at (le) Poisson Rouge in Greenwich Village as its absolute final show, then it was booked in at The Bowery Electric for another "ultimate performance," but had to postpone in the wake of the hurricane. So here it was again, a few months later, in a rather too cosy club, completely sold out and its audience barely able to budge. It's an efficient way to sell tickets, but can ESG resist playing yet another farewell gig when its audience displays such enthusiasm?

This review is as much concerned with event reportage as artistic assessment. It was almost physically impossible to move anywhere once ESG started playing, but a vantage point near the doorway to the basement space made a surprisingly good perch. Even if the view was often obscured by stray limbs, the club's powerful sound system threw the band's weight right to the back of the room, and almost up the stairs. Indeed, the stairway provided almost the only safe haven for dancers. Frustratingly, inside the joint there was no room to actually respond to the nervy ESG disco-funk twitch.

Drummer Valerie Scroggins remained the core triphammer device for rhythmic tension, working closely with Nicole Scroggins' sinuous bass lines. Renee Scroggins' ethereal, deadpan vocals still stand in the centre, her between-song patter sounding much more friendly and down to earth when set beside her singing tone of desolate alienation. The band no longer features a rhythm guitarist, so its sound has returned to a starkly minimalist evocation of seedy post-punk skeletal wired-upness, the epitome of dark ages New York at the turn of the '70s into the '80s. Most of its sleek steppers were delivered, including "Moody," "You're No Good" and "You Make No Sense." ESG will surely return!

This gig was at the opposite scale to the ESG show. There were only three audience members at The Firehouse Space, a wonderful new-ish addition to the Brooklyn venue scene in Williamsburg. Firehouse is psychologically difficult to place, given that it's nowhere near any other haunts, or familiar music zones, but the walk from the Graham Avenue subway station is quite short, really. The previous Saturday, the venue had a good turnout, particularly considering that this is a highly competitive evening in New York City. Firehouse has an intimate, homely studio vibe, like a ground level loft. It's literally situated in a converted fire station. The acoustics are pristine, and visiting pianists talk about how much they appreciate the in-house piano. Organizer Sandra Sprecher operates an adventurous booking policy that veers from improvisation, through out-there jazz, and then towards moderne composition and electronic music.

We three sets of ears were privileged to experience a magical sequence with a highly specialized nature. Trumpeter Frank London (The Klezmatics) and singer Jeremiah Lockwood (The Sway Machinery) collaborated to produce a set of cantorial reinterpretations as Songs Of Zebulon. They were joined by pianist Shoko Nagai, trombonist Brian Drye and tuba huffer 'n' hefter Ron Caswell. Specifically, this outfit shaped the old khazones of Zebulon Kwartin, a repertoire of Ashkenazic song. Born in Ukraine, Kwartin eventually became the head cantor at Temple Emanuel in Borough Park, Brooklyn, and most of his recordings were laid down in New York City. In 1927, he moved to Newark, New Jersey, where he remained until his death in 1953. Lockwood was a member of his grandfather Cantor Jakob Konigsberg's choir, so he's certainly been steeped in the tradition.

Beginning with Nagai on rickety pump organ, and Drye using his small keyboard, the players set out to frame Lockwood's voice with a sensitized spread of harmonized cushioning. When Drye picked up his accustomed 'bone, the three horn players operated as a sweetly ringing, golden choir, Nagai hoisting her accordion, then moving to piano, or into its ghostly interior. Both London and Drye enjoyed spells on the pump organ, as the subtle sonic veil ruffled its character for each song.

When Lockwood started to sing, the effect was quite startling. His voice traversed a remarkable range of expression, swooping and diving, filled with emotional precision. To a listener not versed in the ways of cantorial performance, this was an exotic mystery realm, but as with many forms of music from around the world, the words, phrasing and delivery still commanded an intensely communicative power. Briefly, Lockwood picked up his dobro for an instrumental piece, using bottleneck to craft a language that had absorbed the sound of the oud as well as the techniques of Delta blues steel guitar. The set was very short, but of an extreme density, a rich delicacy of the like that has rarely been heard by most of our ears.

Back to the crowds, later that same evening, although the house wasn't quite as crammed as might be anticipated for this rendition of 1992's Bizarre Ride II The Pharcyde (Delicious Vinyl). Despite the usual longueurs of a hip hop show, when the current edition of The Pharcyde eventually invaded the stage, everything changed. This was that rare beast: a rap gig where every second counted, where no flab was wobbling, no egos were extended and the Los Angeles crew got right down to the heart of its inspired four-man (and more) criss-crossing wordplay. Fatlip, SlimKid3, J-Sw!ft and L.A. Jay emanated a bounding, humor-filled, sharp-witted compaction of kinetic energy, rolling through classics from the album, including "Oh Shit," "Officer," "Ya Mama" and "I'm That Type Of Nigga."