By Dan Bilawsky
February 8, 2013
Sign in to view read count 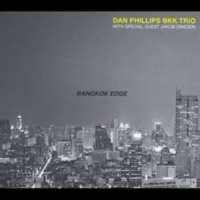 Thailand isn't exactly known the world over as a jazz mecca, but that doesn't mean it doesn't have its fair share of talent in this department; one need look no further than the back cover of guitarist Dan Phillips' Bangok Edge to discover the names of some of the movers and shakers on the Thai jazz scene.

Phillips, who hails from America but lives in Thailand and serves on the music faculty at Silpakorn University, put together a simpatico trio with two of Thailand's most impressive players—frequent drumming colleague Chanutr Techatana-Nan and top flight bassist Pornchart Viriyapark. Together, these three men are responsible for the tight and tasty music on Bangok Edge, but they're not responsible for the existence of the CD itself; this album only came to be because of the fourth man in the picture: Danish tenor saxophonist Jakob Dinesen. When Dinesen came gigging through Bangkok in early 2012, he connected with Phillips, who immediately recognized the strong rapport that they shared. Dinesen's presence became the impetus to convene a trio-plus-one session that yielded half an album's worth of material; the remaining tracks feature the trio sans guest.

While Phillips' last three albums focused on original material, Bangkok Edge is a mostly-standards record with a pair of blend-in originals rounding out the program. The song selection doesn't feature anything out of the ordinary, but Phillips avoids ordinary run-of-the-mill interpretations of this music. He brings a fine arranging touch to well-covered gems ("Beatrice," "Days Of Wine And Roses") and lets the strength of solo personalities carry the day on straight-shooting takes ("26-2").

Dinesen's appearances make for some thrilling stuff ("Beatrice," "Days Of Wine And Roses"), but Phillips ultimately carries the date on the strength of his own work. He plays like a modern slanted cross between John Abercrombie and Jim Hall, which is no small feat. He carries lots of firepower in his lines, but it's not power of the ear-piercing variety; the volume never reaches eleven on his amp but the intensity goes well beyond that mark. He tears it up on his own "Blues For ?," his 5/4 rewrite on "Have You Met Miss Jones" and virtually every other track on the program, but he has some help along the way. Techatana-Nan and Viriyapark know when to push and when to pull back and they each get the solo space they deserve.

Hearing Phillips and his BKK trio mates bond over these classics helps draw attention to their work—and to a jazz scene that doesn't get much ink. Thailand may not be New York, but it clearly has players on that level who deserve a listen.

Beatrice; The Observer; Day of Wine and Roses; A Flower is a Lovesome Thing; Have you met Mrs. Jones?; Ask me Now; 26-2; Blues For?; Naima; Evidence.