Home » Jazz Articles » Alphonse Mouzon: In Search Of A Dream 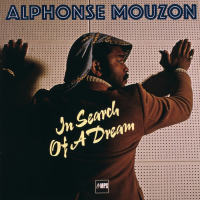 2018 is the 50th anniversary of the founding of the distinguished German jazz label MPS. To mark the occasion, the label's catalogue of over 400 albums has been released on download, and a vinyl and CD remastering and reissue programme has begun. Alphonse Mouzon's In Search Of A Dream is among the first of these discs. Originally released in 1978, it was the fourth—and finest—jazz-rock set the drummer recorded for the label.

During the 1970s, his first decade on record, Mouzon moved effortlessly between acoustic jazz, jazz-funk and jazz-rock. He recorded frequently with McCoy Tyner's acoustic bands on the Milestone label in early and mid decade, while simultaneously making a series of jazz-funk albums under his own name for Blue Note. He is probably best remembered for his jazz-rock outings, however, partly for his work with Larry Coryell, but mostly for his role as a founding member of Weather Report—despite being a member of the band for little over a year and appearing on just one album, Weather Report (CBS, 1971).

There are echoes of mid-1970s Weather Report on In Search Of A Dream, although its arrangements are simpler than Joe Zawinul's, and the degree of post-production much reduced. Part of the resemblance is due to the presence alongside Mouzon of bassist Miroslav Vitous, another Weather Report founding member. Five of the nine tunes were written by Mouzon, two by Vitous, and Weather Report tropes pepper most of them. The references may have been deliberate. Producer Joachim-Ernst Berendt, who died in 2000, suggested that the album was conceived as a tribute to the band.

The other members of the group were never members of Weather Report, but each was to some extent influenced by it. Keyboard player Stu Goldberg had played with fellow-travelling Mahavishnu Orchestra in 1975. Tenor saxophonist Bob Malik often sounds like a ramped up Ben Webster, but his tone is closer to Wayne Shorter's. Guitarist Philip Catherine and keyboard player Joachim Kuhn have more explicitly European sensibilities, but the US group's albums will have been familiar to them.

Given that Mouzon and Vitous are the star members of the band—and that one of them is well known for having an ego the size of a watermelon—it is surprising, but a blessing, that there is a near-complete absence of drum and bass solos on the album. Drummer and bassist are both prominent in the music, but Mouzon only solos on two tracks and Vitous on one. Most of the tracks are largely through-composed ensemble pieces. Some are raucous, others are more reflective. Kuhn's only tune is a lovely acoustic ballad on which he and Malik shine brightly.

The only downer on the set is the closer, "Nothing But A Party," which, as with hindsight the title hints, gets perilously close to disco. But hey, eight winners out of nine runners is a solid score, and anyone who enjoys Weather Report is likely to enjoy In Search Of A Dream too.

Side One: Nightmare; Electric Moon; Shoreline; The Light. Side Two: The Unknown Journey; The Ram And The Scorpio; In Search Of A Dream; Playing Between The Beat; Nothing But A Party.