Home » Jazz Articles » In Memoriam: Jazz Musicians Who Passed in 2018 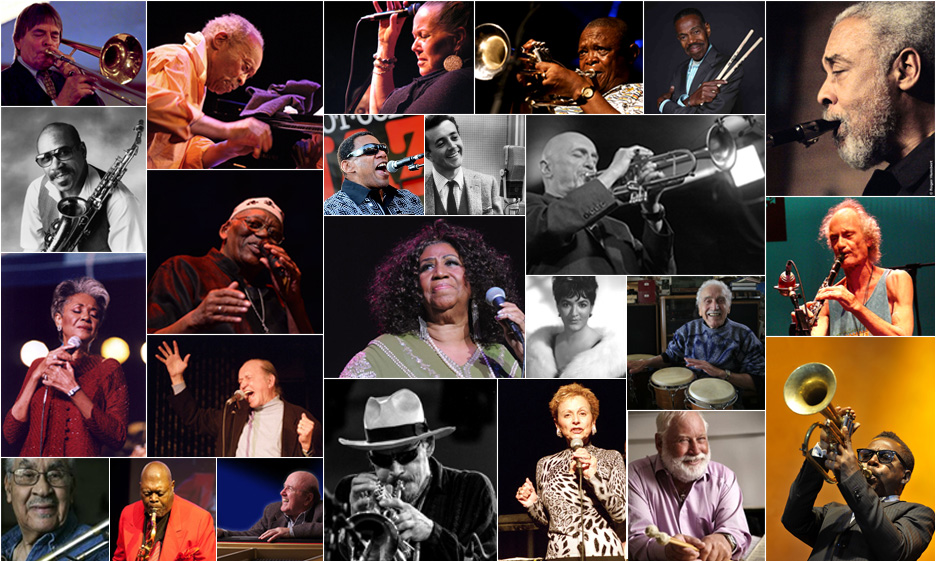 By Maxim Micheliov
December 31, 2018
Sign in to view read count
As 2018 comes to a close, we wanted to take a moment to remember the extraordinarily gifted musicians who made an indelible mark on jazz. With sadness, we bid farewell to NEA Jazz Masters Bob Dorough, Nancy Wilson and Cecil Taylor as well as trumpeters Hugh Masekela, Tomasz Stanko, Jerry Gonzalez and Roy Hargrove.

Marlene Paula VerPlanck was an American jazz and pop vocalist whose body of work centered on big band jazz, the American songbook, and cabaret. [ more ]

Leon "Ndugu" Chancler was a world-renowned American pop, funk and jazz drummer. He further developed his skills and shared his talent as a studio musician, composer, producer and university professor. [ more ]

Wesla Whitfield was a remarkable singer, with a deep love for that rich storehouse of musical treasures often identified as The Great American Popular Songbook. [ more ]

Vic Damone was an American traditional pop and big band singer, actor, radio and television presenter, and entertainer. He is best known for his performances of songs such as the number one hit "You're Breaking My Heart," and "On the Street Where You Live" (from My Fair Lady) and "My Heart Cries for You." [ more ]

Morgana King was an American jazz singer and actress. She began singing at a young age and a professional singing career at sixteen years old. In her twenties, she was singing at a Greenwich Village nightclub when she was recognized for her unique phrasing and vocal range, described as a four-octave contralto range. She was signed to a label and began recording solo albums. Her played Carmela Corleone in The Godfather (1972) and The Godfather Part II (1974). [ more ]

Cecil Taylor was a classically trained pianist and was one of the pioneers of free jazz. His music was characterized by an energetic, physical approach, resulting in complex improvisation often involving tone clusters and intricate polyrhythms. [ more ]

Bob Dorough was an American bebop and cool jazz vocalist, pianist, composer, songwriter, arranger and producer. He was best known as the composer and performer of songs from Schoolhouse Rock!, a series of TV cartoons that appeared on Saturday mornings in the 1970s, 1980s and 1990s. He worked with Miles Davis and Blossom Dearie, and his adventurous style influenced Mose Allison. [ more ]

Jack Reilly was a pianist, composer and educator at several well known music schools as well as privately (Bill Charlap was a student) and worked with Ben Webster, George Russell's Orchestra, Sheila Jordan and others. He was one of the world's leading experts on analysis of the music of Bill Evans, on which he produced two books published by Hal Leonard, Inc. [ more ]

Bill Watrous was an American jazz trombonist. A self-described "bop-oriented" player, he was well known among fellow trombonists as a master technician and for his mellifluous sound. [ more ]

Henry Butlerwas an American jazz pianist and photographer. Known for his technical skills at the piano, particularly versatile with both hands, Butler excelled in a number of sub-genres of jazz throughout his career. [ more ]

Tomasz Stańko was a Polish trumpeter and composer. Stańko is strongly associated with free jazz and the avant-garde. Stańko established a reputation as a leading figure not only in Polish jazz, but on the world stage as well, working with many notable musicians, including Jack DeJohnette, Dave Holland, Reggie Workman, Rufus Reid, Lester Bowie, David Murray, Manu Katché and Chico Freeman. [ more ]

Aretha Franklin was an American singer, songwriter, civil rights activist, actress, and pianist. Franklin recorded 112 charted singles on Billboard, including 77 Hot 100 entries, 17 top-ten pop singles, 100 R&B entries, and 20 number-one R&B singles, becoming the most charted female artist in history. She is one of the best-selling musical artists of all time, having sold more than 75 million records worldwide. [ more ]

A composer, conductor and drummer, Costanzo is best known for having been a bongo player, and was nicknamed "Mr. Bongo." He visited Havana three times in the 1940s and learned to play Afro-Cuban rhythms on the bongos and congas. [ more ]

Randy Weston was an American jazz pianist and composer whose creativity was inspired by his ancestral African connection. Weston's piano style owed much to Duke Ellington and Thelonious Monk, as well as Count Basie, Nat King Cole and Earl Hines. Described as "America's African Musical Ambassador," he said: "What I do I do because it's about teaching and informing everyone about our most natural cultural phenomenon. It's really about Africa and her music." [ more ]

Big Jay McNeely brought the tenor saxophone to prominence in the golden age of R&B, known as the "King of the Honkers," for his wild style and outrageous showmanship. [ more ]

Jerry González was an American bandleader, trumpeter and percussionist of Puerto Rican descent. Together with his brother, bassist Andy González, he played an important role in the development of Latin jazz during the late 20th century. During the 1970s, both played alongside Eddie Palmieri and in Manny Oquendo's Conjunto Libre, and from 1980 to 2018 they directed The Fort Apache Band. From 2000 to 2018, Jerry González resided in Madrid, where he fronted Los Piratas del Flamenco and El Comando de la Clave. [ more ]

Hamiet Bluiett was an American jazz saxophonist, clarinetist, and composer, and was a member of the World Saxophone Quartet. [ more ]

Roy Hargrove was a hard bop trumpeter who rose to prominence as a "young lion" late 1980s. He was a two-time Grammy Award winner. [ more ]

Originally trained as an orchestral timpanist and percussionist Schlüter, motivated by a concert by Lionel Hampton, changed to vibraphone in 1952. In 1953 Michael Naura inquired if Wolfgang likes to join in founding the "Michael Naura Quintet," which he did. The two went on to share the stage for half a century. For 18 years he was additionally a professor at the Hamburg University of Music and Theatre. Many of his students are now well-known musicians. [ more ]

Perry Robinson was an American jazz clarinetist and composer. From 1973, Robinson worked with Jeanne Lee and Gunter Hampel's Galaxie Dream Band. He contributed to Dave Brubeck's Two Generations of Brubeck and played with Burton Greene' s Dutch klezmer band Klezmokum. He was the featured clarinetist on Archie Shepp's LP Mama Too Tight on the Impulse! label. [ more ]

Nancy Wilson was an American singer whose career spanned over five decades, from the mid—1950s until her retirement in the early—2010s. She was notable for her single "(You Don't Know) How Glad I Am" and her version of the standard "Guess Who I Saw Today." Wilson recorded more than 70 albums and won three Grammy Awards for her work. During her performing career Wilson was labeled a singer of blues, jazz, R&B, pop, and soul, a "consummate actress," and "the complete entertainer." [ more ]

A musician idolized by his contemporaries—and particularly by fellow players of the trombone—Green's earliest big band years included stretches with Frankie Carle and Gene Krupa. His work with Woody Herman in the early 1950s brought him widespread attention and frequent mention in jazz polls. [ more ]