Home » Articles » Wallace Roney: If Only for One Night

Wallace Roney: If Only for One Night 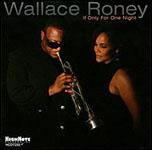 Wallace Roney's six-year association with HighNote—beginning with Prototype (2004), followed by Mystikal (2005), and culminating with Jazz (2007)—has allowed the trumpeter to amass a body of work far more indicative of where he's always wanted to be than his largely mainstream run with Muse in the early 1990s. If Only for One Night—culled from a four-night run at New York's Iridium—continues to paint a broader picture of an artist for whom the lifelong arc of Miles Davis remains an influence, but one distanced from mere mimicry through greater technical facility and an all-encompassing approach to collating a broad set of interests that's in sharp contrast with Davis' more linear evolutionary approach.

Most telling is Roney's statement in Francis Davis' liner notes. "I'm not sure Miles had to give up what he already had to get where he was going," says Roney, referencing Davis' well-documented and lifelong rejection of what came before. Unlike most for whom the spirit of Davis looms large, rather than focusing on a single period, Roney integrates aspects spanning Davis' four-decade run, as well as touchstones from the work of John Coltrane and Herbie Hancock.

With longtime musical partner/brother/saxophonist Antoine Roney and bassist Rashaan Carter back from Jazz, what's most striking is how seamlessly Roney's quintet navigates the broad stylistic markers demanded by both the original material and covers ranging from Hancock's still modernistic-sounding "I Have a Dream," from The Prisoner (Blue Note, 1969) to a darker look at Brenda Russell's lyrical title track (made famous by Luther Vandross), and Tony Williams' "Only With You," which rivals the rhythmic intensity and effervescent swing of the original on Angel Street (Blue Note, 1988), when Roney was a member of the late drummer's quintet.

Roney's quintet is as comfortable with an even fierier take of Prototype's fusion-esque "Quadrant" as it is the intensely swinging "Metropolis," from No Room For Argument (Stretch, 2000)—two originals that demonstrate the trumpeter's acute ability to fashion an eclectic nexus—one clearly hidden to his mentor—where all his innovations meet. Roney's chops have never been more exhilarating or tastefully focused, whether waxing prolific on "Metrolopis" or more intently thematic on his closing, a capella "FMS."

The group's youngest members demonstrate Roney's ever-astute skill in locating unknown but remarkable talent. Cuban keyboardist Aruán Ortiz organically combines synth washes, choppy organ and Hancock-like clavinet to accompany Wallace and Antoine Roney's fiercely funkified solos on "Quadrant," but turns to acoustic piano for his own impressive solo, while drummer Kush Abadey merges contemporary rhythms and post-bop elasticity throughout, his fluid, less-direct approach turning Davis' "I Love What We Do Together" (previously only recorded as a demo by Davis in the mid-'80s) from what might have been slicker fare into something that relentlessly grows from a simmer to a boil.

With even greater emphasis on high powered blowing and group chemistry than recent studio efforts, If Only for One Night is the live album Roney's been harboring for the past several years and further consolidation of where he's been...and where he's going.

Quadrant; If Only for One Night; Only With You; I Have a Dream; Metropolis; Let's Wait Awhile; I Love What We Make Together; FMS.

Title: If Only for One Night | Year Released: 2010 | Record Label: HighNote Records