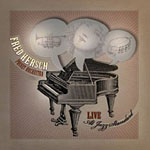 Fred Hersch has amassed an impressive discography since his arrival on the jazz scene in the '70s. In addition to stints with Stan Getz, Art Farmer and Toots Thielemans, and numerous appearances as a sideman, the pianist has recorded over two dozen albums as a leader, co-leader or solo performer, as well as composing extensively. Hersch, who revealed his HIV-positive status as a gay man sometime ago, has also been active in AIDS education, though the past few years have been extremely rough for him, including a three-month long coma, plus battling AIDS-related dementia and pneumonia.

Live at Jazz Standard is one of Hersch's most intriguing releases, as he performs ten striking originals (several of which he previously recorded as instrumentals) with trumpeter Ralph Alessi, vocalist Jo Lawry and drummer Richie Barshay, for an attentive audience at the busy New York City nightclub. The music reveals a diverse background, influenced by Hersch's classical training at times while also delving into nostalgic looks at earlier music forms, as well as forward-looking compositions. The quirky "Stuttering" is a playful post-bop tune that has its share of twists whereas "Light Years" is an intriguing work with Lawry alternating between spoken and sung passages, backed by appropriately spacey accompaniment. The sensual "Invitation to the Dance" is a vocal adaptation of Hersch's "Sarabande" and the tender ballad "A Wish (Valentine)" is a perfect closer, a touching vocal/piano duet.