Rarely does a singer come along in whom virtuosity meets sensitivity. Jo Lawry at once tests the limits of technical facility and explores the furthest reaches of musical expression. Her music, steeped in the jazz tradition without being constrained by its traditional forms and functions, demonstrates a unique combination of maturity and inventiveness.

Born in South Australia, Jo was awarded a 2003 Fulbright Fellowship for study in the United States, which led her to New York where she still resides. There, she studied with such jazz luminaries as Javon Jackson and John Riley, and recorded with Renee Rosnes, Peter Washington and Lewis Nash. She was also named as a semifinalist in the 2004 Thelonious Monk International Jazz Competition.

Jo Lawry’s performing career since arriving in the US has been exciting and varied. She has performed and/or recorded with Jon Faddis, Clark Terry, and Hal Galper to name a few. Recent projects as a ‘sideman’ have been with Donny McCaslin and Allan Harris, appearing at venues ranging from NYC’s Blue Note and Jazz Gallery to the Kennedy Center in Washington, DC, and collaborations with Kate McGarry and Peter Eldridge have yielded performances at Birdland, the Jazz Standard and Joe’s Pub. Jo is also Artist- in-Residence at the United States Embassy of Australia and has given multiple command performances for both the current and previous Australian Ambassadors.

Most recently, Jo performed with Bobby McFerrin at Carnegie Hall, and has joined the Fred Hersch Pocket Orchestra, a new quartet led by Mr. Hersch. Jo is currently featured as guest vocalist on two new releases for Palmetto Records: Kate McGarry’s “If Less is More… Nothing is Everything” (released August ‘08) and Dr. Lonnie Smith’s upcoming album (scheduled for release early ’09.)

Jo leads her own quintet which performs in and around NYC, appearing regularly at notable jazz venues such as the 55 Bar and Cornelia Street Café. With this group, she recorded her debut CD as a leader featuring her own compositions and arrangements, titled ‘I Want To Be Happy’, released October 21, 2008.

Off Tour With Sting, Laila Biali Is In Residency At Subculture May 10,...

Debut CD by Vocalist Jo Lawry, "I Want to be Happy", Released Today

“I was completely knocked out. She has an incredibly pure voice with faultless intonation.” - Jason Crane, The Jazz Session “She’s a phenomenal singer.” - ABC TV (Australia) “Jo Lawry is the real thing — a true jazz singer with awesome musicianship, a wonderful instrument and a fearless attitude.” - Fred Hersch “ With perfect intonation and the swinging feel of an instrumental soloist, Lawry injected fresh life into every piece, using perfectly timed, expressive phrasing, and some smart scat.” - John McBeath, The Sunday Mail 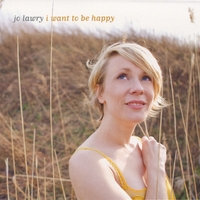 I Want to Be Happy

All About Jazz musician pages are maintained by musicians, publicists and trusted members like you. Interested? Tell us why you would like to improve the Jo Lawry musician page.