BY JOHN KELMAN
January 6, 2015
Sign in to view read count 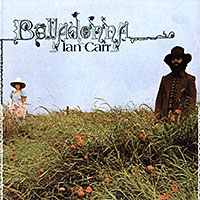 A album I'd not heard in the decade since I wrote the retrospective Ian Carr And Nucleus: '70s British Jazz Rock Progenitors for All About Jazz in the fall of 2004, listening to it again after all these years brought back all the reasons why it's been one of my favorite recordings in the late British trumpeter's catalog.

By the time Belladonna was released in 1972, after three albums recorded with his flagship Nucleus band—1970's Elastic Rock and We'll Talk About It Later, and the expanded lineup of 1971's Solar Plexus, all on Vortex—the band that Carr had brought together had all but completely fallen apart. Gone were founding members pianist/reed multi-instrumentalist Karl Jenkins and drummer John Marshall for greater fame in the increasingly jazz fusion-centric Soft Machine, bassist Jeff Clyne for the similarly inclined Isotope, and guitarist Chris Spedding for session work and his own solo career.

Belladonna would turn out to be a turning point for Carr; featuring more atmospheric excursions like the opening title track, where Macrae's Fender Rhodes and Beck's Wurlitzer combined to create an ethereal underpinning for the emergence of Babbington's relaxed but relentless, repetitive bass line—a signature skill for the bassist that made him a British alternative to Miles Davis' bassist at the time, Michael Henderson. While the early Nucleus records were great, with Belladonna Carr seemed to finally "get" the fusion of jazz with rock, the blending of the two more seamless and natural than what came before. His own playing was as strong as ever, whether with a open bell or a Harmon mute, and Carr's playing had reached a new level of confidence and strength.

But the reason why Belladonna stands out in Carr's discography is the participation of a 26 year-old guitarist whose only previous recorded appearance was with English progressive rockers 'Igginsbottom and its sole release, 1969's 'Igginsbottom's Wrench. The approach to harmony and a legato playing that would define the guitarist for decades to come was still in its early stages, and he'd yet to find the tone he was looking for, but on the strength of just two solos—the Phrygian "Remadione" and, in particular, his absolutely incendiary solo that concludes the fiery album closer "Hector's House"—Holdsworth elevated a good album to not just a great one, but an important one, Clean toned, his lightning speed and unusual approach to creating cascading lines made clear that this was a guitarist to watch, even as, throughout the rest of the record his accompaniment support is, indeed, pretty pedestrian...even resorting to some Shaft-like wah wah-driven chunky chords on "Mayday," a tune that, with its hi-hat-driven pulse, seems clearly informed by Miles Davis' seminal 1969 album, In a Silent Way (Columbia).

Within five years Holdsworth would be world famous, playing with everyone from Soft Machine and the New Tony Williams Lifetime to Gong (see the Rediscovery column about that group's Gazeuse!), Jean-Luc Ponty and Bill Bruford—both in the drummer's own group and together with him in the progressive rock supergroup, UK. But it all started here, with Belladonna and two solos totalling no more than three or four minutes, but enough to truly shake the music world and lead to a career that has influenced multiple generations of guitarists, from Eddie Van Halen to Scott Henderson and Alex Machacek.