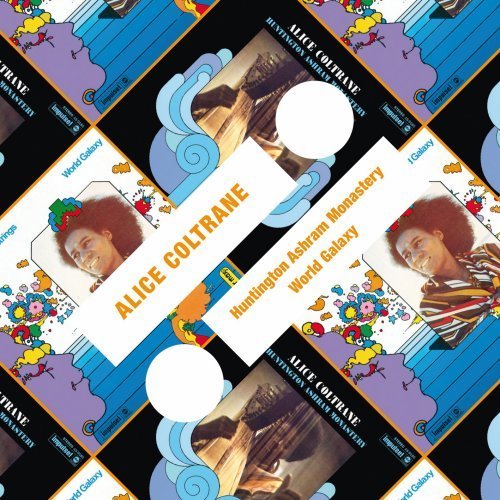 Composer, pianist, keyboard player, harpist and bandleader Alice (McLeod) Coltrane married John Coltrane in 1965. She played in her husband's band until his passing in 1967 but his influence remained strong throughout her music thereafter. Few of her albums reflect this influence more strongly than Huntington Ashram Monastery, recorded in 1969, and World Galaxy, recorded in 1971, here combined as part of the Impulse!/Universal 2-on-1 Impulse! reissue series.

Huntington captures a trio date with bassist Ron Carter and drummer Rashied Ali, who picked up for Elvin Jones in John Coltrane's band and helped propel 'Trane into his most "free" jazz. Its title track, originally composed as a solo harp piece, and "Parmahansa Lake" pivot their internal (meditative) and external (exploratory) faces upon the fulcrum of Carter's repetitive, throbbing bass, even though their swirling movements and rhythms, especially from Coltrane's harp, sound static, nearly floating. "I am especially pleased with Ron Carter's playing on this album," she wrote in Monastery's original notes. "His ears are harmonically attuned to higher chord progressions."

Coltrane moves from harp to piano for "Via Sivanandager" and "Jaya Jaya Rama" and the piano's less heavenly, more temporal sound seems to root them in more earthly styles. The spiritual overtones, and multiplicity and sheer volume of her notes, impart such majestic jazz power to "Via Sivanandager" that the comparison to McCoy Tyner, another of her husband's most famous sidemen, seems almost too evident. Her piano roots "Jaya Jaya Rama" in the blood, sweat and tears of the blues.

The meditative sound cloud World Galaxy sounds like music more meant for hearing than listening, which makes its eventual #12 peak in 1972's jazz charts seem even more curious. You've got to admire the vision—and perhaps even the courage—behind her sprawling reorganization of "My Favorite Things," one of her late husband's most famous favorites: Coltrane's electric keyboard picks up the melody for the first few measures, then begins to toy with it like Sun Ra and soon launches the melody into improvisatory overdrive, all wrapped in the first of many pirouetting, brilliant string arrangements.

The prayerful trilogy "Galaxy Around Olodumare," "Galaxy in Turiya" and "Galaxy in Satchidananda" feature these same lush strings surrounding Coltrane's organ, tamboura and harp, which flutters within and around the sound like a winged angel.

"A Love Supreme" transforms her late husband's familiar music into a genuine musical experience—a religious musical experience centered around the sacredness of the word "love" and the nature and name of God which opens with the pronouncement of the word: "Love. Love is a sacred word. Love is the name of God..." The music accompanying Swami Satchidananda's meditation is also led by the epic, dramatic almost cinematic string section and ornamented by Coltrane's rippling celestial harp. She introduces this song's second half by noodling out the chant "A love su- preme" on electric organ, and then explores its outer limits while bassist Reggie Workman and drummer Ben Riley (who injects what we'd call today some hip-hop thump) slowly build a rampaging funk leviathan underneath.