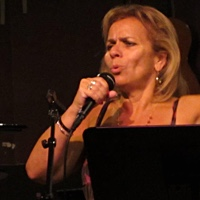 Melissa Kassel, glad to say, dares to be different and real imagination and passion to her close study of tone, intonation, and phrasing on <em>Live at the Acton Jazz Café</em>.

Melissa Kassel is renown for her bold and expressive vocal style that has been praised by both music critics and jazz enthusiasts throughout the world. She is an evocative performer whose sensitivity to the nuances of words and phrasing, unique use of microtones, and raw passion, enable her to transcend to the “cutting edge” of jazz vocalization She is a challenging, risk-taking jazz vocalist whose interpretations of standards have inspired comparisons to Betty Carter and Sheila Jordan; at times, she also brings to mind the underrated Jeanne Lee.

Kassel, however, never sounds like she is emulating any of her influences; the singer is fairly original and has a recognizable style of post-bop. While Kassel brings sensitivity and vulnerability to her performances, she isn't the sort of singer who is willing to do anything-and-everything to be accessible. Kassel can be abstract and cerebral, and like Carter, Jordan, and Lee, she is someone who needs to be accepted on her own terms.

“As a contributing editor to DOWNBEAT and JAZZIZ among other publications, I’ve heard countless debut albums from women singers that are safe, pleasant, and, well, forgettable. Melissa Kassel, glad to say, dares to be different and real imagination and passion to her close study of tone, intonation, and phrasing on “Live at the Acton Jazz Café.” .. —FRANK-JOHN- HADLEY

All About Jazz musician pages are maintained by musicians, publicists and trusted members like you. Interested? Tell us why you would like to improve the Melissa Kassel musician page.