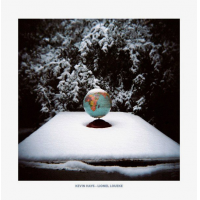 New York/Paris-based Newvelle Records, the vinyl-only subscription label, is well into its second season of six planned releases. The second of these albums is the Kevin Hays and Lionel Loueke duo outing, Hope. Pianist Hays plays with his namesake trio as well as the Bill Stewart Trio and has worked with Sonny Rollins, Benny Golson, Ron Carter, Joe Henderson, Roy Haynes, John Scofield, Chris Potter, Brad Mehldau and many others. Lionel Loueke is a Benin native who holds a Jazz Performance degree from Berklee and has played with numerous top-shelf jazz artists including Herbie Hancock, George Garzone, Wayne Shorter, Charlie Haden and John Patitucci.

Side A opens with Hays' composition, "Violeta," a fast-paced Latin-flavored tribute to Brazilian singer Milton Nascimento. The quirky rhythm and odd meters give it the feeling of loosely controlled free playing. The title track, a reflective ballad written by Loueke, is dominated by his appealing guitar work; Hays adding accents before his pastoral solo takes the piece to its conclusion. The tempo picks up again with "Aziza Dance" named for a mythical Beninese god of inspiration. The first side of the disc closes with "Feuilles-O," a Haitian song about a medicine man treating a young patient. Loueke contributes a vocal in his native language with Hays providing harmony.

The B-side opens with "Milton," Hays' second tribute to Nascimento. His falsetto introduction gives way to an energetic cadence -piano and guitar at times acting as one organic instrument. Loueke's "Twins" is a personal reflection on human interaction set to an appealingly off-kilter rhythm. "Veuve Mallienne" is a Mali inspired anti-war composition set in a dramatic swirl of voice, piano and guitar. The album closes with Hays' lyrics bringing spiritual significance to "All I Have."

Hays is a native of one of the most affluent zip codes in the U.S. while Loueke was born in a part of Africa that suffers from one of the world's lowest literacy rates. Despite their many differences, there is a contemporaneousness and harmony between these two artists that transcend their roots and goes straight to the heart of their common purpose. Hope is an elegant album from two masters with ambitious aims and the talent to convey their message in sublimely stylized manner.

Side A: Violeta; Hope; Aziza Dance; Feuilles-O. Side B: Milton; Twins; Veuve Mallienne; All I Have.