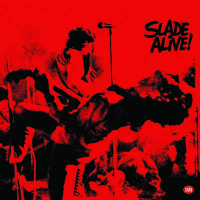 In 1972, when Slade Alive! was released, I didn't know my ass from a hole in the ground about music, but I did know that anytime "In Like a Shot From My Gun" and "Darling Be Home Soon" played on KAAY's ("the Mighty 1090") late Friday night Beeker Street, hosted by Clyde Clifford, it ground my psychic adolescent bones into radioactive dust. Noddy Holder's high Staffordshire metal lilt was at once virile and menacing (this was before the silliness of "Mama Weer All Crazee Now" and the premature ejaculation of "Cum on Feel the Noize") and Dave Hill's guitar was sloppy and relentless. This music was like the blasting caps your mom always warned you to stay away from.

Slade made a pretty good period-cover band. Slade Alive! contained Ten Years After's "Hear Me Calling," the Loving Spoonful's "Darling Be Home Soon," and Steppenwolf's "Born to the Wild," all reminding me why I love the original performers. In addition, the band channeled one Chuck Berry on "Keep on Rocking" and Little Richard on "Get Down and Get With It." These things are so obvious almost 50 years later.

Did any of this music survive the intervening 45 years? No, not really. There has been a load of this music better produced since them. The Georgia Satellites were bastard progeny of Slade who perfected the band's goodtime, boozy performance style. Ten Years After were a better contemporary band who could rock equally hard, but with a light year more of finesse. Oddly, Slade makes me think of Wishbone Ash, whose Argus is forever branded in my murky subconscious. Wishbone Ash was everything Slade was not: refined, smart, progressive. Slade's antithesis, in other words. But there is a place for Slade's complete disregard for properly-tuned guitars and studio overdubbing. What Slade was about was honesty delivered from the barrel of a completely violated Fender Telecaster. When I hear this music it is from the event horizon of the early '70s, when even the worst music was still pretty good. Critic's Note: Anno Domini 2017, marks both the 100th Anniversary of recorded jazz, deftly noted by the release of the shellac "Dixieland Jass Band One-Step (A)/Livery Stable Blues (B)," Victor 18255, recorded February 26, 1917 and released March 7, 1917. My father was 18 months old and my mother was yet to be born for two years. It is also the twentieth anniversary of me writing for All About Jazz. The first recording I reviewed for the magazine was Art Pepper's San Francisco Samba (Contemporary, 1997), published December 1, 1997. I am using this present article as part of a series noting my twentieth anniversary with the magazine and paying special tribute to my fellow writers at All About Jazz and Publisher Michael Ricci.

Hear Me Calling; In Like a Shot From My Gun; Darling Be Home Soon; Know Who You Are; Keep on Rocking; Get Down With It; Born to the Wild.