Hamid Drake and Bindu: Reggaeology at the London Jazz Festival 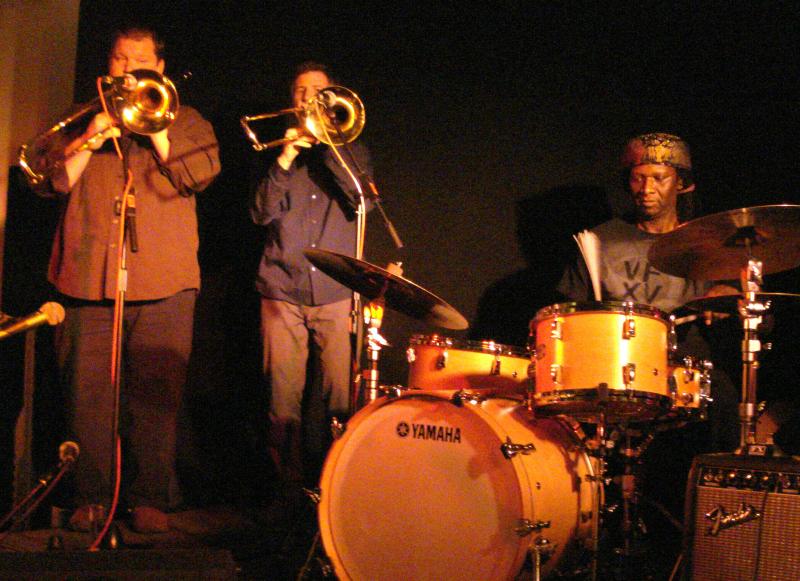 BY JOHN SHARPE
November 25, 2010
Sign in to view read count
Hamid Drake and Bindu
Baltic Restaurant/London Jazz Festival
London
November 14, 2010
It's been a long time since the avant-garde has conjured thoughts of dance. You would have to go all the way back to the early days of the Swing era. But that's what came to mind on the third night of the London Jazz Festival. This was the second incarnation of legendary drummer Hamid Drake's band Bindu to tour, coming to the slightly incongruous setting of London's Baltic Restaurant in Southwark, on last night of a 7-leg European jaunt. While the food was good, the music was better, making it tempting to kick aside the tables and chairs and create space for dancing to the infectious beats.
To start, trombonist Jeb Bishop orchestrated punchy horn and guitar outbursts framing a drum concerto for Drake who floated around his kit to crisp but explosive effect at mesmerizing speed. Seamlessly using his elbows to modulate the timbre of his tom toms, the leader ably demonstrated why he has been the drummer of choice for an ever increasing roster including David Murray, Pharoah Sanders, Peter Brötzmann, and most significantly bassist William Parker in whose company he has squared the circle of how to swing to free jazz around the globe. It was all done with an effortless charm and Drake's beatific smile was displaced only by a broad grin to show his appreciation of some felicity by the band. Soon the opening salvo opened out into a choppy reggae riddim, with a lilting melody from the twin trombones of Bishop and Jeff Albert.
Bindu 's reggae cadences formed the hook on which to hang their brand of improvisatory magic, over one long set of 90 minutes including an encore. Alongside Drake were the cast reprised from the band's third recording Reggaeology (Rogue Art, 2010) with a similar program of rhythmic alchemy, horn section through-a-looking-glass interjections, and vocal dynamite from human beatbox Napoleon Maddox. Live, extended renditions of tunes allowing greater scope for individual expression, combined with a new book of material, made for an even stronger performance.

Having worked together since 2006 when they hooked up to form Lucky 7s, it was no surprise that the two trombones spent much of the evening hanging on each others coat tails, phrasing as one, veering between seat of the pants counterpoint and raucous support for each other's solos. New Orleans resident Albert boasted the fuller tone, and brought with him some of his natal cities' second line sensibilities, while Bishop tended more to the abstract and dissonant. Both took fine features: Bishop's muted 'bone on his own "Fred's Gift" was particularly noteworthy, while Albert tore it up with the plunger mute on "Mother Kali's Children No Cry." 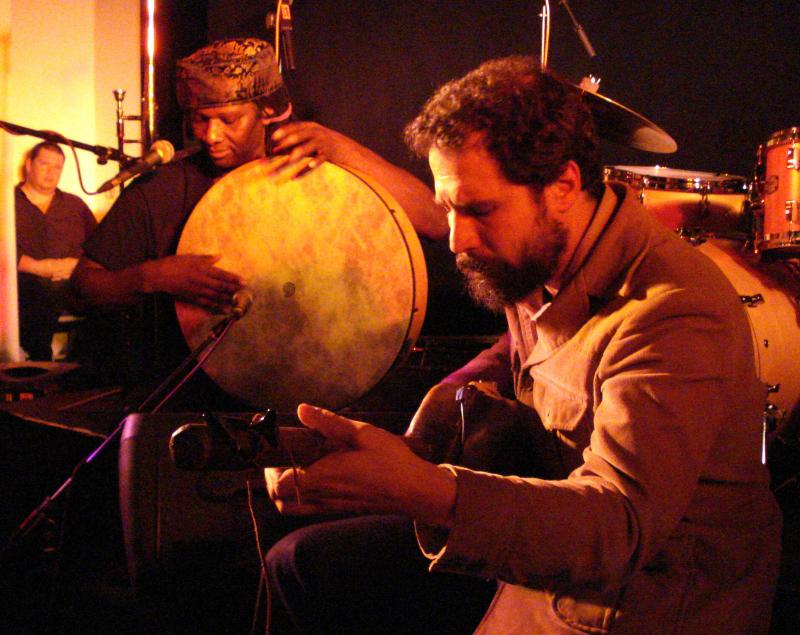 On bass Chicago's Josh Abrams proved supple but tenacious, varying the rhythm to ensure that the beat never got stale. It helped that he has performed extensively with Drake, documented beyond Bindu on the late Fred Anderson's From The River To The Ocean (Thrill Jockey, 2007) and the pair's telepathic give and take on the their mid-set duet, when both came and sat down front, the drummer on frame drum and Abrams on the Moroccan guimbri, established that beyond doubt, cycling through a series of improvised grooves as Drake intoned an African sounding chant.

Rounding out the band, confirming the Chicago connection, was electric guitarist Jeff Parker, also scheduled in the festival the following night with the acclaimed post-rock group Tortoise. Here he was content to stay in the background for much of the time, chopping out the guitar backbeats integral to the rootsy sound, when not stepping out with cleanly picked chiming single note runs, spinning out from the heads or initiating echoing dub atmospherics.

Maddox was in his element, whether revelling in the interplay with Drake or layering his distinctive vocal hip hop stylings into the mix. In some pieces there was the opportunity for extemporized raps, including one passionate tale of the hassles befalling the travelling musician when trying to negotiate precious instruments through airline check-in procedures to keep them out of the cavalier grasp of the baggage handlers. There were a couple of spots where the Cincinnati native was able to test his mettle against Drake, shooting out rhythmic challenges, to which the leader responded once he had absorbed the meter, a wide grin creasing his face as he threw Maddox' inventions back at him.

From the delight on the musician's faces it was clear they had as much fun playing as the audience did listening to a wonderful evening of joyous music which kept bodies popping and minds whizzing.