BY HRAYR ATTARIAN
September 28, 2009
Sign in to view read count 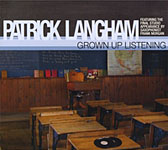 Artists' early works generally channels the various influences and styles they have been exposed to during their development. What makes a debut unique is the way the different influences fuse and what the musicians can add to the mix themselves.

Alto saxophonist Patrick Langham's Grown Up Listening is a perfect example. Langham is an associate professor of jazz studies at the University of the Pacific Conservatory of Music and a distinguished educator. He has taught various workshops and held positions at other colleges including the Brubeck Institute. His CD, however, is far from a dry academic exercise; instead, it's a highly listenable and creative work demonstrating his skills as composer, interpreter and improviser to great effect.

Langham is adept at playing blues, waltz, funk and fast paced bop with equal facility. His influences range from Dizzy Gillespie, Donald Brown to Dave Brubeck and Frank Morgan.These four are well represented here—not only in their compositions, but in Langham's own writing as well. The variation in style and genre is far from incongruent, keeping the music interesting.

The altoist's sound is derivative of Art Pepper at times, with a hint of Cannonball Adderley—especially on Donald Brown's "Girl Watching," where Frank Morgan appears on what would be his last recording. Despite the older musician's experience, Langham's nascent sound remains the dominant voice.

The other musicians on the record complement Langham's playing extremely well. Both trumpeters are sympathetic front line partners on the quintet sessions and the rhythm section, led by talented pianist Joe Gilman, not only provides support for the horns, but contributes layers of complexity to the music.

Even though Langham's sound is not yet fully formed, Grown Up Listening is a well accomplished homage to his influences and an exciting portent of things to come.